A peep into the portrayal of Tipu Sultan by British artists two centuries ago offers a new understanding of the 18th century Mysore ruler's formidable resistance against foreign colonisers.

'The Last Effort and Fall of Tippoo Sultaun' by Henry Singleton, an oil on canvas painted in 1802, is the heart of the DAG exhibition.

Soon after the defeat and death of Tipu Sultan during the Fourth Anglo-Mysore War in 1799, British soldiers went on a looting spree, pocketing coins, and taking off with carpets and clothes from the sultan's belongings in his capital Seringapatam (now Srirangapatna in Karnataka). Back in London, a medal was issued in honour of the victory, showing a British lion mauling a Mysore tiger. As the British colonisers realised the strength and power of the Mysore ruler and his father Haider Ali, both of whom kept the East India Company's territorial ambitions in check in the region for over three decades between 1767 and 1799, there were several plots at work to garner the support of the British public. One of them was to paint a glorifying picture of the British generals and military fighting against a 'ruthless tyrant', literally.

There were many British artists who produced works that bore the label of a propaganda war against Tipu, called the Tiger of Mysore because of his perceived bravery and the symbol of his kingdom. Most of these artists didn't even travel to the theatre of war. One such, Robert Ker Porter, hastily put together a 120-foot-long painting, all in six weeks, in April 1800 for a show at London's Lyceum Theatre that had earlier exhibited "exotic animals" like zebras, rhinos and ostriches.

Porter's The Storming of Seringapatam, the victory medal of the mauling of the Mysore tiger and many other paintings from a nearly half-century period before and after the defeat of Tipu are part of a new exhibition, "Tipu Sultan: Image & Distance", in the national capital. The exhibition by DAG at The Claridges has 92 works, most of them original prints of paintings by British artists whitewashing a war on an alien land.

There was a feverish pitch in creating a flattering visual narrative in favour of the East India Company and British military leaders who fought against Tipu, mainly Richard Wellesley, who later became the prime minister of Britain, general David Baird, and Charles Cornwallis (a Governor-General of British India). The prints made from these paintings were all marked to 'The Honourable court of Directors of the East India Company' and 'The King most Excellent Majesty'.

"These are triumphalist works of art made for the British audience then," says Delhi-based art historian Giles Tillotson, who has curated "Tipu Sultan: Image & Distance", open to the public for two months. "It gives you a sense of how the British public was sensitive to the supposed threat from Tipu Sultan. Made in the course of the war and Tipu's eventual defeat, these artists were partly cashing in on the existing interest among the British public and also stoking it," he adds.

The Last Effort and Fall of Tippoo Sultaun by Henry Singleton, an oil on canvas painted in 1802, is the heart of the show. Singleton, who read the reports sent home by British army officers, imagined the defeat of Tipu to manoeuvre his brush strokes towards total capitulation by the sultan in the face of British military dominance. The work, acquired by DAG's MD and CEO Ashish Anand two years ago in London, proved to be the point of departure for the exhibition. "Ashish Anand showed me this big Singleton painting two years ago. He was interested in knowing what else could we acquire," recalls the British-born Tillotson, senior vice-president for museum exhibitions and content at DAG. 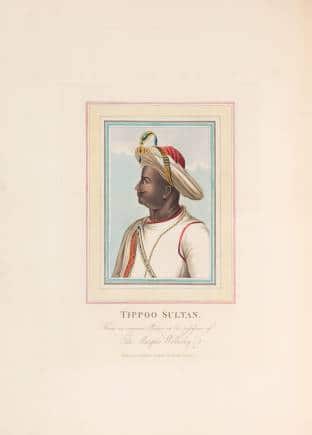 An 1810 portrait of Tipu Sultan by Edward Orme

The paintings on Tipu stand out in scale and size compared to works by British artists on other Indian rulers and wars. "There is nothing comparable. There were portraits of nawabs and images of 1857 (first war of independence), but nothing on the same scale," says Tillotson, one of the curators of DAG's "Drishyakala" exhibition at a newly-restored British barrack inside the Red Fort three years ago. Oriental Scenery, the section curated by him, showed the works of British landscape artist Thomas Daniell and nephew William Daniell during their tour of India between 1786 and 1793.

Most of the paintings on Tipu mounted at the DAG gallery in Delhi have never been seen before in a public exhibition in India. The last major exhibition on Tipu was in 1999 in Edinburgh, Scotland. "It is the first time we have assembled a body of works on Tipu Sultan to show in an exhibition in India," explains Tillotson, who adds that several former Indian princely states acquired "quite a lot" of these works in prints in the early 19th century. A nine-foot-long print (same size as the Delhi exhibit) of Porter's mammoth painting, The Storming of Seringapatam, is still on display at the Jaipur City Palace museum. "Why would a Maharaja require this painting? Was it because he is aligning with a British view of history or he is actually thinking here is a picture of someone who resisted the British rule, as an example of India at least attempting to fight back? They could even plausibly have done both simultaneously," says the curator. The painting by David Wilkie.

First-hand reports by military officers on the campaigns in Mysore and newspaper reports about the Anglo-Mysore wars which were a hot topic then provided the source materials for artistic representation. It took months for news to arrive in London. News of Tipu's death in May 1799 reached England only four months later in September. "It was not like the Ukraine war which you can now follow by the hour," says Tillotson. Among the artists who arrived in India were Robert Home, a professional portrait painter who came in 1791 and remained in India for the rest of his life, artillery officer and military artist James Hunter, and surveyor Robert Colebrooke.

The exhibition, which comes at a time when there are attempts in Karnataka to rewrite history books on Tipu, offers a new understanding of the formidable resistance against a foreign coloniser by the Mysore ruler. It also shows how the canvas of artistic creativity was hijacked for a theatrical spectacle and pursuit of political hegemony. "We have seen that the British depictions of Tipu are largely, of course, unflattering. But it is important to know what that perspective is," says Congress MP Shashi Tharoor, who inaugurated the exhibition on May 25.

"The fact remains that Tipu is part of our history," says filmmaker Muzaffar Ali, among those viewing the show on its opening day. "He was progressive. Among the many new things he started was sericulture in the country, which created jobs and continues to create jobs even today," he adds. If there is a celebratory exhibition on Tipu in England today, Tillotson says people will rigorously question the morality of the fighting in the first place.
Faizal Khan is an independent journalist who writes on art.
Tags: #Anglo-Mysore War #ART #General Sir David Baird Discovering the Body of the Sultaun Tippoo Sahib by Scottish artist David Wilkie #Robert Home #Robert Ker Porter #The Body of Tippoo Sultaun Recognised by his Family. Finding the Body of Tippoo Sultaun #The Last Effort and Fall of Tippoo Sultaun by Henry Singleton #The Storming of Seringapatam #The Surrender of Two Sons of Tippoo Sultan #Tiger of Mysore #Tipu Sultan #Tipu Sultan: Image & Distance
first published: Jul 30, 2022 07:15 pm