Healing Space | Who are we cancelling today?

Is cancel culture just another version of mob justice? What you need to know before you participate.

Monica Lewinsky may have been Patient Zero, but each of our social set-ups bears a rap sheet of slut-shamed women, molesters, harassers, bigots, or simply people who made mistakes and poor choices from which there is no return. Cancel culture has a detrimental effect on how we perceive what justice is. And its participants, like any mob, carry the conviction of self righteousness.

Cancel culture has undeniably emerged as a powerful tool for turning the tables on a broken system, the oppressed acting against the once-privileged. People typically take to collective action when their faith in the power of individual action is depleted or laced with fear. You don’t believe you will get justice as an individual. So it moves to reputational justice and the cover of a group.

Here’s the problem, though: so does a mob. The greater story and ‘reputation’ wins a spontaneous verdict. Those who don’t have sufficient voice or platform to tell their story, or a support system of influencers to believe it, lose. It is constituted by anonymous people who depersonalize; that is, who do not operate as individuals owning their well-weighed decisions, but who get to blend their ‘verdict’ with the larger validation of group. It offers identity without accountability, making socially unacceptable actions acceptable. You wouldn’t call your neighbour’s boss and ask for them to be fired if it could be known that you had done it, but within the group you can because your responsibility for the consequences are diffused. The burden of the backlash - their unpaid bills or inability to support their family - is not your problem alone. It is nobody’s problem anymore. The choices or actions are carried on the momentum of peer pressure, whether to storm Capitol or the minority basti, or silently exclude an individual from social participation, and are nobody’s fault.

Wait, one of these is offensive and one is defensive, so it seems fair. Social exclusion may feel like fair retaliation, after all it is only a withdrawal of attention, a negation of reputation, and does not cause physical harm. But we tread a fine line. It is on the basis of reputation, a quickly circulated whisper, that mass mobs align themselves. Such exclusion is exactly what slain social justice activist Narendra Dhabolkar campaigned against, instituting the only law against it in the country, The Maharashtra Prohibition of People from Social Boycott (Prevention, Prohibition and Redressal) Act, 2016. Social exclusion has been weaponized against nomadic tribes, the erstwhile ‘criminal’ tribes, and several castes and communities. We have record of people dying by suicide, or left to die for want of critical resources, opportunities, and medical attention, due to such ostracisation. Typically, people doing the withholding are privileged by the larger group. Cancel culture aligns with the conventionally-held standpoint often boosted by the media narrative. We also know some, like men, get rehabilitated from reputational loss more easily than others. As with any court of law, what of cancellations by consensus, that get the basis for this conviction-without-trial wrong? Whether it’s Britney Spears or Monika Lewinsky, few have the visibility, mental strength or financial resources to relocate, start afresh, tell their story, or remain standing long enough for the mob to dissipate or re-evaluate its stance. All individuals seek identity, belonging, productivity, and social validation within the larger group. The withdrawal of it is worse than a conviction in a criminal court – it is designed to destroy an individual’s sense of personhood.

We need to start taking more civil suits to court where justice is not only seen to be ordered but upheld as precedence. Courts of law are designed to remove emotion from the equation, and distinguish between justice and vengeance. In the interest of the principles of natural justice, even when the case seems to have a clear perpatrator according to public opinion, the sentence can only be in proportion to the evidence and arguments presented on both sides, audi alterem partem. It offers the convicted opportunities for furlough, re-investigation, parole, even employment, education or pardon. Further, a verdict offers finite sentencing. Someone who has served their time, even for murder or rape, should be seen as having paid their dues and worthy of a second chance.

Cancel culture makes no such allowances and delivers the maximum social penalty for willful wrongdoing and just not knowing better alike. It carries justice on a wave of sentiment. It also offers no space for progenitor causes like the inadequacy of the perpetrator’s own developmental schemas, their trauma or abuse, and offers no chance of reprieve, transformation or growth. The more we hold people to an arbitrary standard, we continue to fail to empower individual action and our notion of justice will change depending on who has social dominance at any given period of time. 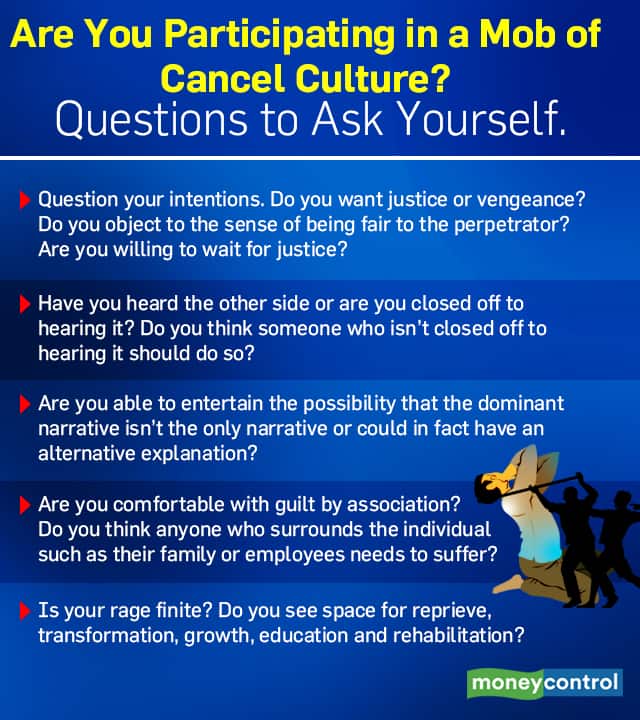 Gayatri Jayaraman Gayatri is a mind body spirit therapist and author of Sit Your Self Down, a novice’s journey to the heart of Vipassana, and the forthcoming Anitya, a guide to coping with change. [ @G_y_tri]
Tags: #Cancel Culture #culture #Healing Space #Health #Internet #mental health #social media
first published: Sep 25, 2021 09:36 am