An online art exhibition opening April 30 at the new Science Gallery in Bengaluru will take viewers on an incisive journey through the history and science of outbreaks.

The house of German bacteriologist Robert Koch, who discovered the cycle of anthrax disease and causative agents of tuberculosis and cholera, in Wolsztyn, Poland (Photo courtesy: Robert Koch Institute, Berlin).

Hong Kong had just celebrated the famous Lantern Festival to mark the Chinese New Year when a 64-year-old doctor from the coastal province of Guangdong checked into the Metropole Hotel to attend a family wedding. Epidemiologists remember the day - February 21, 2003 - as the beginning of the Severe Acute Respiratory Syndrome (SARS) outbreak, as the doctor went on to infect 16 hotel guests, each of whom took SARS across the world.

A Cluster of 17 Cases, British artists' group Blast Theory's new work, re-enacts the fateful night to understand the "banality" and "randomness" of infectious diseases. Part of a new exhibition, titled CONTAGION, at the Science Gallery Bengaluru, the artwork uses the interactive tools of the internet and expertise of epidemiologists to scour the hotel virtually for clues to the transmission.

"In A Cluster of 17 Cases we are exploring how we all respond to uncertainty and the unknown," says Blast Theory's Matt Adams about the group's 2021 work. "One of the most terrifying aspects of a pandemic is that disease is hidden and spreads unpredictably. Even those who are closest to us and whom we trust the most can infect us," adds Adams. 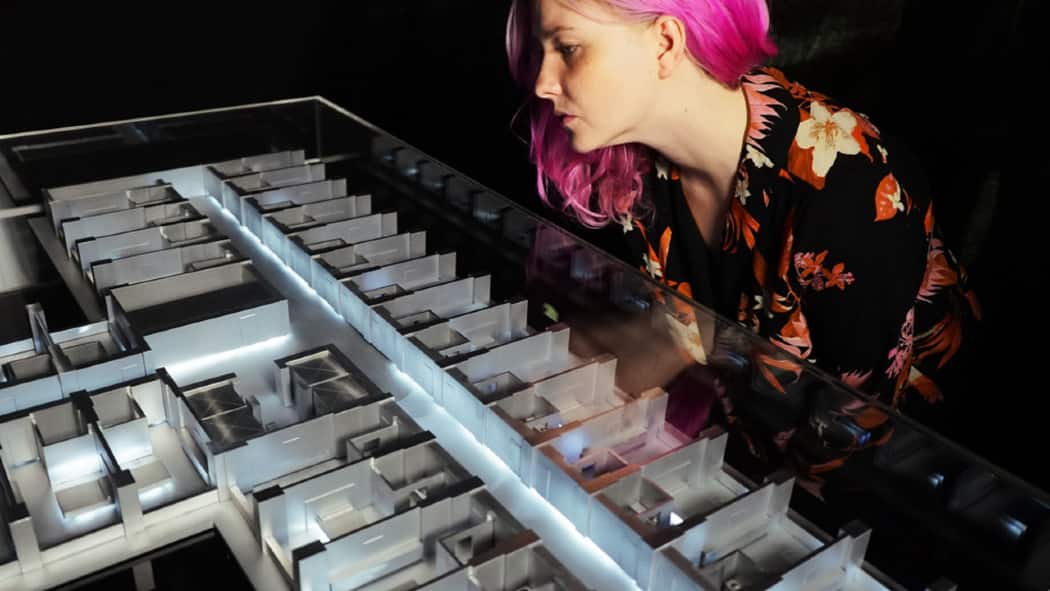 Adams says there is no evidence that any of those who got sick at the Metropole Hotel ever met each other. "None of the staff at the hotel caught the disease. To understand what happened, researchers visited the hotel and conducted tests in the corridors. They released smoke to see which way the air flowed. Even today there is no definitive answer as to what happened. The likeliest explanation is that the doctor vomited in the hallway and the others inhaled the aerosolized particles," adds an artist-member of Blast Theory, which was embedded in the World Health Organization's Strategic Health Operations Centre (SHOC) in Geneva for a three-month art residency in 2018. SHOC monitors infectious diseases worldwide.

The Science Gallery exhibition, which begins online (www.bengaluru.sciencegallery.com) on April 30, is the first of its kind in India to use the interface between science and art to engage society in a continuing conversation about the nature and risks of the coronavirus pandemic, a second wave of which in India is causing widespread devastation. A Cluster of 17 Cases joins other works like Contagion in the Twenty-First Century by the Museum of Robert Koch Institute, Berlin, Controlling the British Plague in India by medical anthropologist Christos Lynteris, and Drawing the Bombay Plague by Mumbai-based artist Ranjit Kandalgaonkar.

The carefully curated exhibition includes a host of mediums such as a radio talk by Alexander Fleming about his penicillin discovery, drawings by Indian artist Kandalgaonkar on the Bombay Plague of 1896, mapping of two cholera epidemics almost two centuries apart, photographs of controlling the plague in British India, videos of computer viruses, and a participative exploration of the origins of the most contagious of laughs, to understand the nature, influence and risks of a pandemic.

"The exhibition brings into attention ways in which disciplines across practices think about ideas, behaviour of diseases and contextualise and comprehend the consequences of spread of infectious diseases," says Science Gallery Bengaluru director and exhibition co-curator Jahnavi Phalkey. "As we are living through a pandemic ourselves, the main driver is how do we capture current experience in relation to what we know and what we have experienced in the past," adds Phalkey, a science historian. "The single most important goal is to give people the tools to be able to think and make them ask good questions."

Galleries across the world are responding to a world paralyzed by the pandemic through exhibitions that help people make sense of the suffering. The Smithsonian National Museum of Natural History, Washington's ongoing show, Outbreak: Epidemics in a Connected World, has been extended until November this year. Also in the United States, an online exhibition Future Present: Design in a Time of Urgency examines how the pandemic has influenced the world in a collaboration between Science Gallery Detroit and Michigan State University. 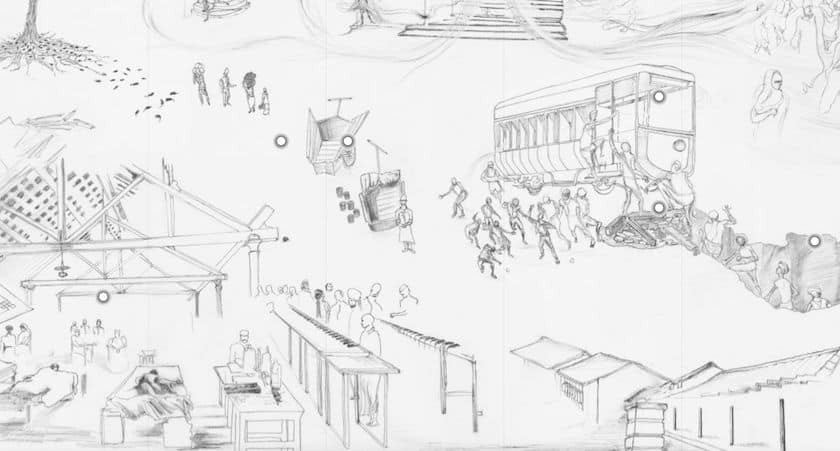 'Drawing the Bombay Plague' is about the 1896 plague (Photo courtesy Ranjit Kandalgaonkar).

Artist and researcher Kandalgaonkar uses drawing to give under-represented facts, figures and people during the 1896 Bombay Plague a voice. "The plague outbreak of 1896 reshaped the 20th century map of the city of Bombay," says the artist about his 2017 work, Drawing the Bombay Plague, which is a major highlight of Contagion exhibition. The work, originally commissioned by the Wellcome Collection museum in London for its show Ayurvedic Man in 2017, evolved from London's Gasworks residency for international artists won by Kandalgaonkar in the same year.

"The state imposes what we call lockdowns today, which are all different versions of the age old Riot Act, i.e., to not allow crowds or rather more than two-three people to convene (12 people back in the 1700s). This is imposed with the intent where surveillance of the state becomes unquestionable, in the name of a public health response," explains Kandalgaonkar about the authoritarian measures used by the British colonial administration to stop the epidemic spreading to Europe.

"The colonial response is staged as theatre. It is done to shock its citizens into acquiescence... So in some sense, one can surmise that we can look at present ways in which (some) governments across the world behave during a public health crisis, we can be sure that is, in fact, reminiscent of some cherry-picked older version of colonial state response," adds the artist.

According to exhibition co-curator Danielle Olsen, living with Covid-19 has highlighted "our connectedness and the importance of nurturing international collaboration". "We very much hope CONTAGION – with its wonderful range of voices and perspectives – provides an opportunity for all to make meaningful sense of these uncertain times,” adds Olsen, international cultural producer at London-based health research charity Wellcome Trust. 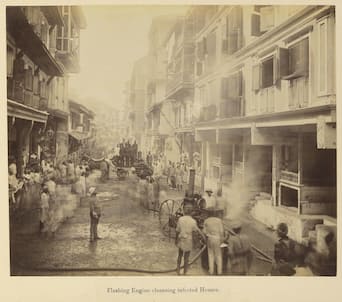 From 'Controlling the Plague in British India'.

The exhibit, Controlling the British Plague in India by medical anthropologist Christos Lynteris of the University of St Andrews, Scotland, tells the story of the third plague pandemic that broke out in Yunnan, China, in 1855 and swept across the globe until 1955, causing the death of approximately 12 million people. The artwork on the first epidemic to be photographed extensively provides a visual narrative that deeply impacted methods of disease control and response across the world.

When the World Has a Laugh by Paris-based visual artist Anais Tondeur is a video installation combining a collection of laughs and a speculative fiction made of laughs whose vibrations give shape to a miniature world. Created for the Bengaluru exhibition during the lockdown, Tondeur's work yields a landscape - the emergence of a world - formed by worldwide laughs. "I was very moved to receive more than seventy-five laughs from Australia, Ireland, Spain, Portugal, France, Morocco, India - in particular from the cities of Bangalore, Durgapur, Pune and Chennai," she says.

Most of the exhibits of CONTAGION were selected from an open call a year ago while a few are commissioned projects. A third of the open call submissions came from India. Developed in partnership with leading international academic and research bodies like German national public health institution Robert Koch Institute, Department of Biotechnology-Wellcome Trust India Alliance and the Indian National Science Academy, CONTAGION has 16 exhibits besides 20 public lectures and tutorials, 16 workshops and masterclasses and five film screenings.