Contest Alert:2 days left to win Amazon vouchers worth Rs 5000. Take the MCPRO Quiz today to grab yours!
you are here: HomeNewsTrendsEntertainment

Review | 'Kuruthi': One of the sharpest commentaries on our times

Actor Prithviraj Sukumaran in 'Kuruthi', a film that talks about faith and violence.

The Internet says that Kuruthi means burnt offering. The only thing that was burnt after watching this film was my heart and soul. This movie yanked them both out and skewered them on a hellfire of truth. Not one, but so many truths, that I am still shook. The Wiki page of the movie says that the meaning of the word is "ritual slaughter". And more than the goat being slaughtered as sacrifice, you realise that your belief system is going to be up for slaughter too.

"Are you the only ones allowed to have religious beliefs? I have them too!" This dialogue comes at such an unexpected moment, it is like a gut punch. But the movie has more to deliver, if only the beginning didn’t feel like a slow, uphill climb in the dark.

The beginning of the movie is so slow, so lame that you almost give up. Here’s yet another bearded guy trampling through the forest who’s had to deal with a tragedy during a landslide. He misses his daughter and wife so much he doesn’t want to move to a place with more people. He chooses to grieve in a remote area of the forest with just another house down hill. The government, the media and the public have forgotten the landslide… The forest covers it all. 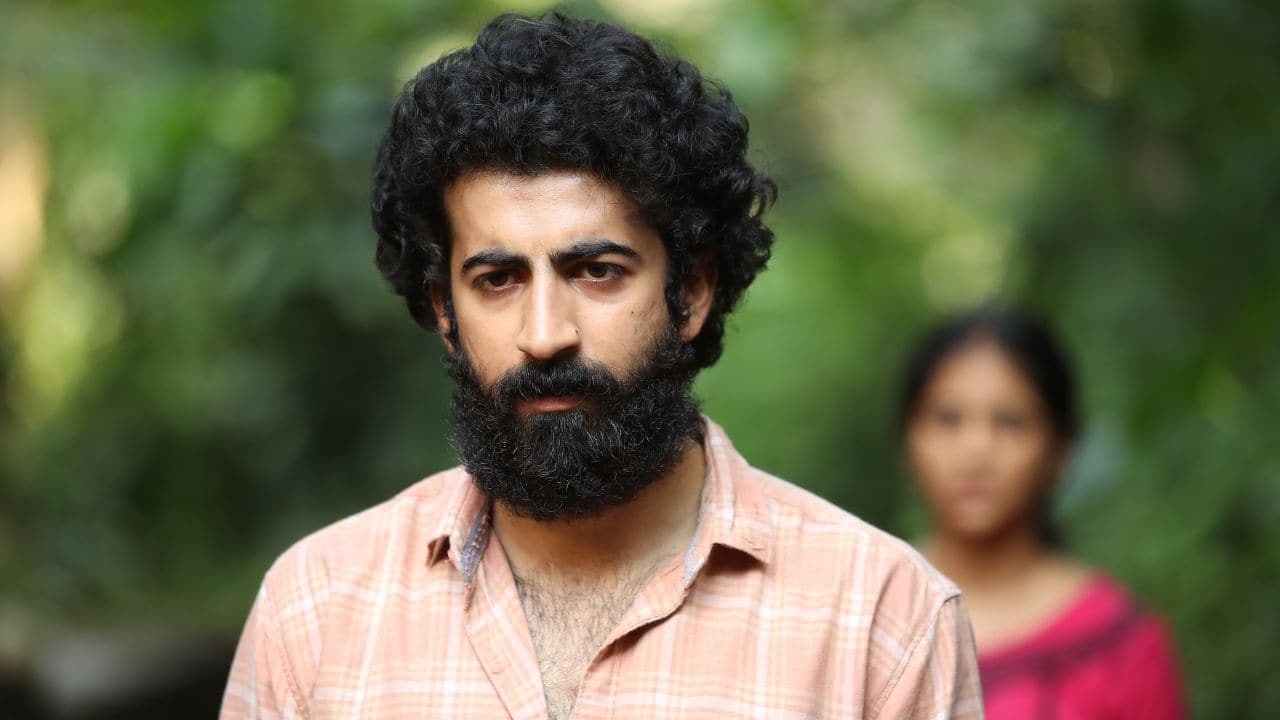 Roshan Mathew as Ibrahim in 'Kuruthi', which released on August 11, 2021, on Amazon Prime Video.

He is Ibrahim (played by Roshan Mathew), who lives with his young, hotheaded brother Resul (spelled Rasool on subtitles) and a crotchety father Moosa, who complains about everything, including the Rajinikanth movie Billa that he’s watching on TV.

Ibrahim’s neighbour is Suma (Srindaa) who comes across as fearless when she confesses her love for Ibrahim; she tell him she will read the Kalma because his religion requires it, but he must let her light a lamp for her Gods in her room. Ibrahim has no courage. He’s too stuck in religious ways to take a bold step like that. Even if there are no neighbours or ‘society’ who would care. Suma lives with a brother who’s mostly drunk (he lost his family in the landslide too). But her love for Ibrahim makes her cook for the three of them and wash the old man’s shirts… The old man Moosa is well named (Moses the prophet, after all). He tells Ibrahim to marry her because then the food she cooks for us becomes her duty, right now when she brings dinner for us, it is her generosity.

But as they wait for Suma to bring them dinner, there is a knock on the door. It’s a policeman - S.I. Sathyan (played wonderfully by Murali Gopi) who has a handcuffed prisoner in tow. Why are they in that house? It gets very dark in the forest and some people were trying to kill this lad…

Resul realises that the handcuffed prisoner has killed someone from their community and knows why he’s a wanted man. There are people who will kill him to avenge a death. The cop confiscates their phones and shuts them all inside. The cop has a gun. Even poor Suma comes to give them food and gets stuck.

The moment the cop barges into that house and raises his head to get that drink of water, he sees the Ayaat on the wall to realise that he, a Hindu, has had water in a Muslim man’s home. This moment is so cleverly inserted in the narrative, if we wore hats, we would doff them at the writer Anish Pallyal and the director Manu Warrier.

More strangers show up, and I’m telling you Prithviraj Sukumaran, whose dimples occupy a permanent place in the pantheon of dimpled stars will make you want to watch the rest of the movie from inside a blanket pulled over your face.

You’ll now wonder why the movie has turned into an avalanche of action, with people locked inside the house, terrified because those on the outside will try all kinds of tricks to get in with an intent to kill… Will Ibrahim, who’s such a wuss in real life, manage to show any spine? Will Resul (young actor Naslen) - his mind poisoned by doctrine - do something rash? Will they all get killed? Poor Suma and the old man!

Speaking of old man Moosa, it was amazing to see that the veteran actor Mamukkoy (450 films, award-winning comic actor) has serious acting abilities. His quiet observations are so apt, you know the writer has managed to find the right character to deliver those searing indictments on the state of our country today. The film has been branded as a political thriller, but when the old man looks at the Hindu prisoner and his hotheaded younger son who spouts similar hateful things but from the Muslim perspective and says, "All that is needed is hate. Man needs to hate someone or something all the time. And to maintain that hatred there will always be ‘them’."

‘A spark is all you need, ‘he says, and has the capacity to keep all of them in control even though he looks feeble and confined to that armchair. But his philosophy is countered wonderfully by someone who is insidious in quoting the scriptures and asks Ibrahim and Resul: Your heart is filled with doubt already, isn’t it? It is the doubt that turns us into slaves. The argument and counter argument seem simple: when both sides have been wronged at one time or the other, what gives you the right to judge and then punish one man?

The old man rightly says, "What do we care about the lives of kings of the past? We are just poor folk trying to make it through the days…"

The cinematography that seems bleak at the beginning, suddenly keeps you at the edge of your seat. There are close-ups of violence lit up by that one oil lamp in the dark house (the baddies have cut the power supply) and a car chase on narrow forest mountain roads. Superb work by Abhinandan Ramanujan.

It’s a sharp dig at the state of affairs in the country when a retired man has to tighten his belt and get ready (like warriors do before a battle) to deal with strangers who have barged into his home, his castle, because his sons cannot handle any crisis. The fact that the bad guy - who relentlessly spouts insidious things into the heads of the two sons - does not die easily is a metaphor for what happens in real life as well. The bad guy says, "They can ban organisations, but they cannot destroy ideologies."

Prithviraj Sukumaran! I never thought I’d be terrified of the guy. Superb! I am amazed at how such a clever and yet well balanced narrative about such issues can be made so brilliantly. I know social media trolls will have a field day. Perhaps not. Someone, somewhere is thinking about how we are all paying the price of Cain’s folly, and doomed to wander about with blood on our hands.

You know what the end is going to be, and yet you hope it won’t be that predictable. But we film crazy folk are an optimistic lot. And life is not. The words of the song stick in my head: Who is the prey? You or me? Me or you?