Now, Bookmyshow on your web browser will work like a mobile app

The distinct feature about PWA is that even on slow networks, the BookMyShow pages will load more than 50 percent faster now,

BookMyShow, one of the largest online ticketing platforms in India, has launched its Progressive Web App (PWA) that offers an immersive app-like experience that mirrors a mobile browser.

The site has been moved to a PWA that aims to offer all the functionalities of the BookMyShow app within the web browser itself.

The Progressive Web App is compatible with Chrome, Firefox and many other web browsers. With this launch, BookMyShow has become the first online entertainment ticketing brand in India to move to PWA. 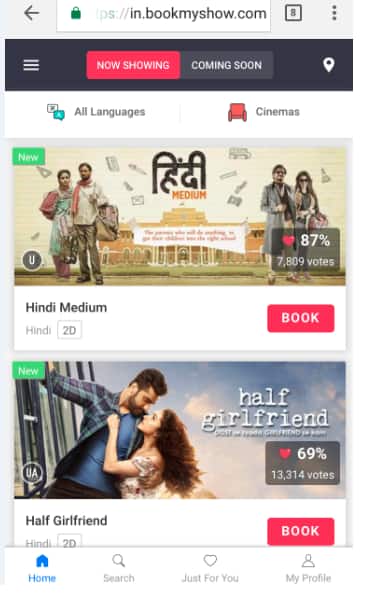 The distinct feature about PWA is that even on slow networks, the BookMyShow pages will load more than 50 percent faster now, and users will also be benefitted from reduced data consumption and increased responsiveness.

With the launch of the new progressive web app the conversion rates have increased by more than 80 percent as compared to the older mobile website. Anish Tripathi, Vice President- Product Design, BookMyShow, said, "The goal was to provide a user experience that was fast, responsive, reliable and engaging – all at the same time. With our new Progressive Web App, we are broad-basing our platform to include those users who either don’t have the space to download a new app or are looking for options that use less data and doesn’t require constant updates."

"We have already seen an exponential increase in conversion rates and expect our new web app to significantly contribute to reaching new users, he added."

The BookMyShow PWA works on React and Redux on the front end, with Node.js and the Service Workers API on the backend. As required by the PWA specifications, you also have offline support on certain parts of the app, like the home page and the current page you're on.

According to the company's observations, page load times even on 2G networks are now as low as 3.1 seconds, with subsequent loads saving almost half that time.