OnePlus Nord review: Should you settle for this one?

We used the OnePlus Nord for a week to find out if it is a OnePlus smartphone worth settling for. Here is our full review of the OnePlus' new phone.

The year is 2014. A new smartphone company called OnePlus launches the OnePlus One as a flagship killer with top-of-the-line specs but priced very reasonably.

Many enthusiasts wanted to get their hands on the new flagship smartphone that costed less than Rs 20,000. One was considered to be among the lucky few to have been able to purchase the OnePlus One, as it was tough to buy the phone, primarily because of OnePlus’ invite-based system.

Jump to 2020 and things have changed drastically. OnePlus is no longer a flagship killer. Instead, the company is now a brand that offers truly flagship-grade smartphones like the OnePlus 8 and the 8 Pro.

With the growing popularity and demand, these OnePlus smartphones have breached the affordable line and now cost a premium. Not everyone buys a premium smartphone and OnePlus knows that.

This is where the OnePlus Nord enters — the new OnePlus mid-range smartphone which starts at Rs 24,999. OnePlus Nord is OnePlus’ new beginning which, according to the company, takes it back to its roots. Make no mistake, the Nord is not a flagship-killer but a smartphone that sticks to the company’s mantra of Fast, Smooth and affordable.

Our OnePlus Nord review unit is a 12GB + 256GB storage configuration that is paired with a Qualcomm Snapdragon 765G processor inside this gorgeous Blue Marble glass body. While the Snapdragon 765G may not be a flagship processor, it does get close when you try and push the smartphone to its maximum limit.

During our 7-day long OnePlus Nord review period, we used the smartphone extensively to play games like PUBG Mobile, Asphalt 8, and if it matters, also Stick Cricket and Subway Surfer, (because there is no harm in channeling some nostalgia, eh?).

There was not one time wherein we saw the smartphone give us any problems while playing any of the light or graphic-heavy games. PUBG, which is a popular choice among many smartphone gamers, is limited to HD graphics and high frame rate.

This could be a bummer or perhaps a deal-breaker for the ones who are into competitive gaming and want their smartphones to support HDR graphics and Ultra or Extreme frame rates. For the rest of you out there, we can say that the Nord does not break a sweat during intensive gaming. Everyday tasks, too, were a breeze on the Nord. Although our review unit packed 12 gigs of LPDD4x RAM, the 8GB mid-level variant or perhaps even the entry-level model with 6GB RAM should be sufficient, we believe.

You could credit the Android 10-based Oxygen OS 10.5 update on the Nord, which the company claims, offers several customisation options to offer a smooth and lag-free experience. To complement the smoothness, there is also a 90Hz refresh rate support on the Nord.

What this means is that while you are scrolling through your social media feed, or performing some tasks while looking at the 6.44-inch Fluid AMOLED Full HD+ display, the animations would look a lot smoother. The HDR10+ display, normally, hits a peak brightness of 500 nits and we did not have any issues while using the Nord in broad daylight. The colours are punchy and vibrant and you will appreciate the deep blacks while watching content.

When there’s a need, the display gets bright as high as 1000 nits while you are playing HDR content. However, the auto-brightness setting was too aggressive for our liking and it did push down the brightness levels to extreme low at times. This can definitely be fixed via a software update.

Oxygen OS is often said to be among the best Android skins out there, and we agree. However, the best of Android skins too gave some slight niggles here and there. Initially, we did notice that some apps crashed and only worked after the phone was restarted.

This was a one-time thing and the phone performed without any problems later. We also noticed that the camera app, sometimes, took a couple of seconds to activate the viewfinder. As we mentioned, such tiny issues can be bothersome but are easily fixable with a software update.

OnePlus promises that Nord will get two years of Android updates and three years of security patches at least.

While the 2+3 combination may attract enthusiasts, not many may hold a such an opinion about the average screen-on time (SoT).

The Nord packs a 4,115 mAh battery. On days of medium-to-light usage, the Nord did manage to give us six hours of screen-on time (SoT). However, play games like PUBG or shoot photos and videos, the SoT drops close to 5 hours.

This could also be due to the 90Hz refresh rate display setting which we had enabled throughout our review period. Drop down the refresh rate to 60Hz and you are likely to get an additional hour worth of SoT.

That’s not bad in any case but considering a relatively-small screen with some software optimisation, we expected the Nord to offer close to eight hours of SoT.

Thankfully, OnePlus decided to ship the Nord with a Warp 30T fast charger which took just over an hour, on an average, to charge the phone completely and helped us get back to our gaming sessions quickly. You could blame the way the Nord feels in-hand, and not just the processor, for our extra-long hours of gameplay and smartphone usage.

OnePlus Nord, despite weighing 184 grams, does not feel too heavy in hand. This could be due to the excellent weight distribution or the choice of a plastic frame over metal. And thanks to the slightly curved edges on the back, you get a good grip as well. We have already raised our fair share of appreciation for the choice of a Blue Marble colour in our OnePlus Nord first impressions. 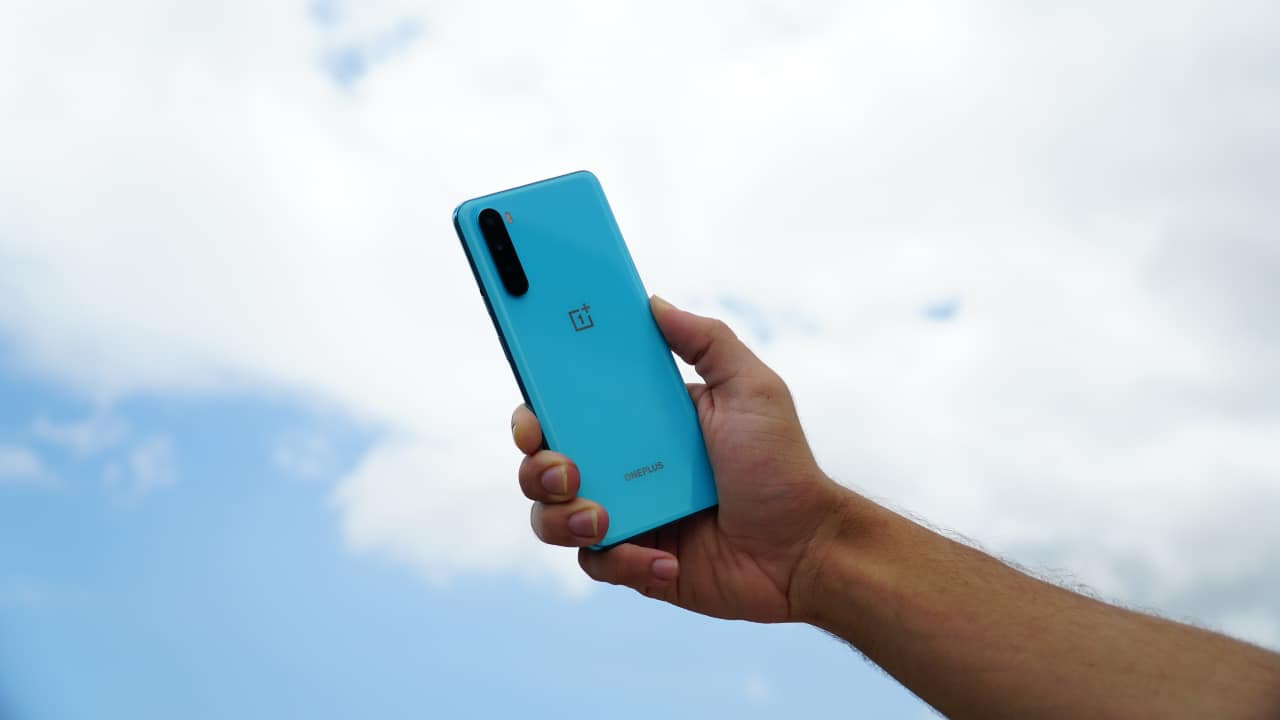 OnePlus has stolen the 48MP f/1.75 Sony IMX586 sensor from the OnePlus 8. While the hardware sensor is common, the imaging performance may not necessarily be the same. OnePlus Nord’s main camera shoots detailed shots when there is a good amount of light. The camera gets saturation and exposure too accurate most of the times. However, chances are that you will notice the inconsistent white-balance and a pinkish hue in some images.

Night Mode, aka Nightscape, also works fine when there is enough light. The camera bumps up the exposure and clicks multiple frames, with the end result being a better version over the normal mode with slightly-well exposed highlights and shadows. However, when there is absolutely no light, the camera software messes up with the exposure to get maximum detail but introduces a lot of noise, especially around the edges.

The other three cameras include an 8MP ultra-wide, a 2MP macro camera and a 5MP depth sensor. Good to see that OnePlus has finally managed to fix the difference in colour temperature between the wide and ultrawide camera. The 8MP ultrawide camera manages to click well-exposed and saturated shots but they aren’t as detailed as the primary lens. However, the edges are heavily-distorted, in our opinion.

The 2MP macro camera needs work. The software does try to compensate for the lack of detail by sharpening it but then that’s too evident. OnePlus could have stolen the OnePlus 7T’s ultrawide mechanism and repurposed it for a macro mode via software. You would have not only gotten a higher resolution close-up shot but perhaps could have saved some space there and adjusted some room for the missing 3.5-mm headphone jack. 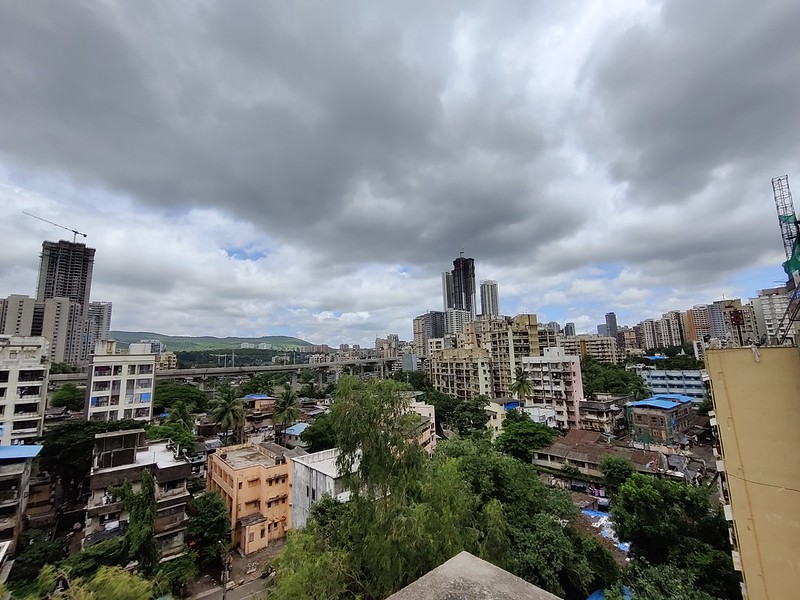 Portrait mode on the front and the rear camera is excellent when it comes to edge detection. The bokeh did not seem to be artificial either. While the 32MP primary front camera placed inside the dual punch-hole cut-out on the display did click detailed shots, the skin looked slightly smoothened out.

The front camera setup also includes an 8MP ultrawide camera which should do a decent job for those groupies that you click in well-lit conditions outside post the pandemic.

You may think that we are being very harsh on OnePlus but hey when the company makes a claim that reads, “If you don’t like the cameras, we have really messed up,” it does invite some factual criticism. By the way, the Nord’s front camera shoots videos in 4K 60fps, just in case.

To sum up our OnePlus Nord review, we would suggest that the Nord is definitely a smartphone you should consider buying if your budget is under Rs 30,000.

OnePlus Nord is not an average Joe of a smartphone. It aims at offering you an all-round user experience with its quality combination of hardware and software.

While performance is its forte, the Nord has an above-average camera unit. Another reason to buy OnePlus Nord is software support. Going by the company’s recent record, the promised two years of Android updates should be rolled out to users soon after they are released by Google.

A challenge for OnePlus Nord is a bunch of other smartphones like the Realme X2 Pro (Review) or the Redmi K20 Pro (Review) which are priced similarly.

These smartphones too feature a capable set of hardware but the most significant difference lies on the software-side. Realme tends to take time when it comes to making the latest OS available for its smartphones, whereas the Redmi K20 Pro is a year-old smartphone and chances are it may not get as many updates as the OnePlus Nord.

Sure, compromises were made here and there, but should these affect your purchase decision? We do not think so.

Considering all these factors, maybe you can settle with OnePlus Nord.