HP Spectre x360 (2021) Review: A productive workhorse that looks more like a Stallion

HP certainly hasn’t disappointed on the design front. The HP Spectre x360 (2021) follows the same design principles as its predecessor, with a brushed metal design, stylish edges, and an elegant Natural Silver finish. The 360-degree hinge on the laptop looks pretty solid and allows the screen to flip back completely, allowing for a tablet form factor. Additionally, the HP logo is engraved on the lid, while the Spectre branding is visible under the keyboard. This convertible notebook has an 11.75 x 8.67 x 0.67-inch footprint and weighs around 1.3kg, making it ideal for work on the go. When using a “Pro” laptop, the one thing that cannot be comprised is the keyboard and trackpad. And we’re glad to say that there are absolutely no comprises here. A professional laptop should be comfortable to use just about anywhere, and the HP Spectre’s full keyboard certainly makes that possible. The keyboard runs the entire length of the chassis, with just enough room on the edges so you don't accidentally hit a key. 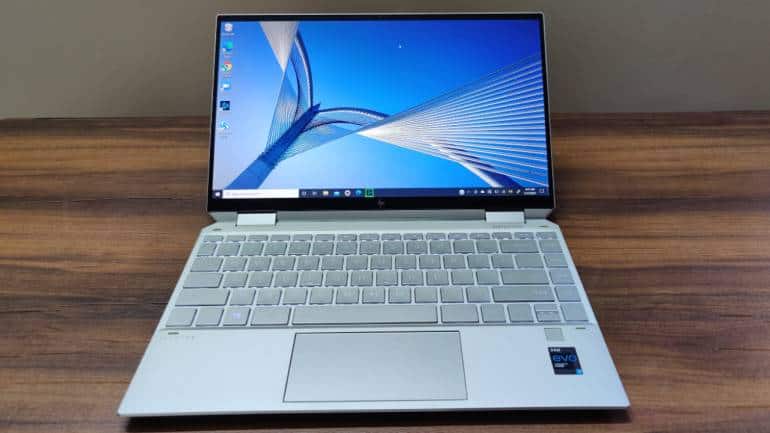 And speaking of the keys, they have a satisfying feel and decent travel for membrane keys, which is quite responsive. The keyboard is backlit, which is good if you are working in a dark room. The keyboard is quite comfortable to use on a desk as well as the lap. The trackpad was nice and responsive with Windows precession drivers. There was quite a bit of room to glide across the surface. The trackpad here was just about average, but my experience with the keyboard experience was excellent. The HP Spectre x360 (2021) has a decent number of ports for a thin and light notebook. The Spectre x360 features an audio jack and a USB 3.1 Type-A port on the left. Additionally, there’s a microSD card slot, a webcam kill switch, and a USB-C port (Thunderbolt 4) on the right side. The charging or second Thunderbolt 4 port is also located on the right but is further to the back. The one problem we faced was locating the power button, which is located on the left side at the rear. The new Spectre notebook also features a fingerprint reader on the palm rest as well as a face recognition webcam for Windows Hello.

The new HP Spectre x360 sports a 13.3-inch Full HD (1080p) IPS Multi-touch display. The screen is protected by Gorilla Glass and has an advertised brightness of 400 nits with 100 percent sRGB coverage. The display is well lit and colours are represented quite accurately. Contrast and viewing angles were good as well. You also have the option to use the notebook in tablet mode or tent mode. The transition between modes was quite seamless, so you can switch between modes and continue with your work without any hurdles. The bottom-firing speakers are powered by Bang & Olufsen, outputting decent audio, which is pretty loud and bass-heavy, although this comes at the cost of clarity. The Bang & Olufsen software features an equalizer and presets, but those don’t do much in terms of improving overall clarity. I mostly relied on external speakers, but if you find yourself in a jam, the audio on the new Spectre is pretty decent.

The HP Spectre x360 is powered by an Intel Core i7-1165G7 with a base clock speed of 2.8GHz (4.7GHz turbo). The CPU is paired with 16GB of RAM and 512GB of PCIe SSD storage. With the new 11th Gen Intel CPU comes integrated Iris Xe graphics, which offers quite the generational leap in performance. In terms of productivity, the Intel CPU in the Spectre does an excellent job of handling everyday tasks with little-to-no effort. Multi-tasking was smooth whether it was editing presentation in PowerPoint while browsing the net or using MS Word and Excel simultaneously. When it comes to productivity workloads, the quad-core Intel CPU is quite effective.

Professional notebooks are hardly ever meant for gaming, but Intel’s new Iris Xe Graphics can handle an hour or two of casual gaming. Games like Overwatch, Counter Strike: Global Offensive, and Heroes of the Storm ran smoothly. It is worth noting that I only tested these games for an hour, while graphics were set to low. However, the gains of Intel’s new integrated graphics are evident here.

You can use the software to switch between balanced, performance, and quiet cooling profiles. The two fans got a little noisy while stressing out the notebook (While Gaming and running the Cinebench throttling test). And while the bottom of the notebook got pretty toasty, not a lot of that heat leaked into the keyboard area, although I wouldn’t recommend video editing on this machine. The new HP Spectre x360 notebook also features Intel’s Evo branding, which meant that the laptop has to meet certain criteria. Overall, the HP Spectre x360 performed better than expected, mostly in part due to the gains from the new 11th Gen Intel CPU. I raised my expectations for battery life as soon as I saw the Spectre x360 was Intel Evo certified. And I’m pleased to say that the HP Spectre x360 (2021) didn’t disappoint, delivering over 11 hours of battery life in a video loop test. The notebook could do a full workday on a single charge without much effort, which is a little under 10 hours on MS Word and Google Chrome. Brightness and resolution were set to 50 percent and 1080p, respectively while working. The Spectre is powered through the USB-C port.

The HP Spectre x360 (2021) has all the bells and whistles of a premium notebook. Sure, it doesn’t come cheap, but in terms of premium notebooks, it isn’t really far off from the competition (Dell XPS 13 and Asus ZenBook Flip S) either. The Spectre x360 (2021) is certainly one of the best-looking 13-inch laptops I’ve seen, and the top-notch build doesn’t hurt. The display is bright and vibrant, while the 2-in-1 form factor certainly offers a ton of utility. 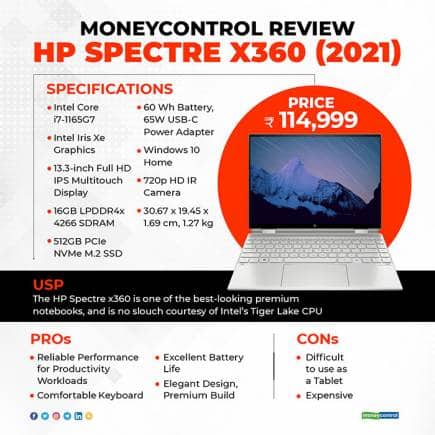 The keyboard was quite comfortable and battery life was nothing short of excellent. And let’s not forget performance, which is arguably the biggest gain on the new Spectre x360, courtesy of that new Tiger Lake CPU. Although one can’t help but wonder how the new AMD chips would perform, i.e. if they make it to ultra-premium notebooks. But for now, I was quite pleased with Intel here. The Spectre x360 (2021) may not be the ideal laptop for power users, but it is nothing short of a productive workhorse. If you are looking for an ultra-premium notebook, then the HP Spectre x360 (2021) is definitely worth considering.