Of course, you have the rivals like the Jawa, Benelli Imperiale 400 and the new Honda H’ness CB350, but these bikes rival the Classic 350 more closely.

When Royal Enfield started doing well in the Indian market, it sold mainly on the sentiment that the bike had around it. Now, finally, Royal Enfield has given us a proper upgrade.

Bordering on retro, but not really there, a new engine and a much better chassis along with some modern tech are some of the best features from the Meteor 350. But why, though?

The Classic 350 and the Bullet 350 had a huge name in Indian markets and it seemed only right to bank your entire strategy on that alone. However, as time went on and technology improved, the motorcycles themselves remained, more or less, the same. Sure, discs replaced drums and spark plugs were added, but it didn’t change the fact that Royal Enfield was still selling bikes from the 50s.

Luckily for them, this didn’t change their image in the eyes of the public and the bikes continued to do well. Then Royal Enfield brought us the Himalayan, a radically different bike from what they were selling before.

And while it was the same old thumping engine as all the Enfields before it, it did get a different chassis and performed rather differently. More specifically better adventuring. Next came the 650 twins. Safe to say Royal Enfield was finally beginning to see sense in bringing better bikes. The whole, ‘if it ain’t broke’ deal just wasn’t enough. The 650s brought in an all-new engine and given the bikes are still plain retro, it was another step up. The new bikes added power, torque and a new premium-ness that was missing.

I’m going to get right to the upgrades for this one. The Meteor 350 gets a new engine. Yes, it is the same 346cc single and it still makes about the same 20.4 PS and 27 Nm, but it is so much better than that.

It does away with the old pushrod system in favour of SOHC. There are balancer shafts for lower vibrations and an oil circuit for the two-valve head for cooling.

The old double cradle frame too has been swapped out for a double-downtube frame used in most of the retro cruisers. The wheels are the still the same 19/17-inch set and suspension comes from conventional forks and twin rear shock absorbers.' 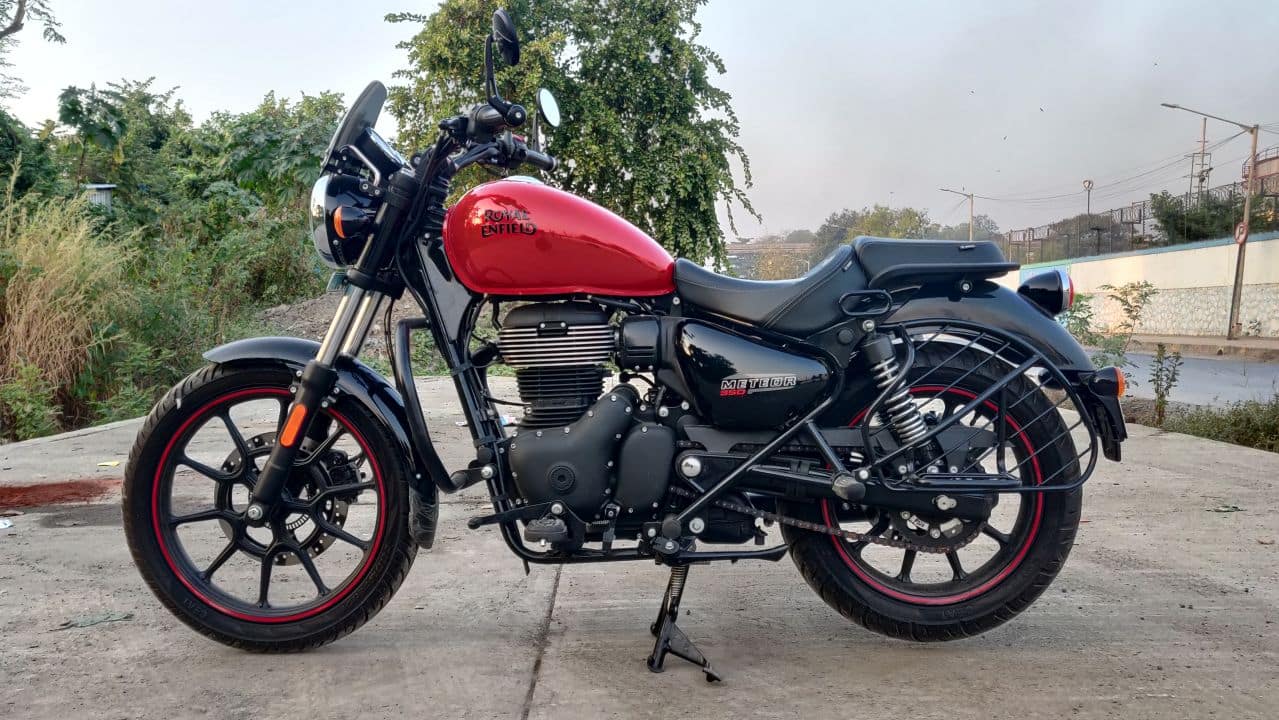 Now all of this may seem like nominal changes and yes, they are. But the feel in Meteor is world’s away from what you would normally associate with Royal Enfield. The first thing you notice when you thumb the Meteor’s old starter knob, is a new sounding engine. There still is a little bit of thump, but to my ears (and possibly the dismay of many), it is not the old ‘knock’.

I, personally, like this a lot more. It makes the engine sound more refined than the old school engines. The other thing you realise is that the vibrations are significantly lower and unlike the Classic 350, this reduces even more when you’re riding around in the mid-range of revolutions.

Now the Meteor is essentially a replacement for the Thunderbird 350 and while it does take most of its styling cues from there, the bike has a slightly higher ground clearance and a lower seat height. So it is, in some ways, more compact, yet you can’t see it. Even when you start riding, the Meteor feels like a big bike, which it is. There is a weight to it that is apparent when you’re standing still or lugging it around on foot, but manoeuvring through traffic, even at slow speeds, the Meteor is perfectly balanced.

Speaking of riding, hitting corners at higher speeds too doesn’t seem to phase the bike. The Meteor seems planted and that is probably more possible because of the lack of vibrations. It does require you to push harder on the handlebars, but that comes with the territory when riding a cruiser.

Now for the looks

When I first said the Meteor borders on retro, I meant it in a way where it’s only a called a retro because it’s a Royal Enfield. In fact, most modern-day cruisers will still have the same stance as the Meteor. In fact it looks more in line with the times than the rest of the company’s fleet. What they did add to however is retro looking switchgear. These take the shape of knobs that you turn for both the engine cut-off/start switch as well as the high/low-beam and pass-light switch. 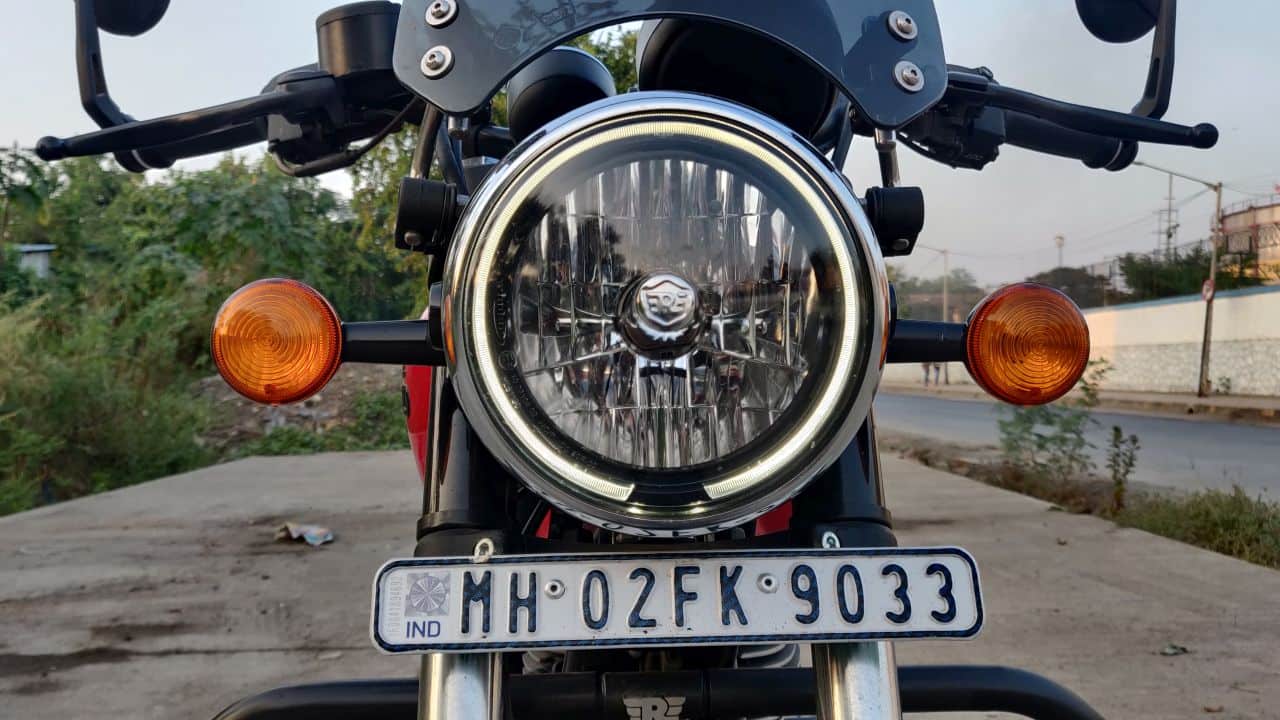 The bike flows very beautifully from the headlamp to the tail section. And the company definitely seems to be taking advantage of the higher standards set in for the 650 twins because the build quality feels top-class.

Like I said before, this is a replacement for the erstwhile Thunderbird 350 and as such the silhouette still remains the same. There are changes however like the new headlamp, wider and lower handlebars and a new tail lamp as well.

Then there is new twin-pod instrument cluster. It really is just a single pod which gives you all the information you need except for the rev count. The other smaller pod is the company’s Tripper navigation system. You connect to the bike via the Royal Enfield app get turn-by-turn navigation on it.

I used it for a short while and it worked fairly well. When not connected to your phone, it shows the time which is present on the digital insert on the other pod as well, but the bigger font is easier to read. 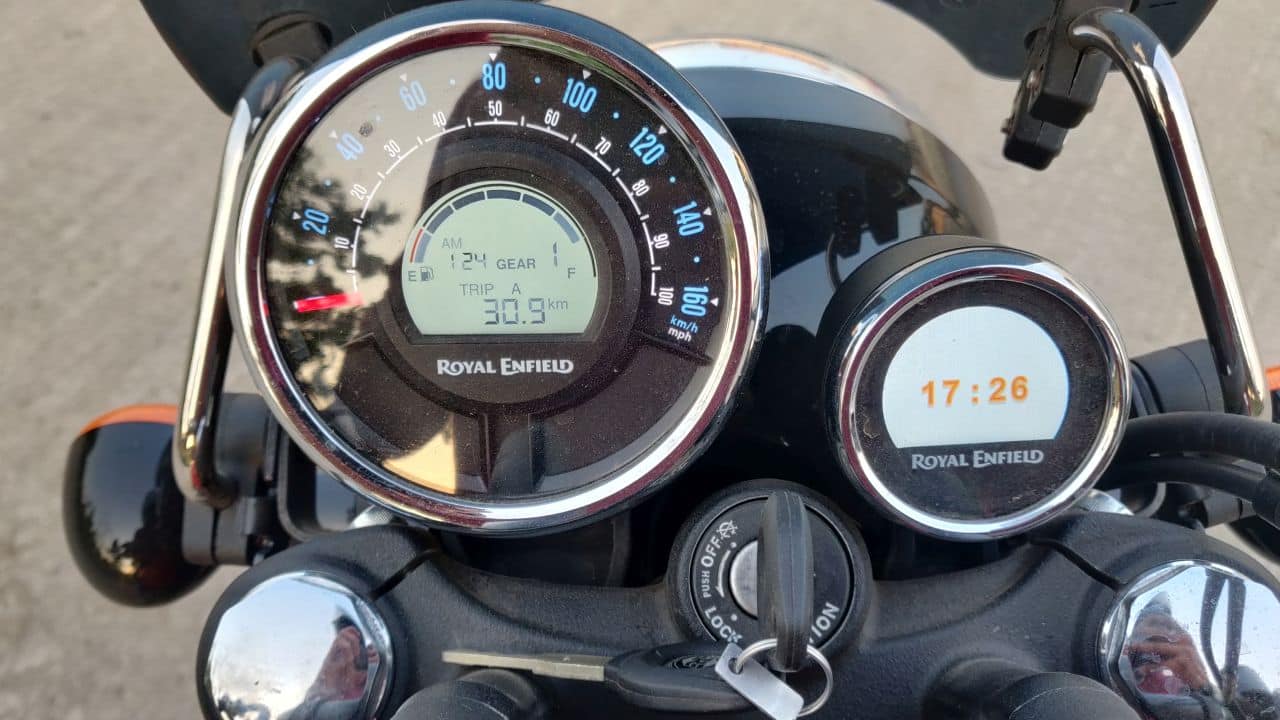 My review bike was the stellar variant, the first in the lineup and apart for cosmetic differences in the three variants, nothing changes. I also had a few manufacturer accessories added to it. I’m sure you know that Royal Enfield has its Make it Yours programme to customise the bike and the accessories I received was from there.

This included bar-end mirrors, the touring seat, footpegs and a very stylish looking flyscreen. The seat was phenomenal. It is a little stiff, but on long rides, your bum won’t feel it. The mirrors, like most bar-end mirrors were a little small for my liking. The footpegs were a little bit of a mixed bag for me. It is wide and flat so it is comfortable, but because of how wide it is, I had some difficulty changing gears with shoes on (the other options is slippers or sandals and I had to try it). Personally, I would opt out of that unless I know I’m going to be spending a lot of time on long open highways. Or maybe buy a set and bolt it on whenever I decide to spend my time on a long open highway.

Without a doubt, the Meteor 350 is my favourite Royal Enfield. It is an easy recommend for anyone out in the market looking for a cruiser in that segment. Of course, you have the rivals like the Jawa, Benelli Imperiale 400 and the new Honda H’ness CB350, but these bikes rival the Classic 350 more closely. The Meteor 350 on the other hand has it’s own comfort and dynamics that is fairly unique in this engine class.
Stanford Masters
Tags: #Auto #review #Royal Enfield #Royal Enfield Meteor 350 #Technology
first published: Nov 29, 2020 02:03 pm