Despite its compact package, the Asus 8z does a lot of things right and very little wrong, making this offering simple yet effective.

The Asus 8z or Zenfone 8, as it is referred to internationally, was recently unveiled in India. However, the phone is by no means a new handset. The Asus 8z was released globally as the Zenfone 8 back in the first half of 2021. The Asus 8z fetches a starting price of Rs 42,999, making it the only compact Android smartphone in the segment. But despite the small form factor, the 8z makes little concessions.

It is equipped with a Snapdragon 888 chip, a 120Hz AMOLED panel, a sizeable 4,000 mAh battery, and a dual-camera setup on the back. And despite the Snapdragon 888 chip being well over a year old, it is still adopted by newer phones with a sub-45K price tag. The OnePlus 9RT (Review), Xiaomi 11T Pro (Review), and iQOO 9, all have adopted the Snapdragon 888 or 888+ chip, despite being 2022 launches. But does a compact phone have what it takes to usurp tried and tested flagship killers? Stick around and let’s find out.

The Asus 8z boasts a compact form factor, one that is even smaller than that of the Galaxy S22 (Review). The phone opts for a Gorilla Glass Victus on the front and Gorilla Glass 3 on the back. Additionally, the matte finish, makes it resistant to fingerprints. The 8z also boasts a metal frame that gives it a more premium aesthetic. You also see a rather small camera layout on the back with only two cameras and a hole-punch cutout for the selfie camera on the front. The cameras on the back protrude slightly, which allows the phone to sit flat on a surface without any wobble. The handset is offered in Obsidian Black and Horizon Silver, while the power button on the left is painted blue. The volume buttons are also located on the left, while this flagship is equipped with the odd headphone jack on the top. On the bottom, there’s a USB Type-C port, a speaker, the SIM tray, and an LED notification light. 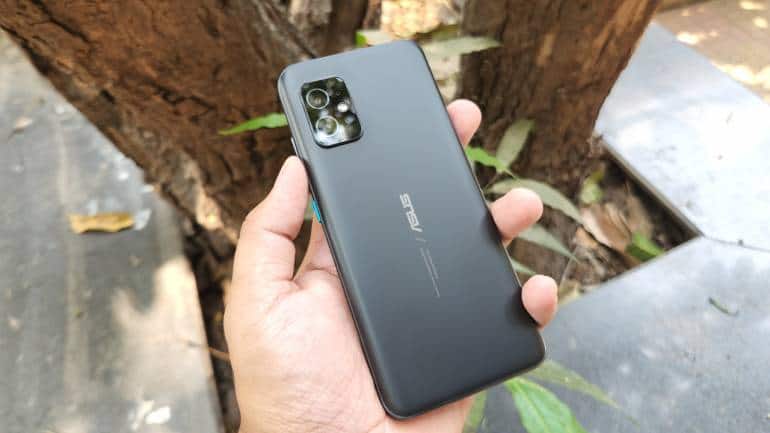 So apart from the usual traits, the Asus 8z also comes with a nifty notification LED, a headphone jack, and an IP68 rating for dust and water resistance. The IP68 rating does come as a surprise as most of the competition misses out on it. There’s no doubt that the build quality here is top-notch, while Asus get top marks for design as the phone has a premium look to it, but also feels comfortable and convenient to use with one hand. However, I did prefer the sharper edges of the Galaxy S22 as opposed to the rounded edges on the Asus 8z.

The Asus 8z has one of the smallest displays on an Android smartphone. And while some users may prefer a larger display, I can assure you that there’s little compromise in the quality of the screen. Asus has opted for a 5.9-inch AMOLED display with an FHD+ (1080 x 2400 pixels) resolution. Furthermore, the screen has a 120Hz refresh rate and a 240Hz touch sampling rate, making it perfect for gaming. The display gets pretty bright and is easily visible under direct sunlight courtesy of the 1,100 nits of peak brightness. 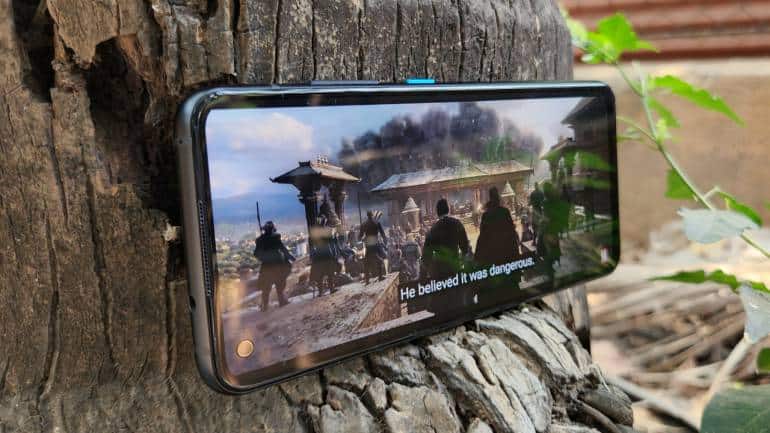 Additionally, you also get HDR10+ support for consuming content on supported OTT platforms like Netflix. The Asus 8z has good viewing angles and the bezels are relatively slim, ensuring maximum screen real estate despite the smaller size. There’s nothing you can do about the screen’s size as this is a compact phone, but there are few other comprises here, allowing the display here to easily keep pace with the competition.

There’s no doubt that the Asus 8z has a good display, but things get much better when you get to the audio. The stereo speakers here get pretty loud, outputting sound that can easily rival some of the best flagships. The amp powering the speakers is tuned by Dirac and pumps out powerful yet balanced sound with an immersive soundstage. However, the cherry on top here is that the Asus 8z features a headphone jack with Qualcomm Aqstic DAC and Dirac HD Sound, so if you are an audiophile and have a good pair of wired headphones to work with, then you won’t be disappointed by the sound. Additionally, there’s a built-in EQ that offers more flexibility when tuning your earphone’s frequency response.

For performance, the Asus 8z features a Snapdragon 888 SoC paired with the Adreno 660 graphics. The phone also comes with 8GB of LPDDR5 RAM and 128GB of UFS 3.1 storage. While the Asus 8z is running last year’s Snapdragon flagship chip, it isn’t uncommon for 2022 smartphones to use the chip at this price. That being said, the Snapdragon 888 SoC can easily handle multitasking and gaming without a hitch. 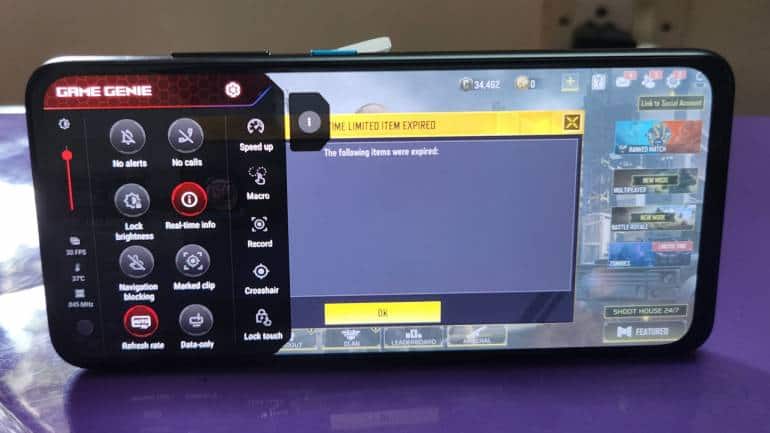 Call of Duty: Mobile, Asphalt 9: Legends, Battleground Mobile India (BGMI), and Raid: Shadow Legends worked with frame rates and graphics set to the max. The phone ran quite hot 20 minutes into gaming and Call of Duty: Mobile running for 30 minutes straight drained around 15 percent of the battery. In Geekbench, the chip managed a single-core score of 1101 points and a multi-core score of 3511 points. Overall, the Asus 8z performs well under pressure and can handle just about any task effortlessly.

For optics, the Asus 8z gets a dual-camera setup with a 64 MP Sony IMX686 primary sensor and a 12 MP Sony IMX363 ultrawide shooter. On the front, the 8z has a 12MP Sony IMX633 sensor for selfies. The Asus 8z can record 4K video at 60fps with the main camera and can kick it up to 8K at 30fps. So, let’s take an in-depth look at camera performance. So, how do these cameras perform in real-world scenarios, let’s find out? The main camera on the back produces 16 MP shots with good detail and vibrant colours in daylight. Photos also don’t look overprocessed or over-sharpened, but there are times when overexposure was a problem, although this only occurred in photos taken under complex lighting scenarios. But it wasn’t just overexposure, in more complex lighting, images did tend to look software with less detail. During the day, the dynamic range was always on point, while the sensor dealt well with shadows. The ultrawide camera on the 8z maintains good colour consistency but lacks the same level of detail and sharpness as the main camera.

Photos taken on the ultrawide also appear softer than those taken on the primary 64 MP sensor. The sensor here is smaller and the difference in quality is evident. Since there’s no optical zoom, the reach of the digital zoom on the Asus 8z is quite limited. In low light, Night mode kicks in, bumping up the exposure time to add more detail and remove noise from shots. I think the 8z’s main sensor did surprisingly well while capturing stills in low light, although you will have to hold the phone steady for a few seconds. Additionally, the ultrawide also doubles as a macro camera. 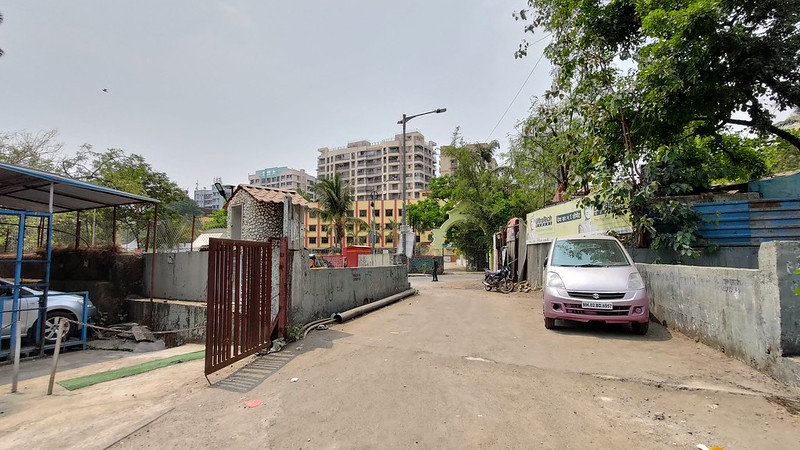 Moving on to the front, the 12 MP selfie camera is better than most in this price range. In bright light, detail, colours, and sharpness are handled quite well, while maintaining good background blur and subject separation for portraits. However, skin tones here tend to look less natural and more saturated. Lastly, the Asus 8z can capture video at up to 8K resolution at 30fps. And while I was impressed with detail and colours, the dynamic range wasn’t always on point. I would recommend sticking to 4K video at 60fps. The ultrawide camera can also record 4K video, but at 30fps. The video recording also feels stables thanks to the OIS on the main camera. There’s no doubt that the cameras on the Asus 8z are quite formidable for the price and can compete with just about any 2022 smartphone under Rs 50,000. However, there are a few drawbacks, like the average ultrawide shooter, the evident difficulties in complex lighting, and the lack of optical zoom. If I could sum it up in one sentence, the camera setup on the Asus 8z is good, not great, as you’d expect with phones at this price or flagship killers.

Despite its small form factor, the Asus 8z packs a sizeable 4,000 mAh battery that supports 30W fast charging with a brick included in the box. I think Asus has done a pretty good job fitting a 4,000 mAh in such a small chassis. The battery can deliver a full day charge for the average user, although a heavy user may run out of juice towards the end of the day. However, the 30W charger included in the box can deliver a full charge in a little over an hour, so even if the battery is drained up, it shouldn’t take long to get it back up to speed.

When it comes to software, the Asus 8z is running Android 12 with the company’s Zen UI skin on top. The overall interface closely resembles stock Android and is relatively clean. One of the best parts of Android 12 is that it informs you when the camera and microphone are being used. You also get a Game Genie that allows you to tweak the phone’s performance, record games, block calls, and more, without having to minimize the game. However, the one thing that puts the Game Genie ahead of the competition from other OEMs is that it can be used to record macros in games. This was particularly useful in games like Raid: Shadow Legends, where it worked perfectly in place of an auto-clicker. The gives the Asus 8z a leg up in gaming against the competition. Asus has committed to two years of software updates, which is quite less considering the phone was released with Android 11.

While the trend of flagship killers and flagship phones, in general, have been shifting towards ‘bigger the better', the Asus 8z tones down the size. But nevertheless, maintains all the great aspects of a flagship in a small form factor. The phone offers powerful performance, a reliable camera setup, a premium build, game-changing audio quality, clean software, and a vibrant display. What’s more is that it also offers an IP68 rating, something not seen on competing devices like the OnePlus 9RT, Xiaomi 11T Pro, and iQOO 9. Additionally, the compact design is something you don’t necessarily find on Android phones at this price, which is a welcome change. There are a few drawbacks like the bang-on average battery, poor software support, and a lacklustre ultrawide camera. But there’s no doubt here that the Pros outweighs the Cons here. There’s no doubt that the Asus 8z stands out in the crowd in this competitive value flagship market, but outside the Android competition, the iPhone 12, which is often discounted, and the upcoming iPhone SE (2022) should give the 8z a good run for its money. However, I can’t help but give Asus credit here for making a very good compact smartphone, somewhat of a compact flagship killer, which earns the Asus 8z an easy recommendation.