Is this the new flagship killer of 2022? After using the device for nearly a week’s time, here is our Xiaomi 11T Pro review.

Xiaomi has been a household brand in India with over 25 percent market share for several quarters. The company has been selling budget and mid-range smartphones, until 2021 when it entered the premium space with full force. Xiaomi has launched many devices in the premium segment as consumers look to buy the best affordable flagship smartphones. The affordable flagship smartphone category, often known as the flagship killer segment, was once ruled by OnePlus. However, with the OnePlus 9 price in India starting at about Rs 50,000, Xiaomi looks to fill the void with its new Xiaomi 11T Pro.

The USP of the Xiaomi 11T Pro is its hyper-performance unit. The smartphone under Rs 40,000 comes with a Snapdragon flagship-grade chipset and a fast-charging tech in India. While the device is a well-rounded phone, it does have a few shortcomings compared to the OnePlus 9RT. So, without much ado, let’s begin our Xiaomi 11T Pro review with the performance unit.

The Xiaomi 11T Pro features a Snapdragon 888 SoC under the hood, which was last year’s flagship chipset. Despite being a year old, the chipset is powerful enough to handle any task that you throw at it. I played a bunch of games like Asphalt 9, Battlegrounds Mobile India (BGMI) and PUBG: New State on the smartphone. With a 120Hz refresh rate support, I would have liked BGMI with 90Hz refresh rate support and as of now, users will have to be content with Extreme (60fps) Frame Rate up to HDR graphics. None of the games lagged and I thoroughly enjoyed playing these mobile gaming titles on the Xiaomi 11T Pro. The device does get slightly warm to the touch. However, it is not as bad as the initial lot of Snapdragon 888-powered smartphones that were plagued with heating issues. 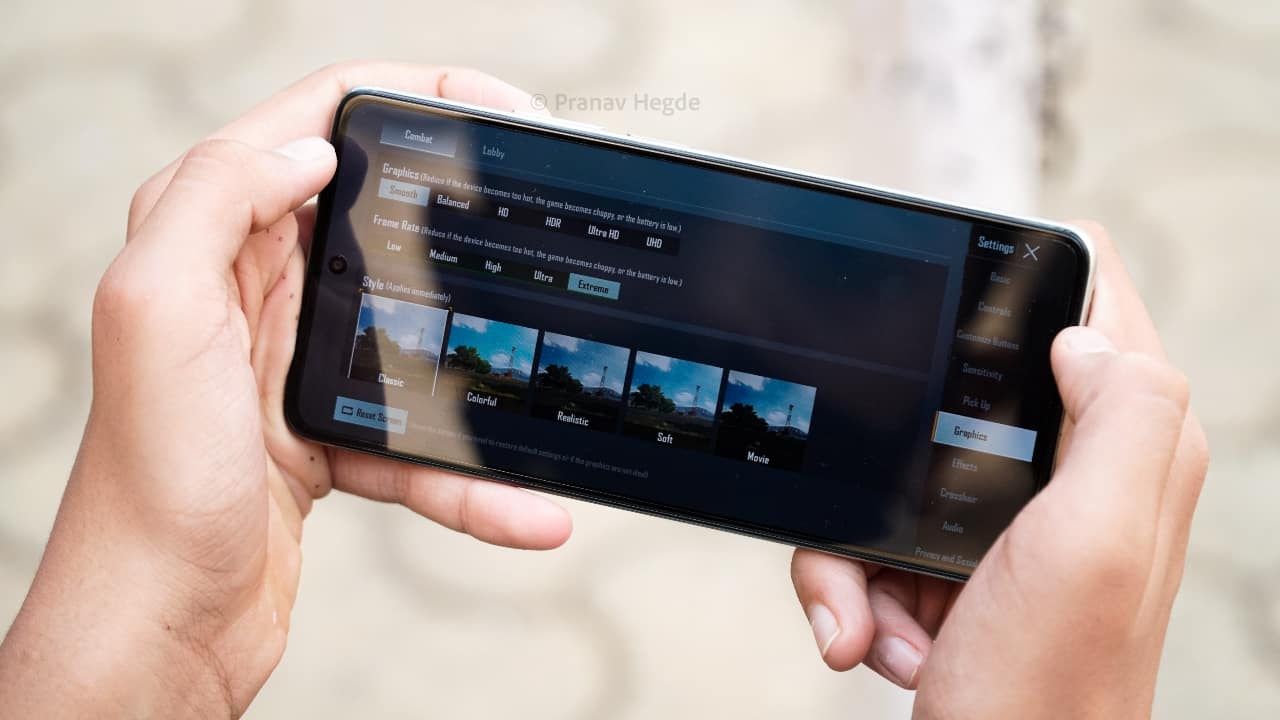 The haptics on this device is also responsive, which adds to the gaming experience. Another thing worth appreciating is the speakers. The Xiaomi 11T Pro has a stereo speaker setup with cutouts on either side to offer a surround sound-like experience. The quality is so good that I could hear the footsteps coming from a distance while playing BGMI.

RAM management on my unit with 12GB of RAM is also quite excellent. None of the apps restarted after I went back to one, even after recording videos, which otherwise kills many apps in the background. While we are at it, the Xiaomi 11T Pro runs Android 11-based MIUI 12.5 out of the box. In case you are concerned, no, there are no ads. The MIUI 12.5 update does come with minimal bloatware though, which can be uninstalled. I do find it annoying when certain system apps spam with notifications. However, a single tap on the toggle in the Notifications settings improves the user experience. 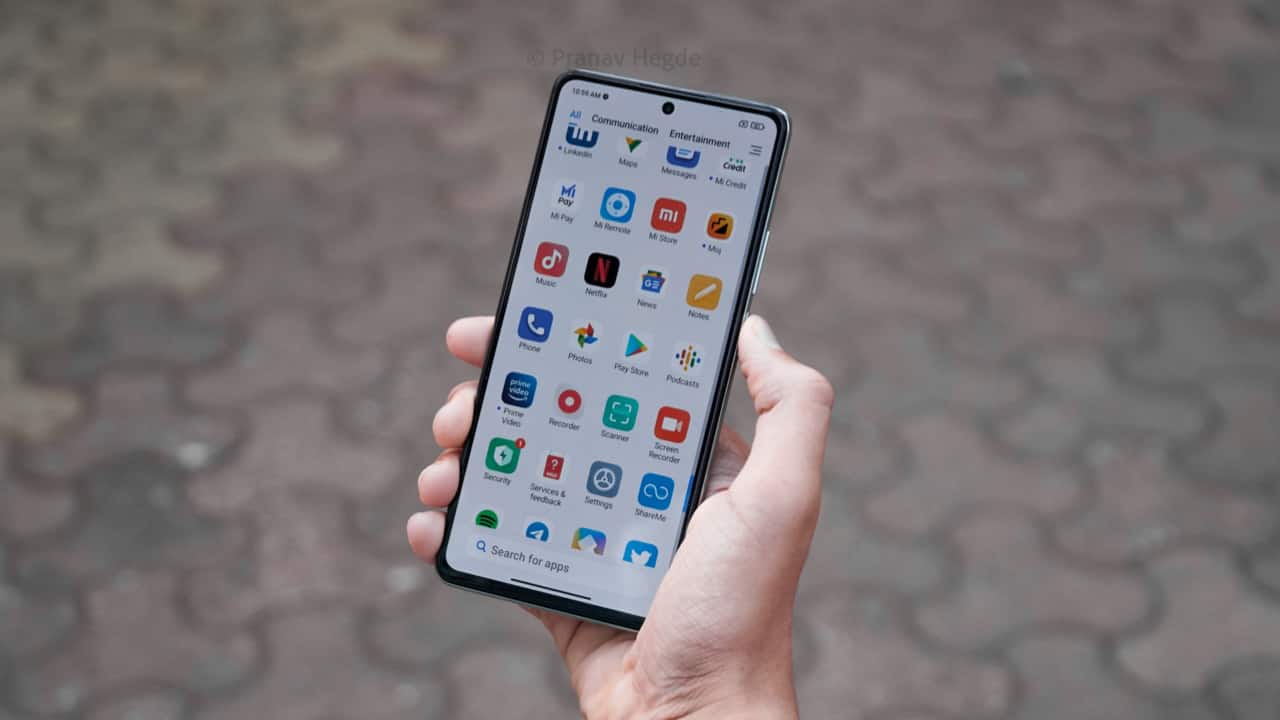 MIUI 12.5 is claimed to improve the system performance at the core and it seems to be doing fine, at least in my experience. Other than improving efficiency, the custom Android skin also includes features like Super Wallpapers, floating windows, etc. While these features make MIUI feature-rich, having the latest Android 12 update out of the box would have been nice. Xiaomi has promised three years of software updates and four years of security support on the Xiaomi 11T Pro. Therefore, the device is confirmed to get the Android 12 update with MIUI 13 soon.

Starting with the battery life, the Xiaomi 11T Pro packs a 5000 mAh battery. With a battery that big, one can expect an all-day battery life. With my use case, I got about 6.5 hours of screen-on time on average. Other than gaming, the phone was my primary device to consume YouTube videos, social media scrolling and attending video calls. The battery life will be better for those who do not play as many games on their phones. Adding to the charging experience is the 120W fast charging support. Xiaomi claims that the device charges from zero to 100 percent in 17 minutes. That is a tall claim for a 5000 mAh battery. During my Xiaomi 11T Pro review period, I drained the battery six times to check the claim. To my disappointment, the 11T Pro took around 30 minutes to charge every time.

After reaching out to the brand, I was told that the 17-minutes claim was announced after a series of lab tests that were conducted by the company. These tests were done in a controlled environment with certain parameters like Airplane mode enabled, location services being turned off, etc. The ambient temperature also needs to be below 25 degrees to completely charge the phone in under 17 minutes. While my Xiaomi 11T Pro review unit did not charge within 17 minutes, I am okay with the device’s battery being refilled in 30 minutes.

For a smartphone under Rs 40,000, the Xiaomi 11T Pro has a great in-hand feel with its glass back. The rear panel curves along the edges, which aids in offering better grip. The frame, which houses the side-mounted fingerprint scanner, is made of plastic and might bother some folks. Xiaomi said it was a trade-off to not increase the device’s weight by more than 204 grams. 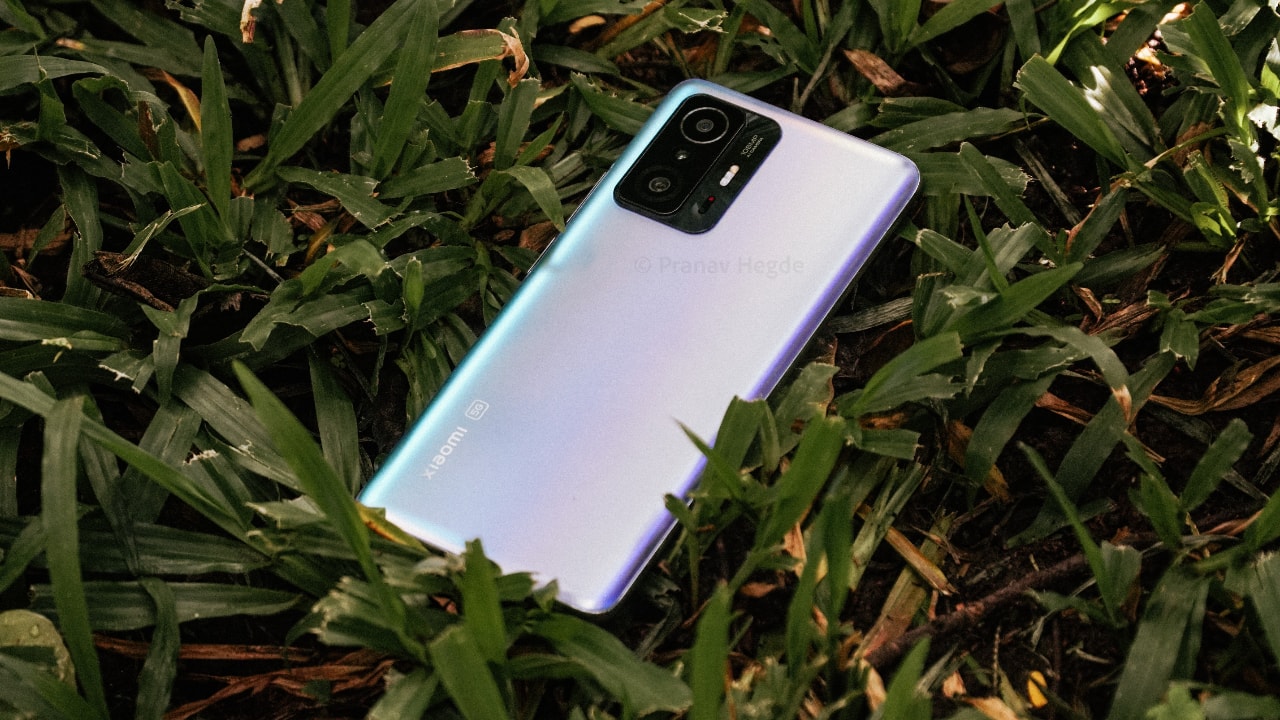 The device comes in three different colourways. Our Xiaomi 11T Pro review unit came in this Celestial Magic colour, which throws different shades of Blue, Orange, Purple and more when you look at it from different angles. The rear panel has a shiny yet frosted finish that hides the fingerprint smudges. I personally am not a fan of this colour and would pick the Moonlight White instead. It not only has a matte finish but also hides fingerprint smudges while looking a lot more classy. Those who want a glossy back can opt for the Meteorite Black colour option. 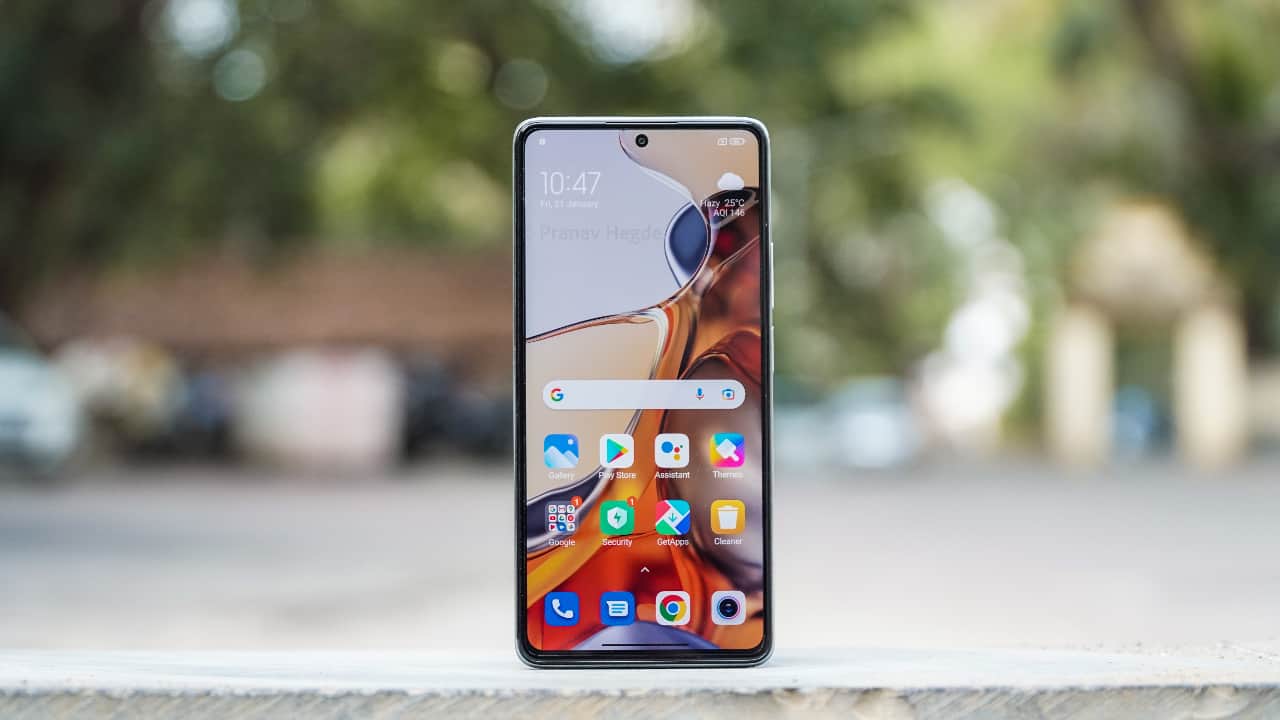 At the front, there is a 6.67-inch AMOLED display with a Full HD+ resolution. The display is bright at 1000 nits, which means you should not experience any issues while viewing content indoors or outdoors. Our review unit though had this unusual issue wherein the panel would get slightly dim even while the display brightness bar stayed at max. Minus that, our experience on this device was quite good.

The screen is flat and comes with fairly thin bezels. You get good viewing angles and the colours are vibrant too. Xiaomi has used a 10-bit AMOLED panel on this one, which offers up to a billion colours. The device also comes with Dolby Atmos and Dolby vision support that offer an excellent multimedia experience while watching shows on Netflix or Prime Video. There is also support for a 120Hz refresh rate for those who want a smoother scrolling experience.

On the back, the phone has a rectangular camera module that houses the triple-camera setup. While we are at it, let’s get some of the Xiaomi 11T Pro camera samples. The Xiaomi 11T Pro comes with a triple-camera setup on the back. There is a 108MP Samsung ISOCELL HM2 sensor, which is also found on the Redmi Note 10 Pro Max (Review), Xiaomi 11i HyperCharge (Review) and even on the Mi 10i (Review). When asked why Xiaomi used the same sensor and did not upgrade the 108MP sensor on the 11T Pro, the company told us that the sensor has been well optimised to process the best output. The claim sticks true and we were indeed quite impressed with the main camera’s performance. The ISP of the Snapdragon 888 also plays a key role here in capturing better colours and details.

The main 108MP sensor churns out well-detailed images. Unlike the Xiaomi 11i HyperCharge, the Xiaomi 11T Pro’s main camera does not oversharpen the images to get more details. There are instances when the software oversaturated the blue tones a bit but overall, the results are impressive. The same can be said for lowlight performance as well. There is little-to-no noise in the camera samples we clicked. The images also have a good amount of detail. The shadows are well exposed without overblowing the highlights.

There is also an 8MP ultrawide camera that offers a wider frame and gets close when it comes to matching the colours of the main camera. Obviously, there is distortion around the edges and the details are not as good comparatively. The third camera is a 5MP tele-macro camera which we saw in the Redmi Note 10 Pro Max. It is the best macro camera implementation that we have seen so far across the industry. The super macro mode offers excellent depth while focusing quickly on the subject. The Xiaomi 11T Pro does set a benchmark with its macro camera in the premium segment. All is not well though. The 16MP front camera is decent with details but messes up with the skin tones. There is also no optical image stabilisation (OIS) support for the main camera either. For the price you pay, it would have been great to see this one get OIS. Xiaomi tells us that it uses software tricks like clicking multiple shots in different exposures and then processes the best output within seconds as an alternative. Click here or on the Flickr slideshow below to check some of the camera samples we shot for our Xiaomi 11T Pro review. 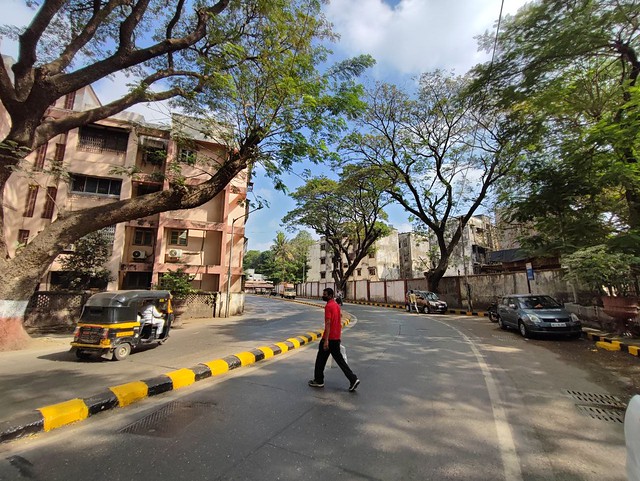 With the specs on offer, the Xiaomi 11T Pro offers great value for your money. A 10-bit AMOLED display with Dolby Vision, combined with Harmon Kardon-tuned dual speakers offer an excellent multimedia experience. The haptics and speakers are also among the best we have tested so far in the segment. We can say the same for the rear camera performance as well. That being said, the lack of OIS is a bummer. Xiaomi’s arch-rival in the segment, the OnePlus 9RT does come with OIS support for the main camera but is priced higher at Rs 42,999 for the base model. Goes without saying, if OIS is what you cannot compromise on, go for the OnePlus 9RT (review coming soon). There is also a plastic frame on the 11T Pro, whereas the OnePlus 9RT has a  metal chassis. 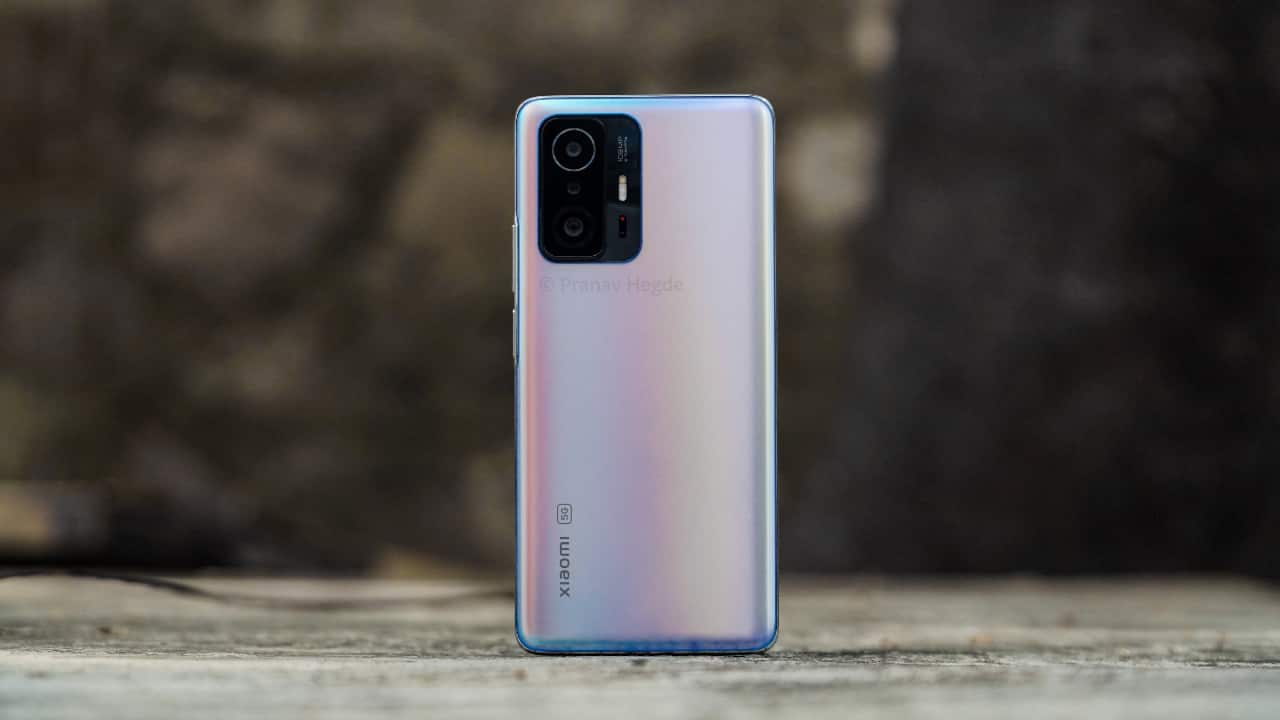 Both phones have the same Snapdragon 888 SoC, which means that you do not have to worry about performance. The 120W fast charging claim did not match our timing but charging the 5000 mAh battery in around 30 minutes is still among the fastest in the segment.

All in all, the Xiaomi 11T Pro ticks almost all boxes for a well-rounded premium smartphone experience - something that OnePlus once offered in the under-Rs 40,000 price category. Does this mean that the Xiaomi 11T Pro is the latest flagship killer of 2022? We would like to say so. But the competition is about to get tougher with the upcoming iQOO 9, which also packs some promising hardware.