One of the most impressive phones under Rs 25,000.

Xiaomi launched the Mi 10i early in January as the first mid-range smartphone in the company's portfolio in India. Following in the footstep of previous Mi 10 devices, the handset arrived with a 5G chipset, 108 MP camera, high-refresh-rate display, and sizeable battery. The Chinese smartphone maker set the Mi 10i's price in India at Rs 20,999 for the base variant, while the two other models cost Rs 21,999 and Rs 23,999. In terms of hardware, the Mi 10i looks like the complete package, but just how does it fare in terms of real-world performance; well, let's find out.

In terms of design, the Xiaomi Mi 10i looks more or less like the Redmi Note 9 Pro 5G, which launched in China back in December. While the front and back of the Mi 10i are both protected by Gorilla Glass 5, the frame of the phone is made from plastic as opposed to the aluminium frame on the Mi 10T Pro. The phone weighs 215 grams, but it doesn't take long to get used to the heft. The rear panel has an attractive frosty glass finish that stands up well to fingerprints. The phone is available in Atlantic Blue, Midnight Black, and Pacific Sunrise colour options, ours came in the last of the three. The back panel also has an IP53 rating for splash resistance. The dual stereo speakers sound good for the most part. The Mi 10i opts for a circular camera module on the back, which is protected by another piece of glass. There's a nice transparent silicone case included in the box. The earpiece speaker is located on the top, while the power button is shifted to the right and doubles as a fingerprint reader. On the front, hole-punch camera cutout is shifted to the centre as opposed to the top left. Overall, design and build were quite solid for a mid-range 5G phone.

For the display, the Mi 10i sports a 6.67-inch FHD+ IPS LCD panel with a 1500:01 contrast ratio and a brightness of 450nits. Like the Mi 10T Pro, the Mi 10i also features a 120Hz refresh rate with support for AdaptiveSync, which automatically adjusts the refresh rate to 30Hz, 48Hz, 50Hz, 60Hz, 90Hz, or 120Hz depending on the requirement of the content on the screen. There's TÜV Rheinland certification for blue light emission. You can also select your preferred level of white balance and colour saturation manually. The display is HDR and HDR10+ compliant, and the device is L1 certified. There was a noticeable difference in the quality of the panel between the Mi 10i and the more expensive Mi 10T Pro, although there's not much to complain about on the display front. As far as LCD panels go, this is as good as it gets at this price, but it's still no OLED. I think compromising display tech for a high refresh rate was the right way to go here.

As a mid-range smartphone, the Mi 10i is pretty formidable, packing a Qualcomm Snapdragon 750G SoC. The chip is paired with an integrated Snapdragon X52 modem and comes with up to 8GB of RAM and up to 128GB of UFS 2.2 storage. The Mi 10i managed an overall score of 332142 points on AnTuTu. The phone can run any game without too much of a bother. The handset also runs cool under pressure, while multitasking is pretty fluent. I had no trouble gaming on the phone as well. 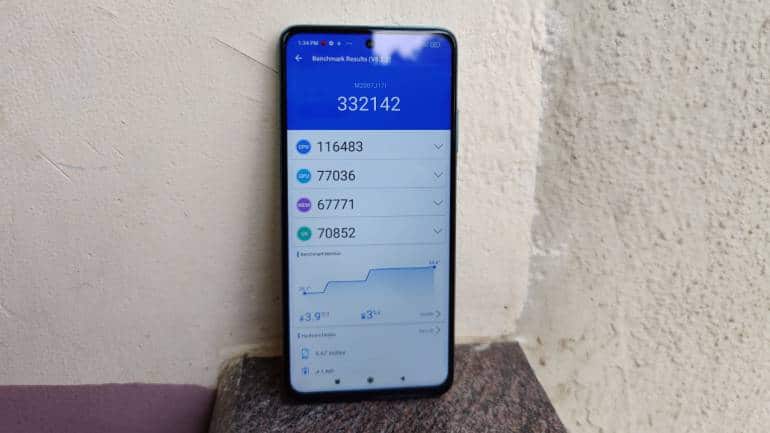 I tested Call of Duty: Mobile, Raid: Shadow Legends, Asphalt 9: Legends and Darkness Rises on maximum presets without experiencing any noticeable dips in performance. The Snapdragon 750G combined with the new UFS 2.2 storage standard ensure apps open quickly and the overall smartphone experience is smooth. Xiaomi seems to have struck an excellent balance of price-to-performance with the Mi 10i. The primary camera takes 12 MP shots by default, with the sensor combining nine pixels into one. Photos captured on the main camera retain a ton of detail with good dynamic range, white balance, and contrast. Sharpness was a hit and a miss, with the camera offering mixed results. There was an over sharpness issue, but I'm confident it can be ironed out with software updates. The Mi 10i's 108 MP camera also captures accurate, true to life colours for the most part.

The main camera offers 10x digital zoom, but I preferred using the 108 MP mode and cropping the image rather than fully zooming in as stabilisation tends to go out the window. Since the camera doesn't support any kind of optical zoom, you will notice unnecessary smoothening and softening even with a 2x zoom. In good lighting, the 108 MP mode will allow you to crop photos while retaining excellent detail, although an image shot in the full 108-megapixel resolution will take over 20 MB of space.

As the sun begins to set, the 108 MP camera tends to become less effective, with noticeable softness in images despite HDR turned on. There is a Night mode here that works quite well. Photo captured with night mode tends to retain fair amount of details with good exposure. So, long as you're capturing stills, the night mode on the Mi 10i is well-above average. The 108 MP sensor snapped images with a ton of detail with little to no noise. The sensor also managed to capture a fair bit of light, even in dimly lit scenarios. 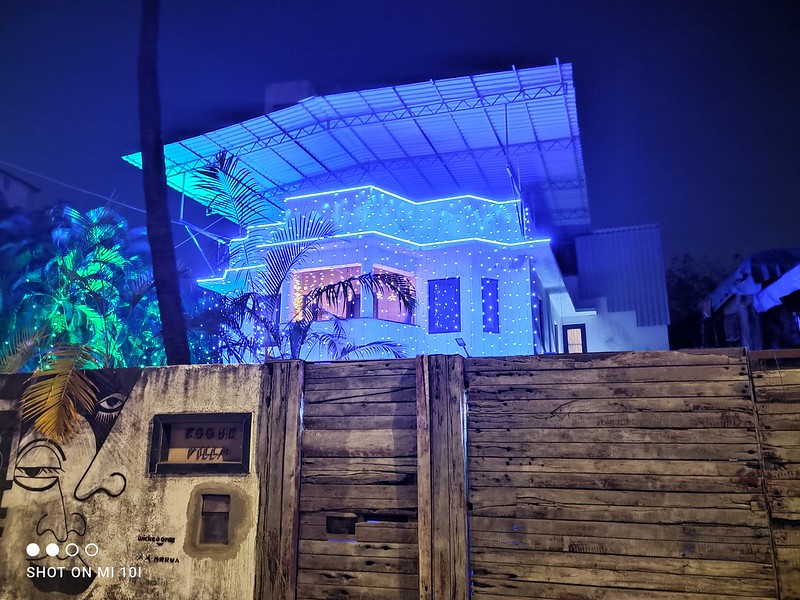 The ultrawide camera struggles to keep pace with the 108 MP sensor, with a noticeable difference in sharpness and colours. However, the results are not too shabby. As compared to the competition, this is definitely one of the better ultrawide cameras around. I had no hesitation switching from wide to ultrawide to snap photos in the right light. However, the ultrawide camera tends to fall apart in anything but bright outdoor light. I'm not a fan of macro cameras on phones, and the Mi 10i hasn't changed my mind in the least as the sensor struggles to offer consistent results.

The camera app is pretty easy to use and has a ton of different modes, including Vlog mode, Portrait mode, Pro mode, and much more. The rear camera also supports 4K video recording at 30fps, while you can also use the Dual video mode to record videos on the front and rear camera simultaneously. The lack of stabilisation was a letdown, but videos had a good amount of detail and sharpness. Colours tended to look a little oversaturated at times, especially at night. Additionally, the phone has a Dual Video mode that allows you to capture video on both the front and rear camera simultaneously. However, you can't switch between main and ultrawide cameras while recording videos.

The front camera on the Mi 10i captures good selfies given the right light, skin smoothening is turned on by default with the camera capturing a good amount of details. You can also turn HDR on and play around with a bunch of filters. Portrait selfies come out quite nice, but there were a few times when the edge detection wasn't on point. There's no night mode for selfies, but you can use the flash to get decent results. For a mid-range smartphone, the Mi 10i offers a pretty capable main camera. I think it is safe to say that this is the best primary camera on a smartphone under Rs 25,000. I still don't think the other three cameras offer a lot in terms of utility, but the ultrawide camera performance was pretty decent in the right light. Additionally, night mode on the Mi 10i is well-above average, even more so if you consider the price. The camera setup on the Mi 10i faces the same consistency woes between lenses as other phones at this price, although it is safe to say the main camera on the phone is significantly better than the competition. In terms of battery life, the Mi 10i can easily go a full day on a single charge with its 4820 mAh battery capacity. The phone offers little over a day and half of regular usage on a single charge.  Additionally, Xiaomi has also included a 33W fast charging adapter in the box, which took the phone from 5 percent to 100 percent in little under an hour. Xiaomi AdaptiveSync technology also works well to preserve battery. It is easy to forget that the Mi 10i's screen has a 120Hz refresh rate and doesn't have a more efficient OLED panel.

The Mi 10i runs on Android 10 with Xiaomi MIUI 12 on top. MIUI 12 brings a ton of UI customisations and new features like a reading mode, Game Turbo mode, video dashboard, Second Space for privacy, and more. The UI is not free from bloatware and promotional content, but there are ways of turning some of it off in the settings. I had to uninstall quite a few third-party apps as well. It was quite pleasing to see that the number of spam ads or push notifications on the phone have reduced dramatically as compared to MIUI 11.

At a starting price of Rs 20,999, the Mi 10i is the next best thing to a flagship killer. It was impressive to see just how much the gap has narrowed between main cameras on mid-range and top-end phones. Apart from the camera, the Mi 10i also offers decent battery life and an extremely good LCD panel with a high refresh rate. Sure, the phone does come with some caveats, but none of which are deal-breakers. MIUI still hasn't won me over just yet, but with the hardware, on this phone, it was easy to look over the Mi 10i's software woes. Another weakness on this phone, as with any phone at this price, is the consistency between the primary and ultrawide cameras. That being said, at its current price, the Mi 10i offers the 'best-in-class' hardware coupled with just about decent software, ensuring you get the best bang for your buck.
Invite your friends and family to sign up for MC Tech 3, our daily newsletter that breaks down the biggest tech and startup stories of the day
Carlsen Martin
Tags: #smartphones #Xiaomi
first published: Jan 21, 2021 07:22 pm