DATA STORY: How Indians view religion in the country

A startling 62 percent Indians agree that religion does more harm than good as per a study by Ipsos titled “Global Views on Religion”. The survey which analysed attitudes to religion across the world also revealed that 70 percent of Indians polled said they somewhat agreed that religion defined them as a person.

A startling 62 percent Indians agree that religion does more harm than good as per a study by Ipsos titled “Global Views on Religion”. The survey which analysed attitudes of different countries to religions also revealed that 70 percent of Indians polled said they agreed that religion defined them as a person. From the sample of the countries that were surveyed, on an average, about 38 percent of the people globally admit that their religion defined them as a person. 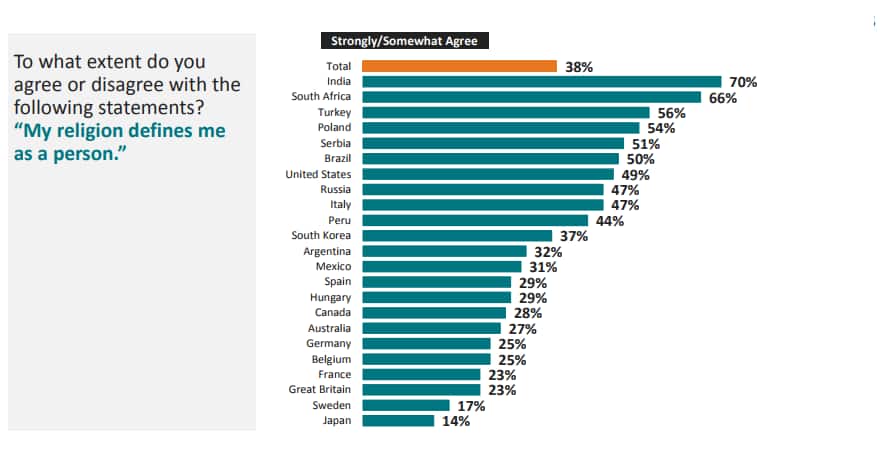 Indians are less tolerant of people who are not religious when compared with the rest of the world. India tops the ranking with 46 percent agreeing that they lose respect for people when they find out they are not religious. India is home to at least nine major religions.

According to the 2011 census, 80.5 percent of the population of India practices Hinduism and 13.4 percent are Muslims, while the remaining 7.1 percent adheres to other religions (Christianity, Sikhism, Buddhism, Jainism and various indigenous ethnically-bound faiths). Christianity is the 3rd largest religion in India.

As per the report, 62 percent of India agrees to the fact that religious people are, in fact, “better citizens”.  To a question on whether or not religious practices form an important factor in the moral life of a country’s citizen, 78 percent of Indians said yes, it does.

Why does this matter

A study by the Pew Research Centre predicts India to have the largest population of Hindus and Muslims in the world by 2050. Such a large chunk of two of the world’s major religions implies that India’s opinions will have an impact on the global outlook on religion. In 2050, an estimated 1.3 billion Hindus and 311 million Muslims will inhabit the country.

The tolerance for diverse cultures and religious beliefs, co-existing with an apprehension for people who do not follow a religion, goes on to define how deep the Indian mindset is invested in religion.

As many as 130 people lost their lives and about 2,200 were injured in communal violence on an average every year in India between 2005-2009, as per a 2011 study by PRS Legislative Research.

In April 2017, Pew Research Centre did an analysis of 198 countries and ranked India as the fourth worst in the world for religious tolerance.

India was also in the top three spots in religious “hostilities” index study conducted by Pew Research Centre along with a top spot in social hostilities index.