Hopefully, the assurances on the cattle slaughter ban by the government before the SC on June 15 will help it to focus more on economic development than on cattle related issues.

Hopefully, it will finally allow the milk, meat and leather sectors to remain vibrant industries in the rural economy sector.  Collectively, they generate wealth, rural employment and foreign exchange as well. And all of them are interlinked, which somehow, short-sighted policymakers often forget.

But before we move to that part, it is good to take into account two factors.

First, India has the largest cattle population in the world.  This includes both cows and buffaloes.  Second, the milk industry in India is gradually being dominated by buffaloes, and not by cows. True, buffaloes currently account for just 33 percent of cattle (though its share in cattle population has been growing rapidly).  But when it comes to production of milk, they account for 55 percent of the total milk production in the country.

Things could have panned out differently. But over the years, squeamishness over cow slaughter has reduced the resale price that a non-lactating cow could fetch. Add to this the higher price commanded by buffaloes’ milk (on account of its higher fat content), and the higher resale value of buffaloes (because till recently there was no law that prevented sale and slaughter of buffaloes). Farmers increasingly opted for buffaloes instead of cows. Not surprisingly, the ratio of cows to buffaloes has been under threat.

Thus, when the Union Ministry of Environment, Forests and Climate Change (MoEFCC) notified new rules under the Prevention of Cruelty to Animals Act there was a howl of fury. These laws affected buffaloes as well. It was to challenge this and other laws that various parties filed appeals before various courts.  That led to the government clarification before the Supreme Court on June 15, 2017.

The howl of fury had three reasons.

First, it affected some very large business interests – especially of people who belonged to the slaughter and leather industries.

Second, it threatened to render countless millions of people unemployed because both industries – slaughter and leather -- are large and labour- intensive. This time, the protests of the rich had the backing of a large mass of people whose jobs could have been at stake.

Third, it affected the eating lifestyles of people in states like Kerala, Tamil Nadu, Odisha, West Bengal and other states in the North East. And since backward communities were also involved – both as labour and as consumers -- there was a real danger of this protest turning into a political backlash. That fear, and the court hearings, finally compelled the government to offer an olive branch.

One oft-heard justification of the government was that the new rules were meant to curb smuggling of cattle across India’s borders. Really? If cattle is being smuggled out of India, so what?  It should be smuggling into India that should be a problem. That is when a country loses foreign exchange. It also runs the risk of genetic pollution and contamination. If other countries want our animals, India should be exporting them and earning money and creating jobs. Moreover, buffaloes did not involve religious sentiments either. Somewhere, somehow, economics appears to have run astray. The fact is that meat is not only meant for domestic consumption but is also a major export industry (see table 1). And much of the meat comes from buffaloes.  That explains the absence of any howl of protest when transport and slaughter of cows were banned. But now they would affect buffaloes, hence jobs and money. The resultant fury was enormous.

After all, the manner in which India has managed to create a market for buffalo meat exports is truly amazing.  Conventionally, the market for beef was restricted to cows’ meat (See table 2). It was the native genius and dexterity of the Indian entrepreneur that could carve out a share of this global market for buffalo meat. It is one of the top five exporters in the world.

As the 2016 GAIN report of the USDA Agricultural Service (https://gain.fas.usda.gov/Recent%20GAIN%20Publications/Livestock%20and%20Products%20Annual_New%20Delhi_India_8-31-2016.pdf) puts it, “ India’s 2017 water buffalo meat (carabeef) and beef production is projected to increase marginally by two percent to 4.4 million tonnes carcass weight equivalent (CWE) due to population growth and moderate export demand.”  But this can happen only if the government does not thwart such efforts. 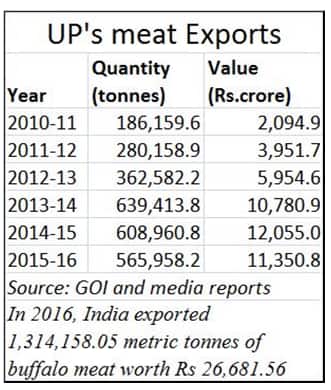 The worst casualty was expected to be Uttar Pradesh (UP), because much of the meat comes from this state. While some of it is exported, the rest is used for domestic consumption. Hence, the industry plays a vital role in providing food for the domestic market as well. So, when the new notification came, it was not surprising that big businesses would go knocking at the doors of the apex court.

The industry had suffered enough.  It was racked by the developments on the cattle front during the past couple of years. Meat exports were hit. According to APEDA statistics, buffalo meat registered a decline of 6 percent over the past year, with the value of exports sliding from USD 3.74 billion to USD 3.52 billion (http://gulfnews.com/culture/people/india-s-beef-exports-hit-by-cow-vigilantism-1.2028673).

The total value of other types of meat is not known, but as can be seen from the table, buffalo meat is the largest contributor to the meat basket of India. 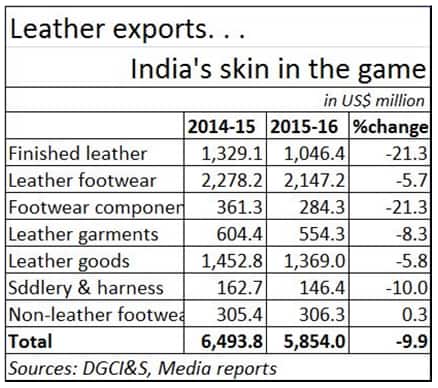 Add to this another major loss for the country.  It will see its leather (and bone) industry getting hurt irreparably (see table 5). And, like beef exports, once customers find a source-country unreliable, winning back customers overseas can be a Herculean task.  And this does not include a domestic market for leather goods, which is reckoned to be several-fold bigger.

But the biggest casualty could be labour. Exact numbers of people affected are not available, because much of the labour force is unorganised in these sectors. However, at a time when India has not been able to create employment in the numbers that it requires, it is stupidity to extinguish even those jobs that exist. Demonetisation had already hurt unorganised labour savagely.

Yet another nightmarish consequence of all these laws taken together is that it will harm Operation Flood that Verghese Kurien so carefully crafted with support from successive governments.  It was this strategy that has make India the largest milk producer in the world, and Amul the largest agricultural brand in the country (http://www.asiaconverge.com/2015/12/five-things-that-sets-amul-apart-from-others/). If you reduce the profitability of cows and buffaloes, the industry loses its appeal.

It is good to learn that the government is now re-thinking its earlier moves on this front. The sad part is that a few policy makers – and this includes both legislators and bureaucrats – bothered to factor in the consequences of such recklessness.

(This is the second and concluding part of a series on the economics of the cattle slaughter ban. The writer is a senior journalist).
Tags: #Business #Current Affairs
first published: Jun 19, 2017 11:27 am