6 new spirits for your bar at home

From Caribbean rum to a London Dry gin, these are the spirits that should find a place in your bar.

The Louis XIII Mathusalem, which contains six litres of the cognac, is made by 20 crystal artisans.

French spirits company Maison Ferrand, which owns Plantation rum, has been in the news for all the wrong reasons over the last five odd years. The company, which makes a lot of its rum in the Carribean — primarily Barbados and Jamaica — and also ages some in France, has come under fire for the name of its 19-year-old brand that taps into slavery and for resisting a proposed GI for rum made in Barbados.

Its rums, however, continue to be highly dependable. These include the 3 Stars (Rs 3,400 in Mumbai) and the Original Dark (Rs 3,500) that have been brought to India by Goa-based Third Eye Distillery, which makes Stranger & Sons gin. The former, a white rum, is blended from both aged and unaged rums from Barbados, Jamaica, and Trinidad, while the latter is made of rums, which, after being aged and blended in the Caribbean, are double aged, usually in cognac barrels, in France. Louis XIII is the Rolls-Royce of cognacs. You have to be either plain lucky or crazy rich to sip the century-old liquid that its decanters contain. Only the best grapes, grown in Grande Champagne, the heart of Cognac’s wine-growing region, are used in the making of the cognac.

While Louis XIII has been available in India for a while, Remy Martin recently launched the cognac in two of the largest and rarest decanters in its range. It takes 11 craftsmen to create the 3-litre jeroboam, which is mouth-blown, and then cut, shaped, and painted by hand. Only 200 jeroboams are made each year.

The even rarer mathusalem, which contains six litres of the cognac, is made by 20 crystal artisans. (Most wine bottle sizes are named after biblical characters.)

The exclusive cognacs are available for pre-order at About Mansionz by Living Liquidz and Vaz Enterprises in Goa.

Prices are on request, but it would be a good idea to keep in mind that the standard Louis XIII, which comes in a 700ml decanter, costs around Rs 2.85 lakh in Bangalore.

After a procession of gins, with an odd rum and tequila in between, the latest spirit to come out of Goa is a rum. Surbhi Wines, the makers of Earth, describes it as a spice-infused rum (read cinnamon, pepper, and star anise) that can not only hold its own as a sipping rum, but also light up cocktails. The company says it has more launches in the pipeline, including a gold rum and a premium whisky. Earth rum (Rs 1,350 for 700ml) is at present only available in Goa. Founded in 2009, Sipsmith was the first gin distillery to acquire a licence for small-batch gin distilling in the UK in nearly two centuries, and has won acclaim for its modern take on the London Dry gin. This is the gin to have if you are looking for some lovely juniper bounce and citrusy freshness. Sipsmith is available in major metros, and costs between Rs 5,485 and Rs 7,000. Limited edition cask-aged variants appear to be the flavour of the season. If you missed Fullarton Distilleries’ Pumori, which featured gin aged in American Oak barrels, go out and get your hands on the Nilgiris. The gin is matured in first, second, and third-fill ex-bourbon casks for about three months. Amrut says its distillers experimented for over a year to “extract the desirable wood congeners and add a subtle yet dynamic profile to the original Nilgiris gin.” The gin, which is limited to 1,800 bottles, is priced at Rs 3,295. Nilgiris is matured in first, second, and third-fill ex-bourbon casks for about three months.

When it comes to quality blends, the Dewars Double Double is right up there. Launched in 2019 in the US, the Double Double series comprises malt and grain whiskies that are aged, blended together, aged again, and then finished in sherry casks. The four-step process, says Dewars, enhances its whiskies’ inherent smoothness. The three whiskies in the range, 21 YO, 27YO, and a 32YO, are finished in Olorosso, Palo Cartado (a dry and elegant sherry wine), and Pedro Ximenez casks, respectively. 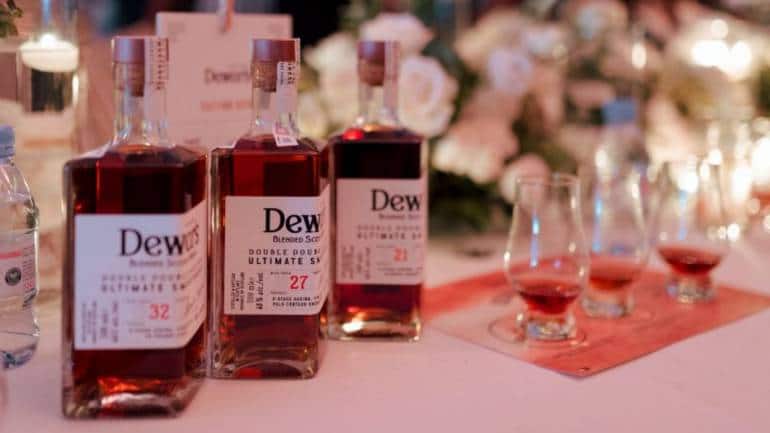