you are here: HomeNewsIndia
As of October 6, eighty percent of India’s 135 coal-powered plants had less than eight days of supplies left, and more than half of those had stocks worth two days or fewer. So what went wrong? Here, Moneycontrol examines the issues that led to the coal shortage in India, the world’s third-largest importer, despite having large proven reserves.
Updated : November 02, 2021 / 10:52 PM IST

In the first week of October 2021, several reports surfaced regarding the coal shortage in the country, with states and Union territories complaining that they have only 2-3 days of coal storage left to produce electricity via thermal power plants. States such as Punjab, Rajasthan, Maharashtra, Andhra Pradesh and the union territory of Delhi faced power outages for several hours a day. Politicians, central ministers and state chief ministers even started playing the blame game, while none seemed eager to take the responsibility to resolve the issue.

Reasons such as excessive rainfall, international price rise, Covid-19 pandemic, less production, transportation issues including freight rates and high consumption were cited as the reason for the coal shortage. In short, power generation has taken a hit and people living in the cities emerged as the sufferers.

According to International Energy Agency (IEA), coal-generated power plant account for around 70 percent of India’s electricity generation. As of October 6, eighty percent of India’s 135 coal-powered plants had less than 8 days of supplies left — more than half of those had stocks worth two days or fewer.

According to CRISIL's Director of Research Hetal Gandhi, the average coal inventory that power plants had was around 18 days’ worth of supply over the last four years.

So what went wrong? Why is coal shortage choking the power plants in India and what will be its impact on the domestic power sector? Here is a close look at the issues that led to the country’s energy crisis. In the first eight months of 2021, India's power demand rose by 13.2 percent after a decline for the first time in over three decades in 2020. Indian power producers such as NTPC Ltd, Tata Power and Torrent Power's shares rallied with higher power demand.

Between April 1 and September 28, Coal India Limited supplied about 243 million tonnes of coal to utilities, which is 24 percent higher than the same period last year. It was 11 percent more compared with April-September 2019.

On 7 July, India’s peak electricity demand recorded an all-time high of 200.57 giga watt (GW) which was seen as a reflection of revival of economic activity in the country. Currently, the demand is around 192-193 GW.

“The all-India energy demand recovered 11% yoy to 124.8 billion units (BU) in July 2021, the highest demand since July 2019. The recovery was owing to stabilising economic activities, led by the decline in the number of COVID-19 cases throughout the country," India Ratings and Research said in a statement. 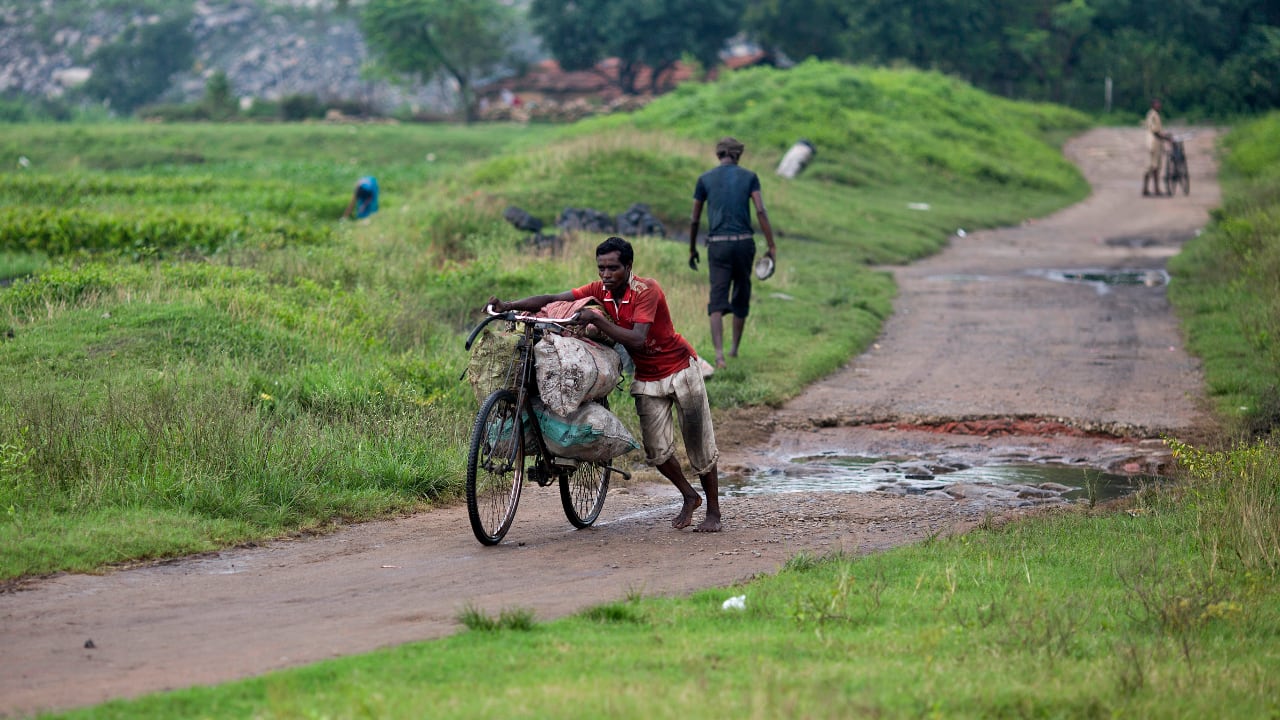 A local man carries sacks of coal on his bicycle taken from open coal field at Dhanbad district in Jharkhand. (PC-Reuters) 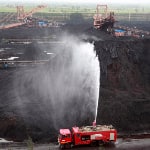 Being the world's third largest coal importer, India's imported supplies have shrunk by an unprecedented 44 percent in August-September alone. This resulted in an additional burden of nearly 17 million tonnes of coal on domestic producers.

Factors including unseasonal rainfall in Indonesia, Covid-induced production cuts in Australia, and rising power demands in China have led to the price rise of coal. India currently sources 43 percent of its imported coal from Indonesia and 26 percent from Australia, mostly used by power generating thermal plants. Coal imports at a glance. (Graphics-MoneyControl) 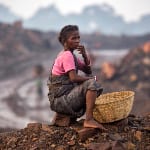 Total estimated reserves of coal in 2020 were 344.02 billion tonnes, an addition of 17.53 billion tonnes over the 2019 in corresponding period, according to the Energy Statistics India 2021 report, published by MoSPI. 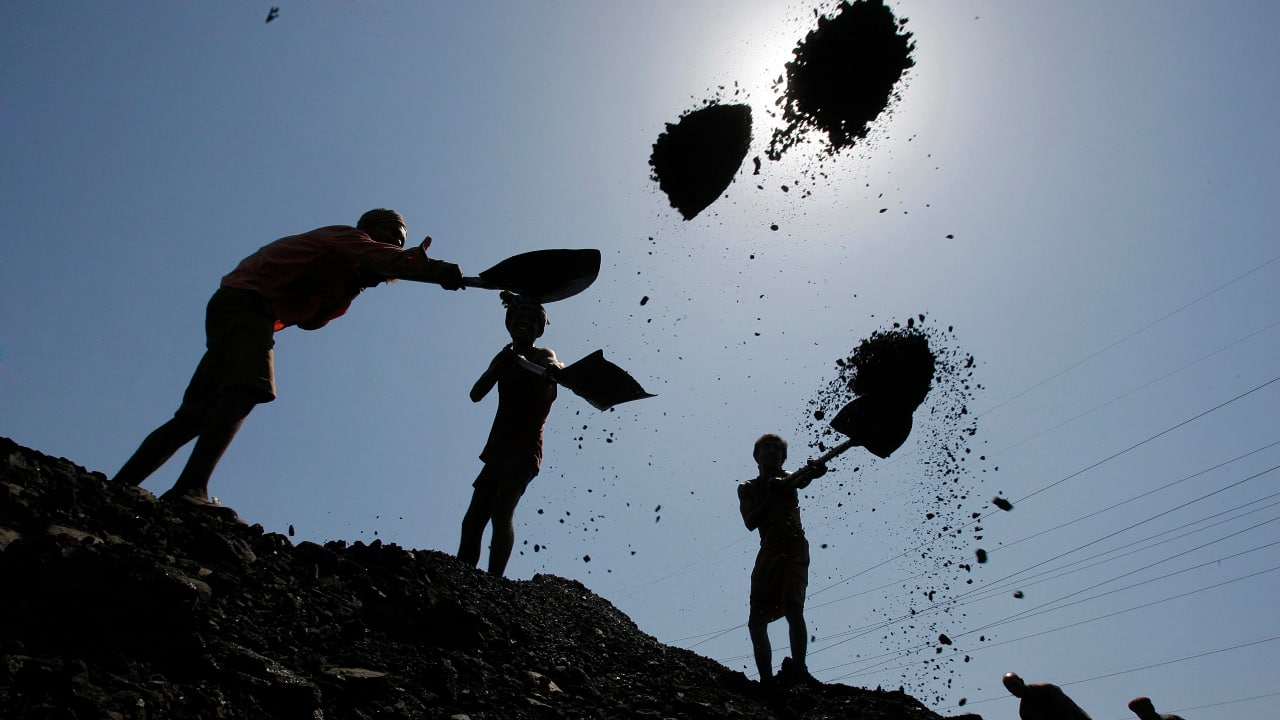 Similarly, there were a total of 23 refineries in the country, 18 in the public sector, 3 in the private sector and 2 in joint venture, says the report. 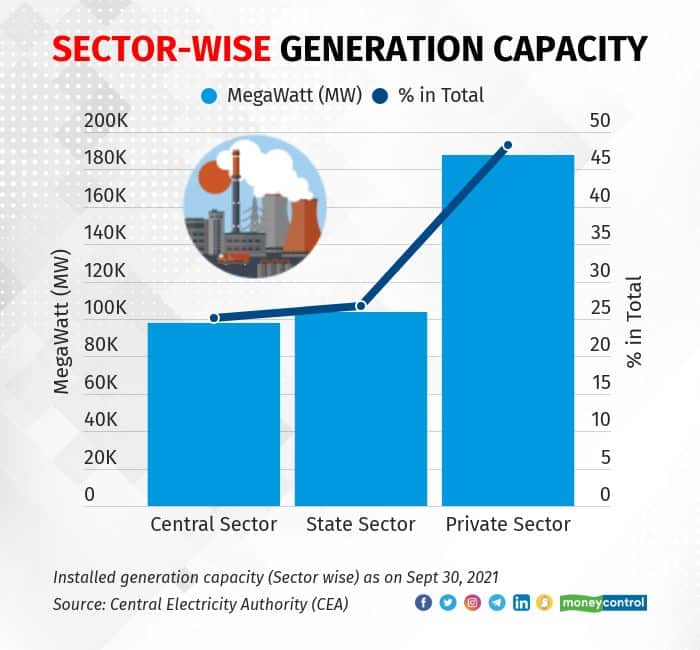 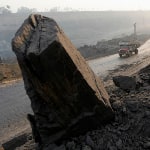 With coal crisis surging at a steady pace, the government stepped in. However, the equations still looks misbalanced.

By putting the blame on high international prices or shortfall of supply due to various reasons, power generating firms can't run away easily.

Reports claim that default in payments by power plants or generating companies to Coal India forced the miner to go slow on deliveries to those with large outstanding. As of August 31, power utilities owed Rs 31,356.75 crore to central public sector enterprises such as NTPC, Neyveli Lignite Corporation and PowerGrid Corporation of India.

Number of power plants put on the delivery-against-payment list doubled after the payment crisis got worse between June and October. 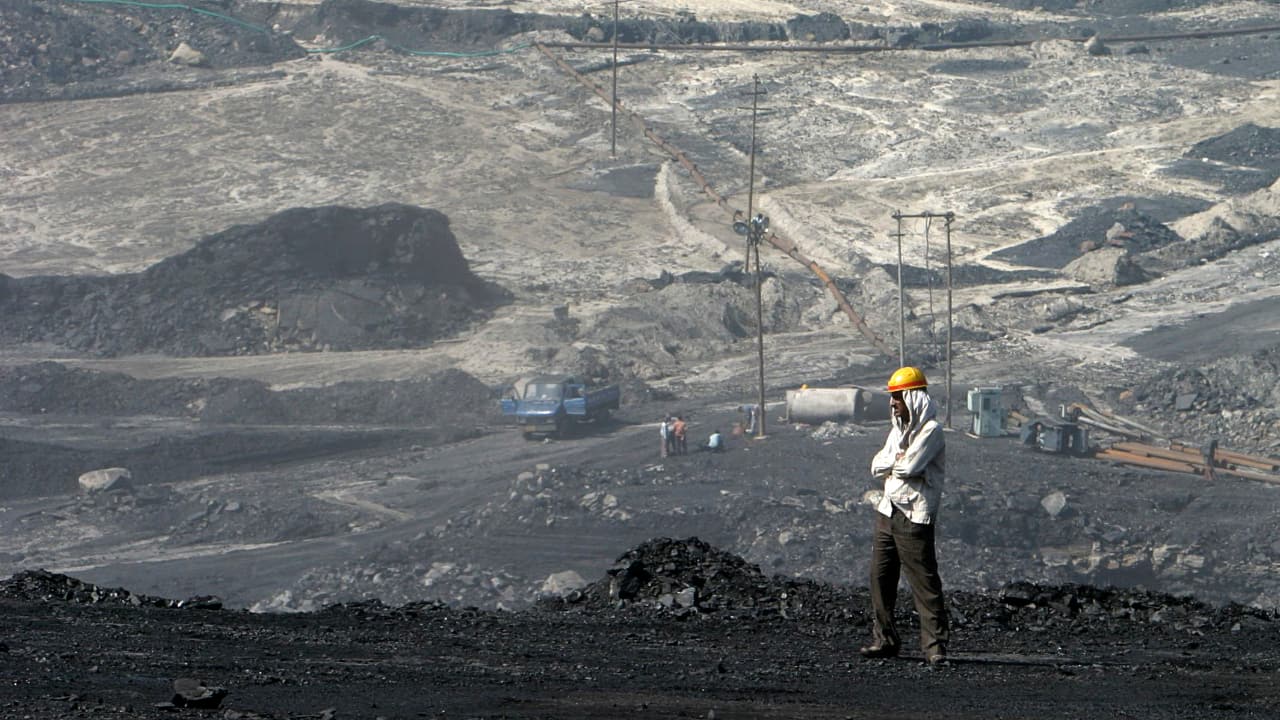 A miner stands at the Gevra coalmines in Chhattisgarh. (PC-Reuters)

Other factor that made the coal crisis worse was generating companies' failure to build stocks during the pre-monsoon months as per normative requirements. Power generating companies on average held just about 15 days’ worth of coal in June when the supply and demand were relatively better matched.

This resulted in accelerated demand, which led to power companies’ consumption outpacing at a rate at which supplies were replenished.

The failure to build stocks is also reflective of the poor projection and planning for a surge in demand with the phased unlocking of the economy. Though the coal output from the mines were higher compared to the corresponding period of the last year, it was not enough. Supplies from domestic sources were 14 percent lower in August compared to May and that from imports were down 49 percent. 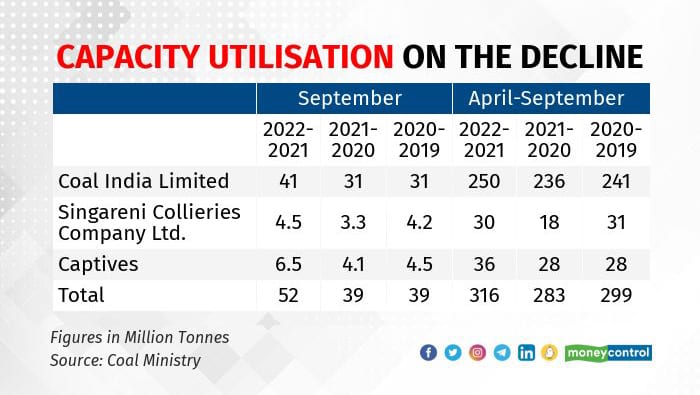 To tackle the shortage and production issue, the Coal Ministry has taken several steps, with Coal and Mines Minister Pralhad Joshi informing that around 22 lakh tons of coal have been dispatched to various thermal power plants across the country.

On October 30, 2021, Joshi took to Twitter and wrote, “Happy to share that total coal dispatch to thermal power plants recorded 22 lakh tons on Thursday. Out of this, Coal India HQ's contribution has been 18 lakh tons. I would like to congratulate all coal companies for this feat and urge them to keep increasing production and offtake.”

Joshi had mentioned earlier that he personally visited the South Eastern Coalfields and directed the officials to fulfil the demand for thermal coal power. Also, he added the government is increasing coal dispatch to power plants further to ensure sufficient coal stocks at power plants.

She was of the opinion that if imported prices go up substantially, the incentive for domestic manufacturers to import coal and produce power is on the lower side. 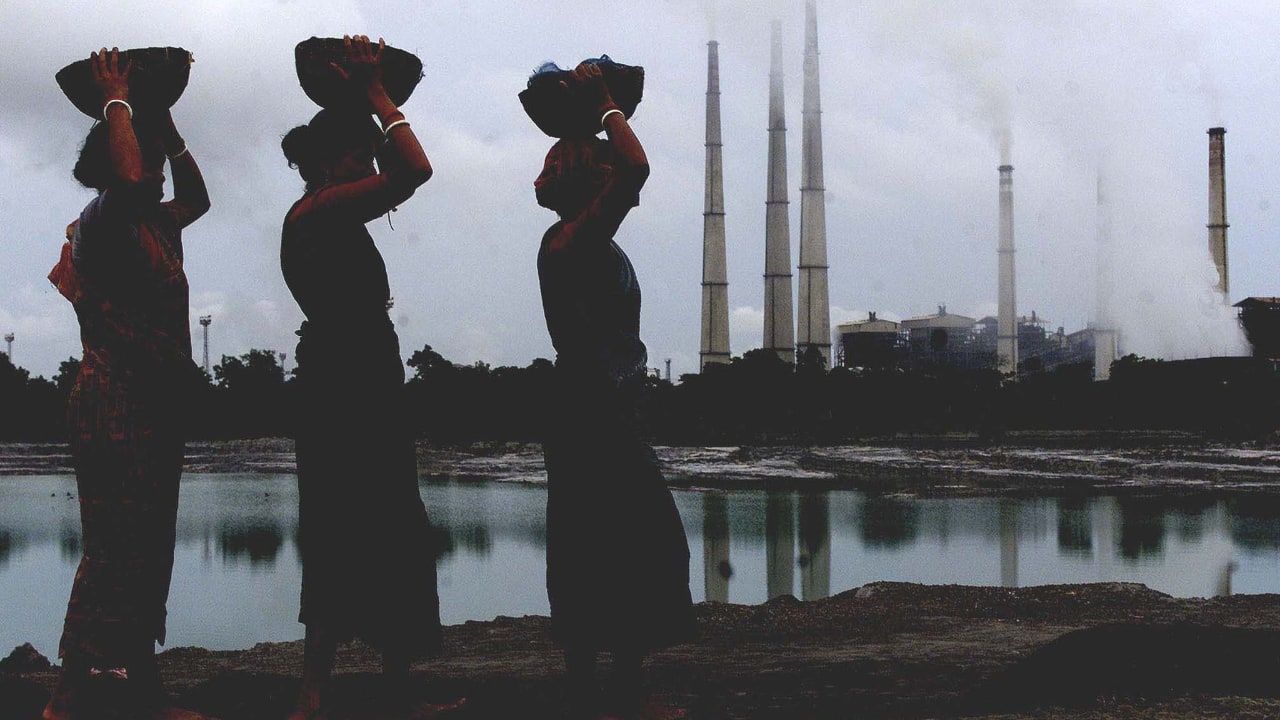 “If demand goes up substantially, I don’t know what could be the steps, but you could look at steps like they may bring about curb on exports in sectors which are power-intensive in nature,” said Gandhi.

With festival of lights – Diwali – being celebrated in the first week of November and the winter approaching, the demand for electricity may breach the expected level again. The Question is, have the coal-generated power firms learnt their lesson or the situation of coal crisis will sustain? It will be an uphill task for both the power generating firms and the government to tackle this issue.