What led to the coal crisis?  Was it only an unusual spike in demand?

India’s power situation continued to remain critical as 17 thermal power plants had zero days of coal stocks as of October 10, with production and despatches from coal mines falling short of demand. Another 26 plants had stocks for one day. Together these 43 plants can produce about 51.36 gigawatts (GW) of power with a regular supply of fuel, that’s about 31% of the power from coal-fired thermal power plants.

Most other power plants are not in a comfortable position either. On average, 135 coal-fired thermal power stations had stocks to last just four days against a normative stock requirement of a little more than 21 days.

Almost all plants that reported zero days of coal stocks were among those that were required to hold enough inventory to generate power for 30 days, including the 1.82 GW NTPC-owned Dadri plant that supplies power to the National Capital Region. Ten of 20 coal-fired power plants, each with generating capacity of 2 GW or more, were operating with two days worth of stocks or less, as subsidiaries of Coal India struggle to increase output to match the spurt in power demand.

Coal is the predominant source of power, with over 70 percent of India’s power generated by coal-fired plants. Therefore, any supply disruptions caused by accidents at mines, extreme weather events, labour strife and logistics problems can affect electricity generation within days. Coal mining in the first quarter of the fiscal year was affected when many miners fell ill with the Covid19 infection and in the second quarter due to flooding of mines caused by excessive rains.

India’s current crisis was not caused solely by a shortfall in the supply of coal when demand picked up. Default in payments by power plants or generating companies to Coal India forced the miner to go slow on deliveries to those with large outstanding. Such power plants were given coal supplies only against payments.

Generating companies defaulted on payment due to the failure of distribution companies to pay up for power, many have outstanding of more than 45 days. Power utilities owed Rs 31,356.75 crore to central public sector enterprises such as NTPC, Neyveli Lignite Corporation and PowerGrid Corporation of India, as of August 31.

There is a third problem for the current crisis – the failure of the generating companies to build stocks during the pre-monsoon months as per normative requirements. Even in June, much before the power crisis emerged, power generating companies on average held just about 15 days worth of coal.

As a result, when demand started accelerating in July, power companies’ consumption outpaced the rate at which supplies were replenished. This led to a rapid decline in the closing stock of coal from July. 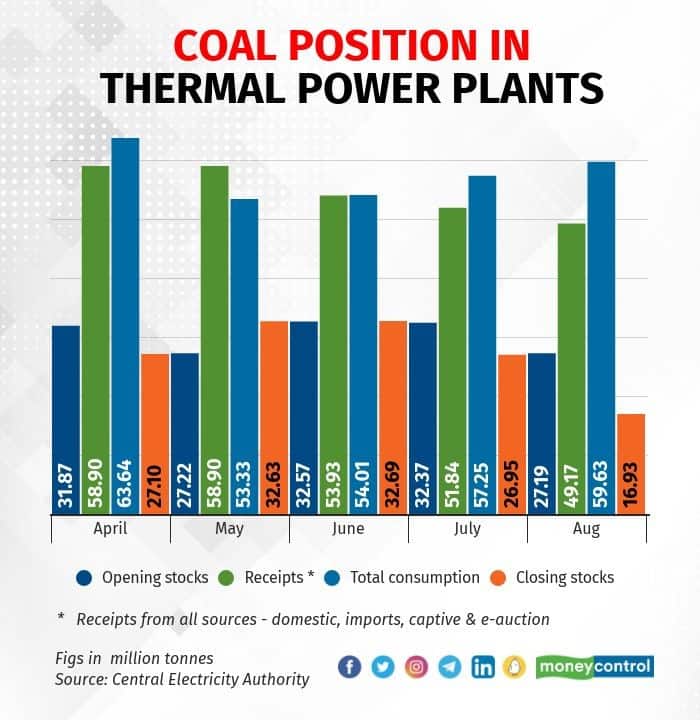 The failure to build stocks is also reflective of the poor projection and planning for a surge in demand with the phased unlocking of the economy. The robust rebound in power demand as the second wave of the Covid19 pandemic ebbed took policymakers and power sector managers by surprise.

Coal output and despatches from the mines were higher compared to the corresponding period of the last year, yet it was not enough. However, on a sequential basis, supplies from both domestic and imported sources declined after May. Supplies from domestic sources were 14 percent lower in August compared to May and that from imports was down 49 percent. Imports account for a tiny fraction of coal supplies to power plants and its share has declined from 6 percent in May-June to 4 percent by August. Coal India and Singareni Collieries Company Ltd are the main domestic suppliers of coal. Singareni is a relatively small mine that supplies mostly to power plants in southern India. Captive coal mines is also a source of feedstock for a few plants. Coal India and its subsidiaries produced 249.82 million tonnes of coal between April and September, which was 5.9 percent more than the same period of 2020-21 and 3.7 percent more than the output in April-September of 2019-20. About 79 percent of coal produced domestically came from the mines of Coal India. Singareni Collieries’ share was about 9 percent and the balance 11 percent came from the captive mines. 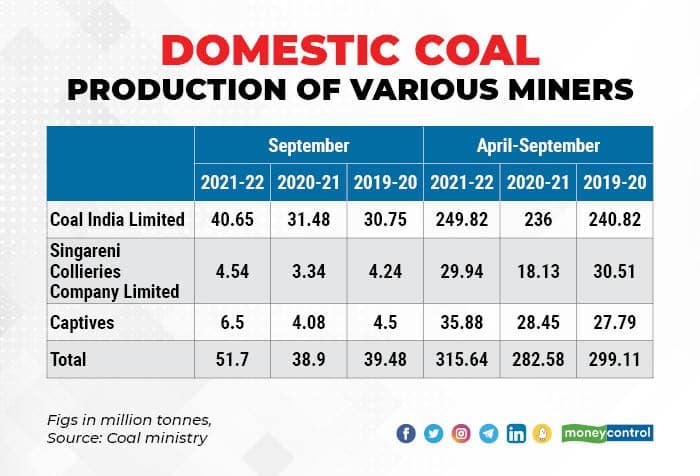 Output at both companies has risen sharply in September in response to the spurt in demand. Coal India’s output was up 29 percent and Singareni Collieries’ by 36 percent. Over 81 percent of the coal despatched in the first half of the fiscal year was delivered to power plants. That ratio climbed higher to almost 85 percent in September as the power demand climbed. Yet, this increased supply could not avert the current crisis. The daily report on coal stocks from the Central Electricity Authority shows that about 60 plants are running low on stocks as they are not getting adequate supplies from Coal India and Singareni Collieries. Another report of energy required and supply show that states in north India faced a higher shortfall, not just in September but all through the April-September period. Meanwhile, consumers in several parts of the country have begun to experience planned and unplanned blackouts as power distribution companies try to balance demand with supply from the power plants.
Tina Edwin is a senior financial journalist based in New Delhi.
Tags: #Coal shortage crisis
first published: Oct 12, 2021 04:54 pm