Afghanistan was the most affected by terrorism followed by Iraq, while India ranked 8th on the Global Terrorism Index 2020. The global economic impact of terrorism was estimated at $26.4 billion in 2019, down 25 percent over the previous year

For the second year in a row, South Asia was the most impacted region by terrorism in 2019, recording more deaths than any other region, despite improvements in Afghanistan, Pakistan, and India, said Global Terrorism Index 2020 report by The Institute for Economic & Peace.

India ranked eighth - with a score of 7.353 - on the index that measures the impact of terrorism.

The country reporting a high score out of 10 on the index is ranked on top as the worst impacted nation. 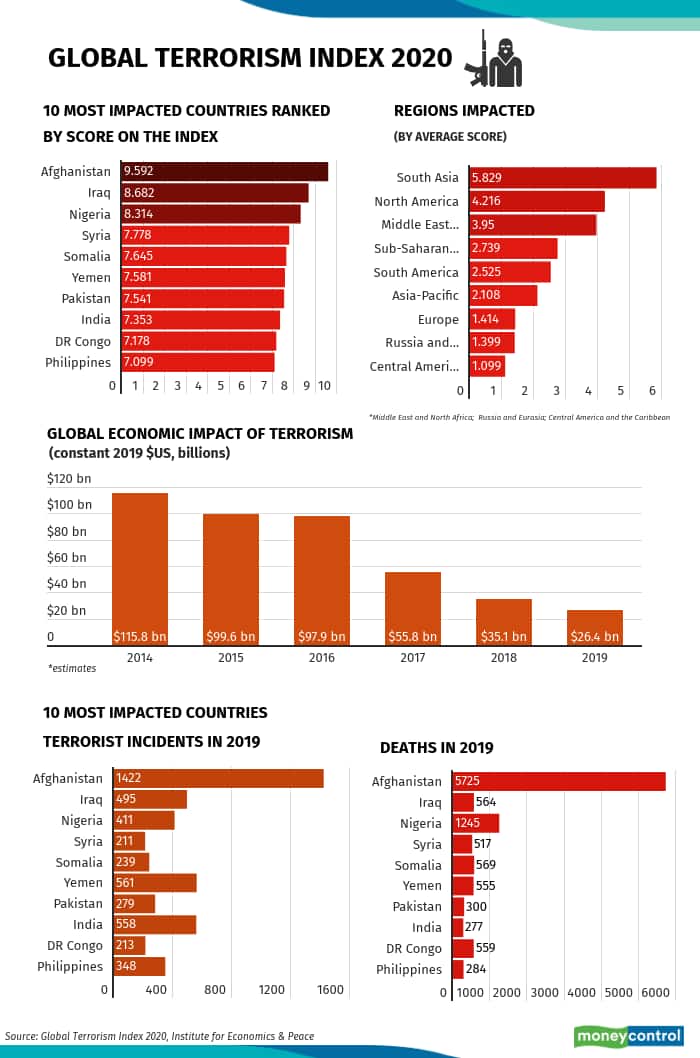 Taliban, Boko Haram, Islamic State of Iraq and the Levant, and Al-Shabab were the four terrorist groups responsible for the most (55 percent, or 7,578) deaths due to terrorism in the region in 2019.

India reported 558 terrorist attacks in 2019, recording 277 deaths, according to the release. “Compared to other countries amongst the ten most impacted, India faces a wider range of terrorist groups, with Islamist, communist, and separatist groups active across the country,” the report said.

However, the number deaths caused by terrorism as well as the number of terror attacks in India declined by 20 percent in 2019.

In India, Jammu and Kashmir was the most impacted region in 2019, reporting 165 attacks and 103 deaths, followed by Chhattisgarh (85 attacks and 53 deaths).

The report said deaths attributed to the JeM increased by 69 percent due to the deadliest attack perpetrated in 2019. The suicide attack carried out on the Central Reserve Police Force convoy along the Srinagar-Jammu Highway in Lethpora, Pulwama, by the JeM was among the 20 most fatal terrorist attacks in 2019.

Global economic impact of terrorism estimated at $26.4 billion in 2019

“These estimates are considered highly conservative, as there are many items that are not included in the methodology due to the difficulty in obtaining globally comparable data, such as reduced tourism, business activity, production, and investment, in addition to counter-terrorism expenditure and government spending on securitisation,” the report said.

Afghanistan was also the worst hit by the economic cost of terrorism -almost 16.7 percent of its GDP.

In terms of region, Sub-Saharan Africa and South Asia reported the highest economic impact at $12.5 billion and $5.6 billion, respectively.

India was among the top 10 countries that recorded (16 percent) decrease in economic impact of terrorism in 2019 over 2018. While Sri Lanka recorded the largest increase at $954 million attributed to the multiple bombings in the island nation in 2019.
Tags: #Current Affairs #Global Terrorism Index #India #Terrorism #world
first published: Nov 27, 2020 10:05 pm