In 2014, Devendra Fadnavis announced a stop to tankers. In Marathawada, tankers were almost abolished.

Mumbai and the rest of Maharashtra – maybe even the rest of India – are in the grip of what people call the tanker-mafia. To understand this better, let’s focus on Mumbai. This is because Mumbai is a big city. It generates a great deal of money. It consumes a lot of water. And, numbers for water related to this city are available.

Rewind to 2014. Devendra Fadnavis became the chief minister of Maharashtra. He announced a stop to tankers. In Marathawada, tankers were almost abolished.

Today, it is back to the future. Almost 6,200 tankers – over 10 times their original number -- traverse the same regions from where they were abolished.

Fast forward to last fortnight when a 16-year-old carrom player was run over by a water tanker in Mumbai. Then, do a casual search on Google or Bing on water tanker and deaths, and you will be surprised to know the large number of deaths water tankers cause in Mumbai and all over India. Do a fact check. Stand atop a foot over bridge at any busy intersection in Mumbai. Look out for water tankers. Observe the manner in which they cut across traffic lanes, and sometimes even traffic signals, in Mumbai. The traffic cops, despite their hi-resolution cameras, turn a blind eye to these infractions.

The answer is simple. Tankers spell money. This is often in collusion with the authorities of the Municipal Corporation of Greater Mumbai (MCGM) and the police (the elected bodies are often silent conspirators as well).

It is not unusual to find relatives of state authorities and even politicians owning and running fleets of tanker trucks. Naturally, then, the police are urged not to delay tankers with inspections or prosecution notices because each tanker must complete anywhere between 10 and 40 trips each day. In cities like Mumbai, tankers run on all 365 days of the year because municipal authorities ensure that water does not reache houses and slums in adequate quantities, thus making them depend on the water tanker service. 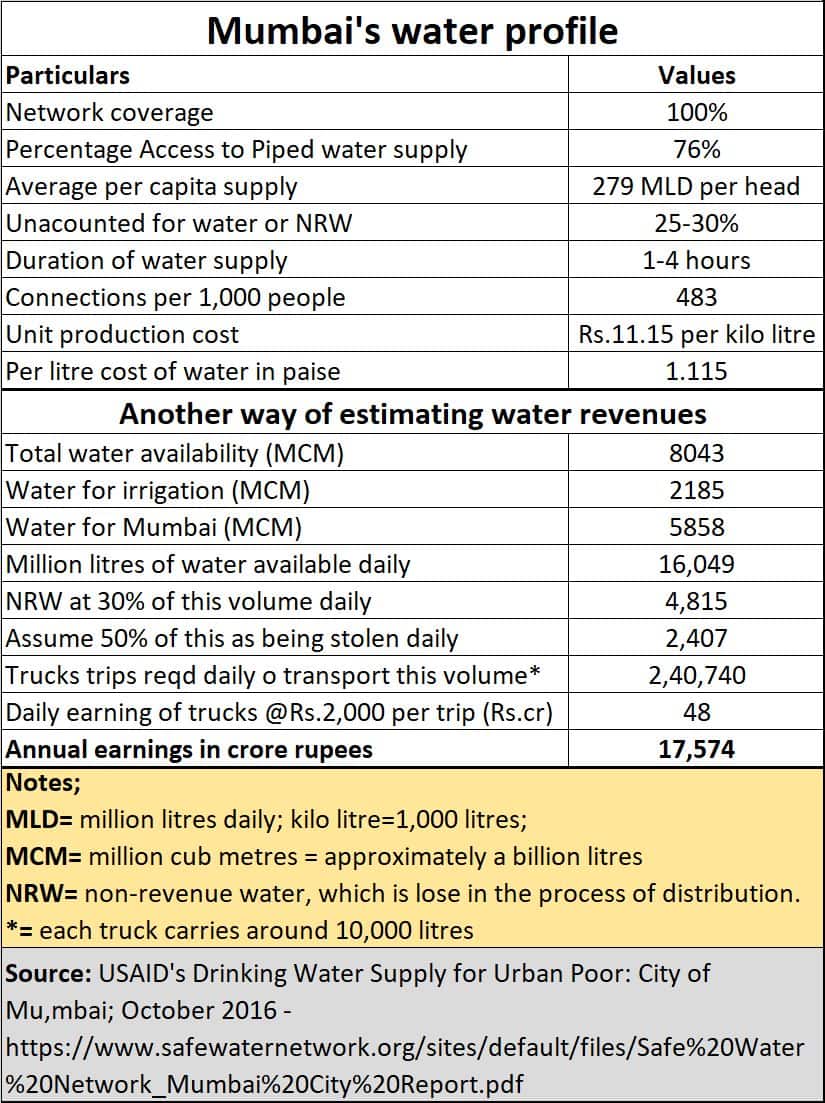 In Mumbai alone, the tanker business generates revenues of well over Rs.1,000 crore each year (see chart). This number is an understatement, as the second chart will show.

Ironically, the source of water for the tankers is often the municipality itself. When it comes to private business at the cost of the exchequer, the speed, efficiency and the coordination are amazingly efficient.

The bigger picture for Mumbai

Now, forget the simplistic picture. This is because Mumbai could be deploying a lot many more tankers and generating a lot more of unaccountable money each day.

That could explain why the MCGM staff ensures that adequate water does not reach houses and slums. And, the best proof of the diversion of water can be found in the huge number for non-revenue water (NRW or the water which disappears and cannot be accounted for because of either evaporation or distribution losses or even theft).

For this, we need to go to the table which gives us the total water available to Mumbai from its entire catchment area. According to a compilation by the USAID in October 2016 on pg 24, "The total surface water potential of MHA is estimated to be 10,439 million cubic meter (MCM) at 75% dependability (or depth) and 7.869 MCM at 90% dependability.” .

The table alongside has the first set of numbers drawn from this report.

The NRW is pegged in Mumbai at around 30 percent. The state government has set a target to bring this down to 15 percent. Even then, the NRW is quite high. The most efficient states have an NRW of not more than 5 percent.

What does the 15 percent additional NRW translate in to? For this, check out the figures in the table on Mumbai’s water profile. It becomes clear that Mumbai has access to around 8,043 MCM of water from its catchment areas and lakes (Vaitarna, Ulhas, Patalganga and Amba). Of this, around 2,185 MCM is earmarked for irrigation. That leaves the city with 5,858 MCM.

At 15 percent, the NRW accounts for around 2,407 million litres daily. That is enough water for 240,740 truck trips. Assuming the lowest charge that trucks charge per trip for delivering 10,000 litres of water (Rs.2,000), the trucks could be making as much as Rs.48 crore per day. That means annual earnings of Rs.17,574 crore.

Discount this number further the way you want, and still you end up with numbers that exceed around Rs.8,000 crore to Rs.10,000 crore. And, this is from Mumbai alone.

Now, thanks to the drought-like conditions, another 6,200 tankers have been pressed into service in the drought prone areas. Add to this the tankers that ply in other cities – Nagpur Pune, Nashik, Aurangabad and others. Then consider the numbers for other states as well.

It then becomes clear why the water tanker mafia becomes extremely important to the political and bureaucratic grease machinery that exists in India. It also partly explains why everyone loves a drought. There is so much more money to be made.

The next article shall talk about how the best plans for water irrigation, water conservation and water harvesting are frustrated by money-making lobbies in the state.