Contest Alert:Last day to win Amazon vouchers worth Rs 5000. Take the MCPRO Quiz today to grab yours!
you are here: HomeNewsBusiness

As Vistara becomes second Indian carrier to launch a non-stop international flight, after Air India, the debate over whether airlines with wide-body aircraft or low-cost carriers will be successful starts again.

After launching flights to London and Frankfurt, Vistara is cashing in on people wanting to travel non-stop, rather than on one- or two-stop flights. The joint venture between Tata Sons and Singapore Airlines has announced the launch of a once-a- week flight between Delhi and Haneda airport in Tokyo from June 6, using the Boeing 787-9 aircraft. It will offer business, premium economy and economy class seatings.

At the moment, Air India is the only Indian carrier which has 47 long-haul aircraft, and is offering non-stop flights under air bubbles to the US, Canada, Australia and other continents.

Among aviation circles, it is widely expected that people will like to travel to the US, Australia, Canada, Europe and Africa without waiting at intermediate destinations in the Gulf like Dubai, Doha and Abu Dhabi or European destinations like London, Paris and Frankfurt.

Seamless connectivity means airlines will have to make sure they have the aircraft that can fly long distances non-stop. Else, they would need what are called wide-body aircraft.

Why Air India, Vistara stand out

Among Indian carriers, Vistara is in a slightly better position as it has two Boeing 787-9 aircraft, which can do non-stop long-haul flights like its new flight to Tokyo.

Air India and Vistara are, however, exceptions as the Indian aviation market is dominated by low-cost carriers (LCCs). Their fleet largely consists of narrow-body aircraft like the various versions of the Boeing 737 or the Airbus A320.

These single-aisle aircraft, or narrow-body aircraft, are typically flown on routes within India or connect India with countries in South-East Asia like Singapore, Thailand and Malaysia or in South Asia like Nepal, Bhutan, Sri Lanka and Maldives  -- destinations within 4-5 hours of flying time.

For example, IndiGo has the Airbus A 320 New Engine Option (NEO) and A 321 NEO aircraft, which fly 6-7 hours non-stop or much further than the conventional versions of this variety, which normally fly up to a maximum of three hours non-stop.

However, even the NEOs cannot help IndiGo launch non-stop flights to, say America or Europe, for which it needs wide-body aircraft.

The jury is still out on what these new travel patterns will mean for low-cost carriers (LCCs) like IndiGo and SpiceJet. 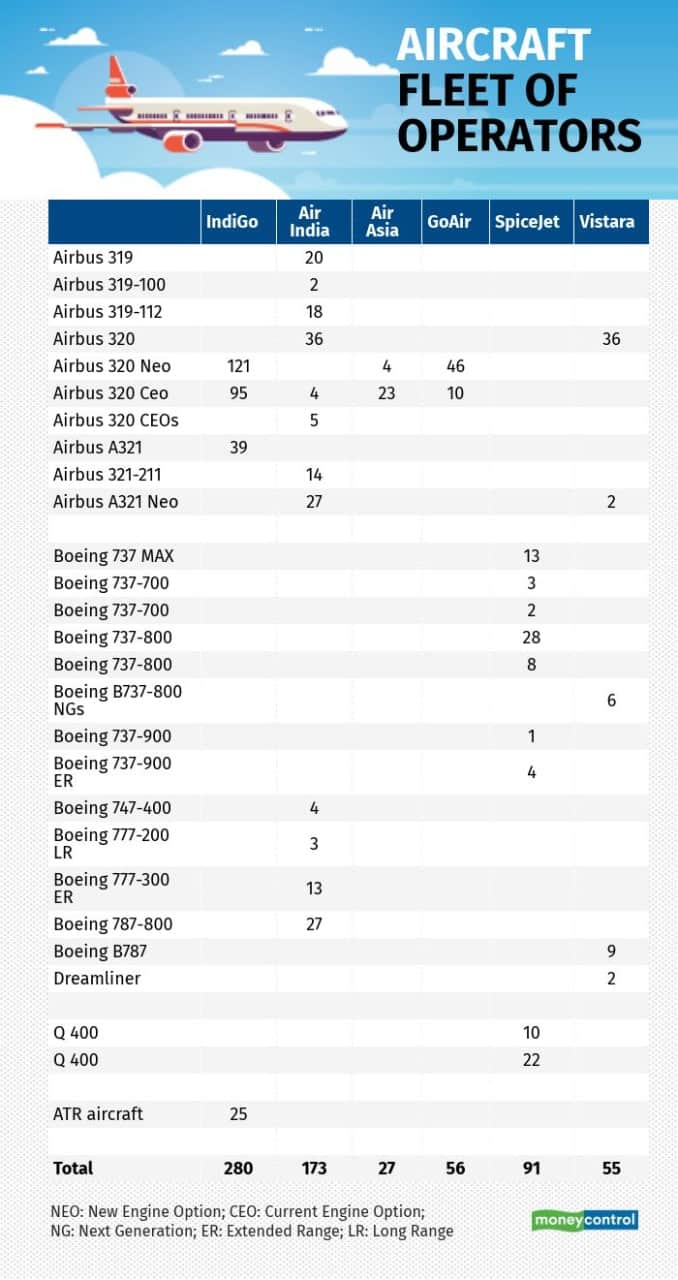 “There is no other country in the world where you have this (kind of) dominance of foreign carriers in international traffic. It is unique. If you take China, the US, Europe or all the big markets, you have a more balanced market share between local and international carriers,” says Rémi Maillard, President, Airbus India and Managing Director of South Asia region.

The time is right for Indian carriers to scale their operations and gain control of international networks out of India, he says.

It is estimated that only 36 per cent of international air traffic to India goes to Indian carriers, while over 60 per cent of the revenue generated on these routes goes into foreign hands.

Maillard also addresses the question of an Indian airline having to create two airlines---- one for long-haul, and one for narrow-body operations.

Maillard gives another reason why Indian carriers need to go in for wide-body aircraft when he points out that, historically, the yields are higher for long-haul wide-body operations than domestic operations.

“I see the move to long-haul to wide-body aircraft the way for Indian airlines to diversify and diversification means resilience. And as we have all learnt during COVID times, resilience is as important as growth and profit,” he says.

However, not all agree with this thinking. Jagannarayan Padmanabhan, Director & Practice Leader – Transport & Logistics, CRISIL Infrastructure Advisory, feels that the dominance of LCCs in India is not expected to change in the medium term. There is a greater uptick in regional routes even during pre-COVID times and this has accentuated in the last 12 months.

“The LCCs will prefer to maintain uniformity in their fleet, and considering the current circumstances of restrictive fares, upper cap on occupation and a general reluctance to travel, they feel that this concept (long haul) is still a few quarters away,” he says. “The impact of COVID will be felt by both business and non-buinsess travellers for the next six quarters. Till that time, there will be greater scrutiny of ticket prices and expenditure,” he points out.

Further, LCCs like to keep a single variety of aircraft fleet to keep costs down, and so have a single economy class cabin and do not provide in-flight entertainment or WiFi, all of which are generally considered a perquisite for a long-haul flight.

Gupte points out that the Indian domestic market is dominated by a large number of short routes with travel times of two hours or less. “This means that the no-frills approach of the LCCs is highly competitive in this environment. However, the comfort and amenities of the LCC model are less suited to the duration of long-haul flights,” he says.

Another case for low-cost carriers

Nripendra Singh, Industry Principal, Aerospace & Defense Practice, Frost & Sullivan, gives another perspective when he says that airlines work on schedules based on traffic seasonality, which is one of the key factors that determine their fleet type.

“When considering this, narrow-body aircraft are less risky than wide-body ones in the economics of operation. For viability of fleet selection, aside from passenger traffic, airlines also consider factors such as the availability of slots at an airport, regulator policies, and the airport's capacity to serve wide-body aircraft,” he says.

Singh is also of the view that the current state of aviation in India may not allow the big LCCs to explore wide-body operations. “But opportunities may arise, post 2025, once passenger confidence in air travel returns to the 2019 levels, and there is full recovery,” he adds.

Considering India's aviation potential, Lewis Burroughs, Head of Aviation, India, ICF, points out that when you think of the most successful LCCs in the world (Ryanair, Southwest, easyJet), they are all very lean businesses with simple fleets.

“This helps maintenance, employee and other operating costs down, which enables them to operate on low fares. LCCs transiting to widebodies (Norwegian, AirAsia X) don't tend to have a long history of success. So, there are reasons to be skeptical about the benefits,” he says.

Burroughs adds that while long-haul travel will recover, it is expected to take much longer than domestic or short-haul sectors. “The investments in widebodies at a time when very few people are travelling, and even fewer travel long-haul don't seem to align with growing the fleet in that direction. That being said, airlines which do take the risk, will benefit from competitive lease rates as current wide-body operators return aircraft and delay taking on new deliveries,” he says.

This is perhaps the thinking that Vistara is following. Of course, who will be more successful – Vistara with its forward-thinking approach or LCCs with their tried and tested formula – needs to be seen.
Ashwini Phadnis Senior journalist based in New Delhi
Tags: #Air India #aviation #Boeing #India Aviation #Vistara
first published: May 13, 2021 05:28 pm