No year has seen a contrast as stark as the pandemic year when it comes to IT hiring. TCS, Infosys and Wipro have gone from a net decline of 9,000 in hiring at the start of FY21 to a record addition of 40,000 employees for the quarter that went by amid soaring demand and rising attrition. All this in a span of one year.

As Wipro’s chairman Rishad Premji said in his letter to shareholders, with technology at the forefront of economic recovery and the shift to digital, demand will far outstrip the supply. Indian IT firms are clearly looking to address this issue, by stepping up hiring and doling out incentives.

Hiring in top IT firms jumped to over 40,000 for the quarter ending June 30, 2021 as the demand for talent is on the rise as companies continue to sign large deals. Infosys signed $2.6 billion in deal wins and Wipro signed eight large deals with a total contract value of around $715 million. TCS won $8.1 billion in deals in the quarter.

To cater to this growing demand, IT majors made record hiring in the June quarter.

TCS added over 20,000 employees, its highest addition in a single quarter, taking the total employees to over 5 lakh.

Infosys added 8,300 and Wipro 12,000, which is the highest in a decade. Wipro now has more than 2 lakh employees. These companies also have robust hiring plans in place for both lateral and fresh entries in the coming quarters.

While TCS will hire 40,000 freshers in FY22, Infosys and Wipro are upping their fresher hiring this year. Infosys will add 35,000 freshers in the year, up from 26,000 it had shared earlier. Wipro said it will hire 9,000 from campuses in FY22, adding 33 percent more in the year. It will also roll out 30,000 offer letters to campus hires in the later part of this fiscal, who will join Wipro in FY23.

This is in a bid to combat growing attrition, one of the biggest challenges the companies face. The attrition rate has been growing over the last couple of quarters for IT firms.

While TCS’ attrition stood at 8.6 percent, for Infosys and Wipro, the spike has been sharp at 13.9 percent and 15.5 percent, respectively, from 10.9 percent and 12.1 percent in the previous quarters. Talent is one of the biggest challenges facing these IT players. 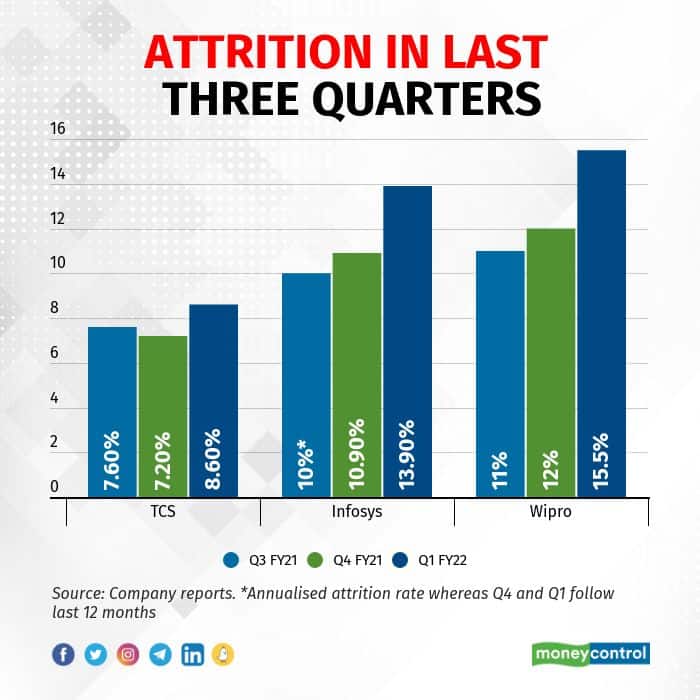 Thierry Delaporte, CEO, Wipro, in an interaction with Moneycontrol, said, “This is a challenge not for us, but for the entire industry. I have not yet seen a company that does not have attrition that is not going up.

“There is very high demand and even our clients are exposed to attrition on their side. So these numbers are a reflection of the fact that we are in a different world, where there is a lot more fluidity of the labor market, where you are one click away from responding favorably to another opportunity. So that's the world we are in. And so we need to adapt to that and we need to be able to respond and connect.”

That is also one of the reasons why companies are doubling down on freshers and are offering incentives.

UB Pravin Rao, COO, Infosys during the earnings call on July 14 said rising attrition was a concern and the company had gone for multiple employee interventions, including promotions for retaining the workforce.