2021: The year venture debt took off in India

The emerging asset class seems to have had a breakout year in 2021. Will the next year be any different?

Indian startups raised about Rs 4,500 crore ($600 million) of venture debt this year, more than double the previous high for an asset class which is seen as the new kid on the block, as companies went on a shopping spree and investors raised larger funds.

Venture debt had clocked its previous record in 2019 when startups raised about Rs 2,100 crore ($300 million).

This year Alteria Capital lent about Rs 1,500 crore to companies such as Rebel Foods and Infra.Market, while Trifecta Capital, InnoVen Capital India and Stride Ventures accounted for the remaining sum worth Rs 3,000 crore. In fact the last three are currently raising funds, indicating more bullishness.

“The target market for debt has increased sharply. I have been saying each year that it is becoming more and more mainstream but this year it has become a matter of fact and an integral part of fundraises,” said Vinod Murali, managing partner at Alteria. Internet startups usually raise venture debt to avoid equity dilution, stretch their runway before a fundraise and manage working capital/cash flow. This year, however, they used the asset class for shopping around. For example, ecommerce roll-ups, as part of which a holding company acquires fast-growing online sellers under the so-called Thrasio model, fuelled venture debt.

Larger startups also used the asset class to acquire companies outside their sectors for regulatory arbitrage and expanding into a new market. For instance, BharatPe acquired the distressed PMC Bank in partnership with Centrum Finance.

“The awareness of founders to use inorganic opportunities to help grow valuation two to three times has increased a lot. And that's one reason why venture debt has been popular this year,” said Ishpreet Gandhi, managing partner at Stride. 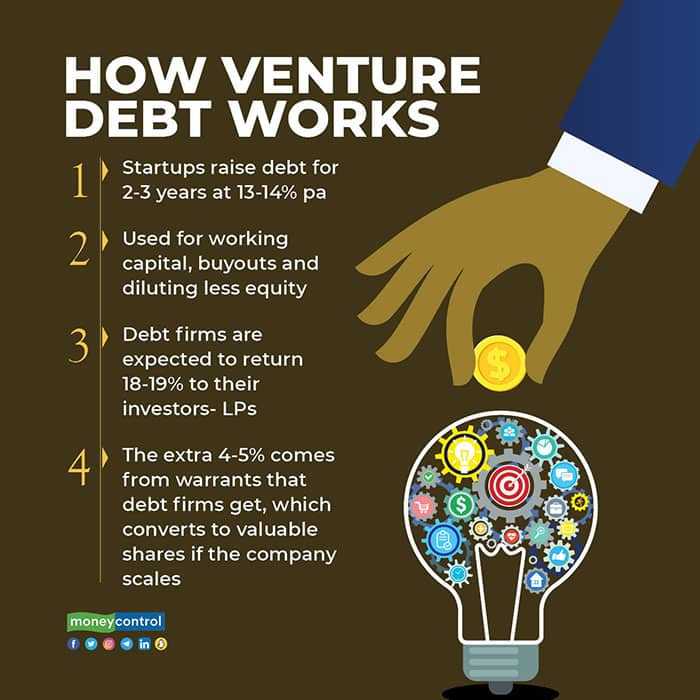 Venture debt firms lend at an interest rate of 13-14% and expect a payback period of two to three years. They also get warrants in companies which convert to shares at a later date. These shares, which can be tremendously valuable if the company scales, set apart venture debt firms from ordinary lenders. In some cases where companies are reluctant to give out warrants, investors charge interest rates of 20% or higher.

Investors in venture debt firms – high net worth individuals, family offices and institutions – expect an annual return of 17-18% pre-tax post-expenses, a benchmark the asset class is comfortably crossing, investors said. Many have also started seeking exits from their hottest portfolio companies whose share prices have gone up 8-10 times in barely two years.

“Venture debt funds are looking really good today but we have to tell our LPs (limited partners or investors) that 17-18% is the expected return. Anything beyond that is a bonus, and not expected,” Gandhi said.

While startups raised over $35 billion in equity capital this year, venture debt is barely 2% of that, but investors still see rising adoption as a positive sign. In the US, venture debt is about 10-12% of equity, also because banks and other lenders give out more freely to startups, something absent in India.

After a record 2021, some feel a few companies will default or be distressed soon. “For 2022, investors and companies should both stay paranoid. Don't have situations where you are left at the mercy of the markets,” Murali said.

"When a company goes through difficulty, how you engage with the founders will decide whether there is a loss or not. The company has to be comfortable with the approach. You can't go hammer and tongs at them as it needs an empathetic approach,” he added.

While the amount of venture debt raised largely correlates to venture equity, investors see opportunity even if equity funding falls below current levels.

“Even if there is some moderation in equity funding, I’m expecting the (debt) market size to grow next year as many well-capitalised companies have a capacity and use case for debt. Follow-on deals from our existing portfolio companies is the bread and better of venture debt,” said Ashish Sharma, CEO of Temasek-owned InnoVen Capital India.

“In 2022 I think everyone will be more selective as there are a lot of opportunities to deploy and capital is limited,” he added.