- The stock can be accumulated on dips

Raymond reported a decent Q1 performance. While the company’s branded apparel and shirting fabric segments seem to be doing fairly well, it’s the branded suiting fabric division that will have to meaningfully contribute to overall growth and profitability.

- Sales growth across most segments.

- Operating expenses, as a percentage of sales, declined YoY. This led to an uptick in EBITDA margin.

- Depreciation and interest costs rose significantly YoY due to Ind AS 116 implementation. As a result, bottom line was negative. 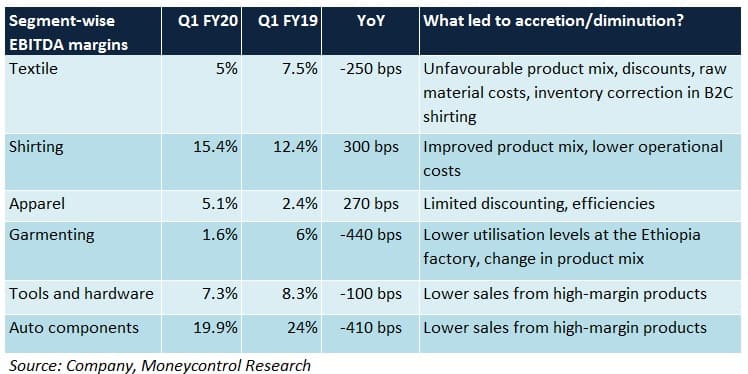 As of June 30, Raymond's pan-India store count across all formats stood at 1,458 (spanning a total retail space of 2.37 million square feet). Going forward, the management has prioritised tier 4/5/6 cities and towns to achieve the next leg of growth.

Most of the outlets in such regions would be under the franchise route since a local partner would have a better understanding of consumers' preferences. Ceremonial wear and khadi designs, the two product variants that have been introduced in recent quarters, are likely to gain traction on the back of store openings and higher advertisement spends.

Within the existing segments (suiting, apparel, shirting) too, the portfolio will be refreshed at regular intervals. Possibilities of brand associations with events will be explored periodically to enhance recall.

Raymond has been entering partnerships with tailors to boost fabric sales – suiting and shirting. As of June-end, the company is associated with 54 tailoring hubs across India. The conversion capacity (i.e. processing of fabrics into garments) is nearly 2 million metres per annum.

Of late, prices of cotton, polyester and wool, the main raw materials used by Raymond, have been softening. This should ease the pressure on gross margin, especially in the branded textile segment (comprising suiting fabric and B2C shirting fabric).

Going forward, top line growth in this segment (target for FY20 – mid to high single digit) would be achieved through a blend of high-value and economy products. In case of the latter, emphasis will be laid on foraying into new and relatively under-penetrated geographies.

In case of B2C shirting, inventory correction, which was initiated in Q4 FY19, is expected to conclude by the early days of H2 FY20. This may reduce strain on the margins.

To ease liquidity concerns (on trade as well as supply side), the company is exploring the possibility of channel financing in consultation with banks, too.

Parx, Park Avenue and Colorplus have seen healthy growth in the past. In the long run, store additions will continue to be a priority given the growing preference for brands. Most of these new COCO (company owned, company operated) outlets may be small to medium-sized in nature to keep rentals low.

While multi-brand outlets are pivotal to the success of this segment, launching new exclusive brand outlets and refurbishing existing ones would also be high on the agenda.

Raymond’s greenfield linen fabric factory at Amravati, with a capacity of four million metre per annum, was commissioned in Q4 FY18. Operations at this facility have not been facing any disruption. Regular product innovation is one of the key focus areas in this segment.

In recent times, political uncertainty had a major bearing on the utilisation levels at its Ethiopian factory, which contributes 18-20 percent to the revenue of this segment. Success of this segment will predominantly depend on how and when this scenario is resolved. The export order book for April-December 2019 is full at the moment.

Operational efficiencies and a better product mix would be prioritised to fetch higher margins.

Sales will continue to go through a rough patch because of a series of adverse scenarios plaguing the sector at this point.

In spite of an improved distribution network, a downtrend in rural demand will continue to hurt growth strategies. However, benign input prices may aid gross margin expansion.

This vertical has seen a good response from property seekers. Within four  months of the launch, Raymond received 581 bookings (amounting to Rs 612 crore) for 1,050 units in four towers. Construction is as per schedule.

In light of the sub-par consumption sentiment, top line traction may be subdued during the remainder of FY20.

In the case of Raymond, the effect may perhaps be more pronounced since most of its products, being premium in nature, would be hit by the cutback in discretionary spending by consumers.

Dealers in the wholesale and retail channels have also been facing a cash crunch, which only aggravates the problem.

In branded apparel, margins in the near future are anticipated to come under pressure. This can be attributed to extended end-of-season-sale phases, higher contribution from value-priced products and an increase in overheads.

Starting September 2019, with seasonality kicking in, the company should see a visible improvement in its numbers, especially from a sequential (quarter-on-quarter) perspective. It remains to be seen as to how the negative free cash flows and extended working capital cycles (as seen in Q1) are managed amid the slowdown.

Like all other consumption names, Raymond has not been immune to disruption. In the past 6 months, the stock, after witnessing a bit of a recovery (from February 7 to May 27), has been in a price correction mode. It trades at 16.9 times its FY21 projected earnings. We advise investors to accumulate the stock on downsides. 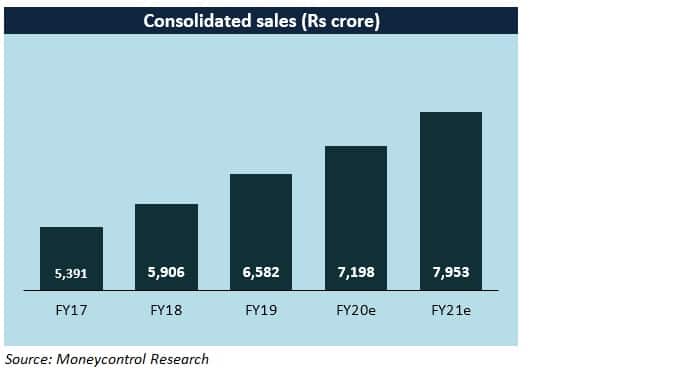