Should you buy into the smart rally in value funds?

Value funds are back in the reckoning. With an average 27 per cent returns for the three months ended June 2020, this category of equity funds has shot to the limelight for keeping pace with the bellwether Nifty 50 after a long period of lag.

The category also stands out for outperforming other categories such as large, multi and mid-cap funds in this three-month period. What explains the upswing, and should you jump in and ride this move?

Let’s first look at the portfolio of value and contra funds to know how they differed from the Nifty 50. We took the 17 value funds and at their average exposure to sectors. They stacked up as follows when compared with the Nifty.

Some of the top returning sectors in the past three months were auto, telecom and healthcare. And, as can be seen, value funds had significantly higher exposure to these sectors than the benchmark index. As a result, some of the funds in the value category, such as ICICI Value Discovery, IDFC Sterling Value, Invesco India Contra, L&T India Value, Tata Equity P/E and Union India Discovery managed to deliver higher returns than the Nifty over the past three months.

Now, it’s not just a question of playing sector underweight and overweight. Even where value funds did go underweight in certain sectors, they held stocks that were undervalued in such segments. As a result, the underweight sectors still delivered better. Let’s take the data below. It has returns of some of the top holdings (by average exposure) of value and contra funds. 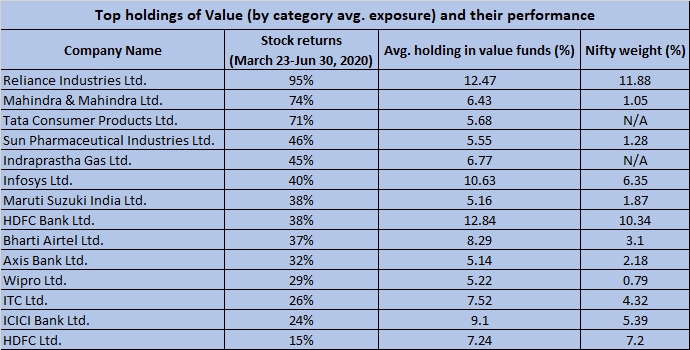 Fund and Nifty weights are as of May 31, 2020 (data for June is not available for funds yet). Returns are from March lows.

The data above will tell you that while value funds were underweight in sectors such as financial services, they still held overweight positions in select stocks such as HDFC Bank and Axis Bank, thus propping their portfolio returns.

Similarly, in segments such as consumer goods, despite having an underweight position compared with the index, holding stocks such as Tata Consumer Products (held by 6 out of the 17 funds) delivered massive returns, pushing funds such as Indiabulls Value and L&T India Value. Others such as IDFC Sterling Value, which always treaded well into the mid and small cap space, held stocks outside the bellwether index that delivered.

Not for all seasons

If the above data is encouraging you to move to value funds, there are some facts you need to know about them.

-Value funds can underperform for prolonged periods of time and by a significant margin, as seen in 2018 and 2019.

-Value funds typically bounce back after a correction, as the market picks all the stocks that were already in deep value before the correction. Also, a new set of stocks can be picked in a new rally, thus generating interest in undervalued stocks.

-Value funds, contrary to what is usually thought, may not always contain declines well. After a strong rally like the one seen in 2007, these funds fell more in 2008. This was the case in the 2011 fall as well. This has to do with many of the value funds holding growth stocks, as the seeming value in their holdings quickly move to growth territory after a steep rally. 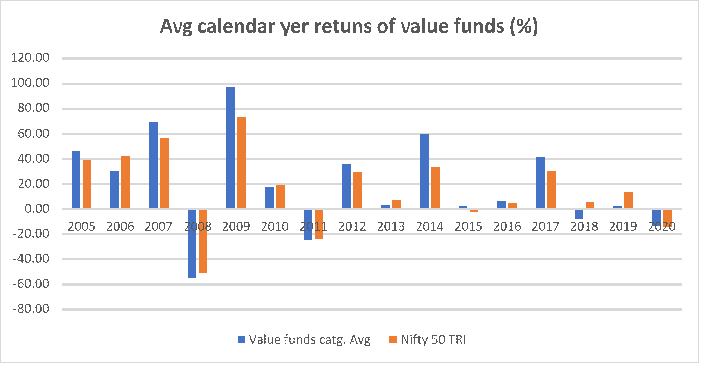 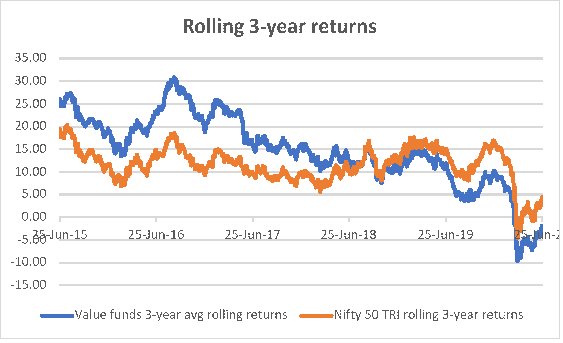 Even the five-year returns of value funds are still close to two percentage points lower than the Nifty 50 in the past one year. This is typically when retail investors tend to lose interest and make an exit and probably see a rally later (like the present one). Hence, it is vital to have a very long-term perspective (at least seven years if one goes by the probability of this category, to beat the index by a good margin) to enter this category of funds. Let the current spurt alone not be a reason for your entry. Have a clear time frame.
(The writer is Co-founder, PrimeInvestor)