One year of Ayushman Bharat: Well begun, but only half done

The Prime Minister Jan Arogya Yojana (PM-JAY) completed one year this September. PM-JAY is that part of Ayushman Bharat which deals with hospitalization. Too much scepticism has revolved around the PM-JAY since its announcement. Naturally so. The scheme’s aim is to provide cashless hospitalization to 50 crore Indians to the extent of Rs 5 lakh per family. All this at no cost to the individual. PM-JAY’s target needs to be seen in the context of the size of previous government sponsored schemes. In 2017-18, insurers covered around 36 Crore individuals across all government schemes for health insurance. In a scheme of such magnitude, a lot can go wrong. Just the thought of the potential missteps can give cold feet to several administrators. With this Government’s determination, the scheme has taken off. The degree of success now depends on the devotion of the implementation team, and its ability to create a positive feedback loop to iterate and learn. This makes a case for a holistic reflection across multiple dimensions.

Adoption and enrolment are the first signs to assess. Health is a state subject, so adoption of this central scheme was voluntary. For the states to sign-up, political and technology challenges had to be overcome. Also, there were several ongoing state-sponsored schemes, which would have to be subsumed within PM-JAY to avoid cannibalization. Thirty-two states and UTs (union territories) signed up for the scheme in the first year. This is an excellent beginning. However, enrolment stands at around 10 Crore, one-fifth of the overall target. This is primarily driven by slow enrolment in larger states – Gujarat, Uttar Pradesh, and Maharashtra. Such states have covered only 35 per cent of the eligible families. 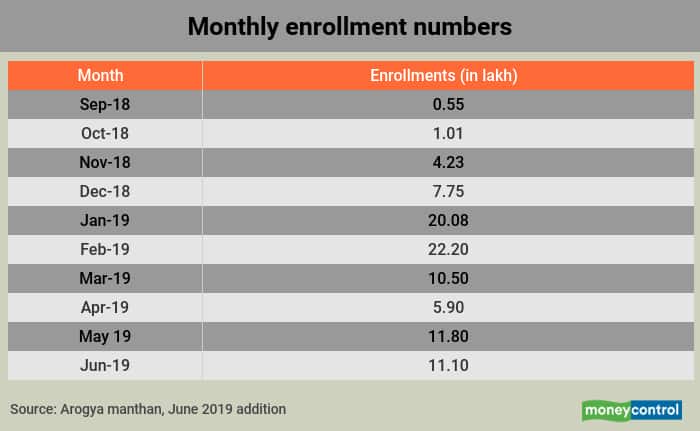 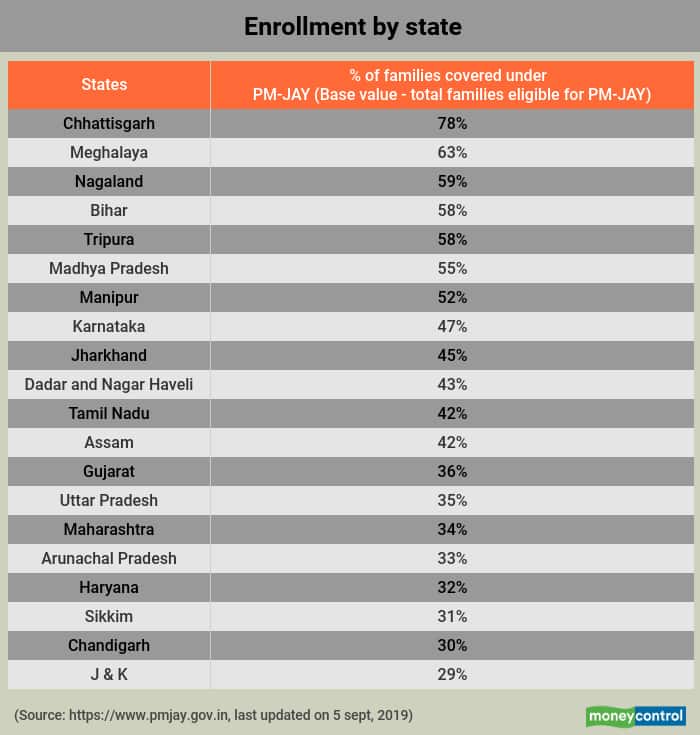 Economic sustainability of the scheme was always a concern. Insurance bids in some states went below Rs 800. This is way lower than private health insurance costs for a coverage of Rs 5 lakhs. In the first year, the total hospitalization expense was Rs 7,490 Crore. Considering that 10.3 Crore individuals enrolled, the average spend comes to Rs 727 per person. However, this has to be adjusted upwards for people that joined during the year, and did not get a full year’s coverage. Also, it is argued that the scheme’s awareness level is low. Many covered individuals do not even utilize the benefits. For the scheme to be sustainable, the intended beneficiary should utilize the scheme, and the premium should be able to cover such expenditure.

Hospital capacity was questioned. Package rates were pegged considerably lower than prevalent private sector rates. So, it was suspected that private sector hospitals may not participate. The scheme was able to enrol 18,236 hospitals. Of these, 9,665 were private hospitals. In fact, of all the treatments served, 62 per cent of the expenditure was incurred in private hospitals. Around 46.5 lakh individuals availed treatment, with an average hospitalization cost of Rs 16,107. The average spend in a private sector hospital for the scheme was higher, at around Rs 18,801. However, this is still less than the average hospitalization cost for private health insurance. But, the scheme has left a few incentives to encourage private hospital participation. Hospitals with full NABH accreditation can get 15 per cent higher package rates. Unfortunately, there are only 310 such hospitals. So, while there is a case for the scheme to increase its package rates, hospitals also need to enhance the quality of clinical outcomes.

Insurers have played a limited role in the scheme thus far. Seventeen states & UTs have left insurers completely out of the scheme’s implementation. Six have leveraged insurers in a mixed model. Only nine have adopted an insured model. This is a lose-lose situation for both. Managing a fund, dealing with hospitals, and servicing claims are core strengths of an insurer. A common implementation structure would help transfer of learning from one state to another. On their part, insurers have a big agenda. Enrolment drives and fraud detection are areas where the scheme requires a boost. Insurers need to show more traction in these areas. In nine regions, where insurers had full implementation responsibility, enrolments ranged between 17 per cent and 63 per cent of the eligible set. The state with the highest attachment of 78 per cent was Chhattisgarh, which used a mixed model. Attachment in other mixed mode regions range between 34 per cent and 45 per cent. Insurers need to drive the scheme to reap other corollary benefits. The least not being the leverage of data from the scheme to optimize their private health plans, and significantly greater negotiation power with hospitals.

With the depth of digitized data available with the scheme, and with 91 per cent of the e-cards linked to the Aadhaar, analysis can be potent. Useful implications could be drawn for public health programs, capacity building and public awareness initiatives. For example, a report published on the usage of scheme for hysterectomy identified several abnormal patterns. The scheme is also regularly identifying fraudulent hospitals, and naming them. We have just scratched the surface, but the intent and mind-set clearly are to use the power of data for public good.

They say well begun is half done. A scheme of such magnitude would have multiple facets and implications on a range of stakeholders. A PM-JAY report states that the NHA had less than six months to offer an IT solution to the states for the implementation of the scheme. For a machinery put in such haste, it is no mean feat that in an annual report published before October 1, data up to September 22 was given. We have a long path ahead to achieve universal health coverage. Until then, we have to continue investing in the health and strength of the scheme.