You need a mix of fund strategies in your portfolio. This will help you maximise your ability to earn returns in different market cycles

A one-year loss of 1.9 percent. A one-year gain of 26 percent. That’s not the difference between returns of the stock market in different years. That’s the difference between returns of two small-cap funds in the same period. You may have noticed such a trend yourself, especially as the top performers appear far ahead of the others in the category.

While the divergence in the performance of funds within a category reduced in 2018 and 2019, post the new SEBI categories, the divergence has grown again over the past few months. This divergence is stark in the mid-cap category, where the standard deviation (suggesting how fund returns swing from their averages) in returns in the past three months is well above the average it normally is. In small-cap funds, the deviations are lower, but still above average. Only in the large-cap space has the divergence in fund returns remained steady.

Consider the mid-cap category. The highest current one-year return is at 34.1 percent, clocked by PGIM India Midcap Opportunities. The lowest in the category is a loss of 3 percent, suffered by Motilal Oswal Midcap 30. A similar story plays out in the small-cap space, where the top returner of BOI Axa Small Cap is miles ahead of Franklin India Smaller Companies. 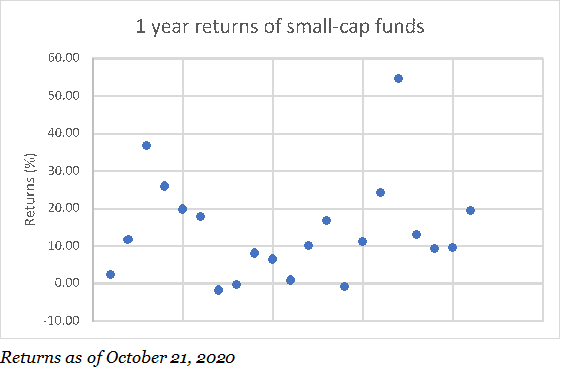 On this count, the mid-cap category clocked a deviation of 7.5 percent, considering the rolling one-year returns from August to date. On an average, funds deviated from each other by an average 5.1 percent since January 2018. In the small-cap category, the standard deviation of one-year returns has jumped to 10.5 percent against the average of 7.9 percent it had been earlier.

While this divergence is not stark in multi-caps, (including all categories that invest across market capitalisations, such as focused and value), it is on the rise. A good many focused funds, for example, such as those from BNP Paribas, Mirae Asset, Kotak and L&T AMCs are much better in returns compared to some of the more diversified multi-cap funds. Among value funds, while most are still floundering, those such as Invesco India Contra and ICICI Pru Value Discovery have posted strong one-year returns.

So, what explains the rising divergence? For one, market behavior since March 2020 has been a rollercoaster. Second, the rapid crash and stunning rise came about in a matter of months, and even as companies saw revenues and earnings hit by the lockdown, and with the longer-term impact on earnings still cloudy. Third, fund strategies and portfolios. Some funds tend to do much better than others at containing downsides – lower falls mean that a fund can recover much faster and can do so even if there is a smaller market upswing.

For example, mid-cap and small-cap funds took higher cash calls or increased large-cap exposure and therefore contained the market fall better. Similarly, many funds that are multi-cap by nature have been very firmly on the large-cap side.

At the other end, there are aggressive funds that can slip very sharply during market corrections, but use soaring returns during upswings to compensate. Funds like these come to the fore during rallies.

The quick and steep moves that markets have gone through since the start of this year have amplified this aspect, resulting in wide differences between returns. The two prior years were mostly either downward or flat.

From May to date, for instance, small cap funds have gained anywhere between 24.7 percent and 42.1 percent. Mid-cap funds gained between 17 percent and 37.6 percent. During the decline from January to May, the smallest loss a small-cap fund clocked was 10 percent, even as the Nifty Small-cap 250 tanked 36.5 percent. The biggest loss was 33 percent. The same holds true in mid-cap funds as well.

The return divergence in categories happens in some market phases and teaches us the following:

One, fund returns will change based on markets. Return divergence between funds in the same category were also similarly high towards the end of 2017. This period was the end of the 2014-2017 bull market, and funds were handling these markets in a variety of ways. Those that cut back on mid-cap and small-cap exposures were well below those that were more aggressive. Therefore, when looking at top performers, don’t be swayed by current performance. Know that markets play a role and that performance needs to be seen across market cycles and keep the present market cycle in perspective.

Two, short-term market movements can change the picture. Differences in fund strategies, and in volatile markets like the current one, will see different funds rank at the top of the charts. The table below shows the top funds in each category at two different points in the past year, based on one-year returns. Long-term returns and performance over different periods better showcase a fund’s ability to deliver than simple one-year, three-year, or five-year returns. 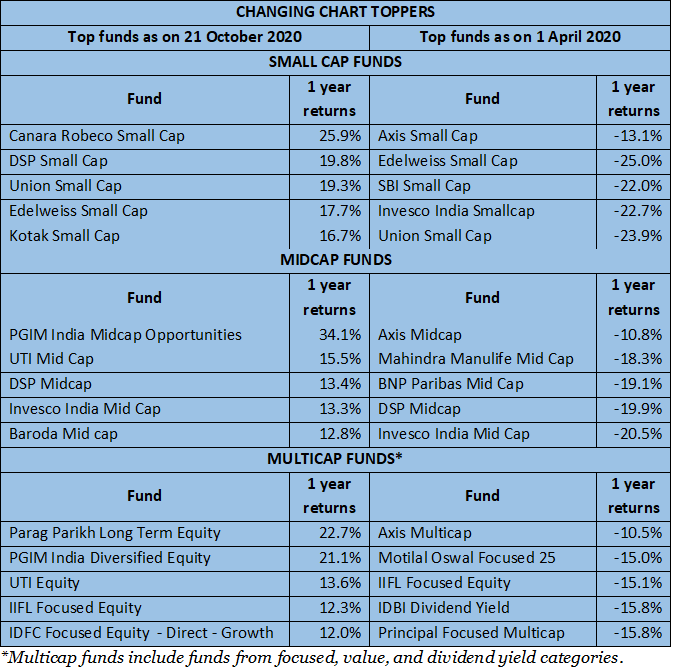 Three, a fund’s strategy is important to know how it can perform, and whether it suits your portfolio, time-frame, and risk appetite. Funds that thrive on capturing upsides well, but slip on correcting markets do not suit those with more moderate risk appetites but will be useful for high-risk investors.

Four, you need a mix of fund strategies in your portfolio. Doing so will help you maximise your ability to earn returns in different market cycles. You’re better able to spread your risk and protect your portfolio from big performance swings.
(The writer is Co-founder, PrimeInvestor)
Tags: #invest #midcap funds #Mutual Funds #smallcap funds
first published: Oct 29, 2020 10:58 am