New client addition slows down at top 4 Indian IT firms

TCS, Infosys, Wipro and HCL added 60 clients in the $1 million plus revenue band in Q1FY23, down from 91 clients added in the same band in Q1FY22

Net new client addition across revenue bands for the top four Indian IT companies — Tata Consultancy Services (TCS), Infosys, Wipro, and HCL Technologies — remained tepid in the first quarter of FY23 ended June 30, 2022, with the exception of the $1 million plus revenue category.

Sequentially, client addition in Q1FY23 in the $1 million plus revenue band grew to 60 from just 42 clients added in Q4FY22 across the four firms. However, it dropped significantly on a year-on-year basis, when compared to the 91 clients added in the same quarter last fiscal, according to data accessed from CareEdge Research. In a YoY comparison, client addition dropped across revenue bands.

“The slowdown in client addition is an impact of higher base effect on account of a sudden post-pandemic ramp-up in Q1FY22. However, client additions gathered pace in Q1FY23 vs. Q4FY22 as Q4s are generally weak from a seasonality perspective. The growth has mostly been broad-based across verticals. BFSI continues to have the largest share and is the fastest growing segment,” Tushar Shah, Co-CEO, CareEdge Advisory & Research, said.

During Q1FY23, the mix of high-value client additions demonstrated a very strong trend. For instance, in $10 million plus bucket, 21 clients were added in Q1FY23, compared to 22 clients added in the whole of FY21, which was marred by the Covid-19 pandemic. 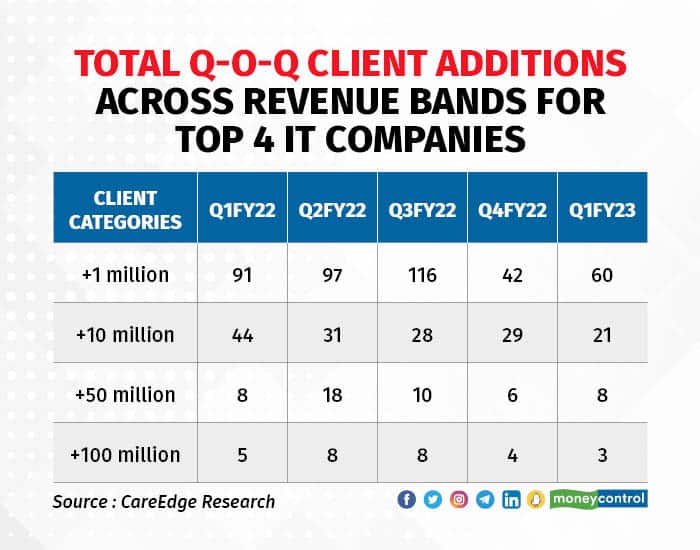 While most of these companies said that deal wins have been in line with expectations and that they have a visibility for Q2, there has been caution about what happens beyond that, especially in calendar year 2024, given ongoing macro uncertainties, fear of impending recession and cross-currency headwinds.

During the earnings announcement for Q1FY23, TCS CEO Rajesh Gopinathan said that, “Projects that are currently going on, the pipeline conversion, all of that indicates a very steady demand environment. We are also constantly polling to see whether there are any early indications of softening and as of now there is nothing into the middle of the year.”

“On deal wins, it seems to kind of be cooling off and seems to indicate probably that there is a demand issue developing. When you discuss issues regarding this with the management, they generally say that as of now, things are okay,” Girish Pai, Head of Research at Nirmal Bang Institutional Equities, had said in an earlier interaction with Moneycontrol.
Debangana Ghosh
Tags: #CareEdge Research #HCL Technologies #Infosys #Nirmal Bang Institutional Equities #Q1 IT Results #Rajesh Gopinathan #Tata Consultancy Services #TCS #Tushar Shah #Wipro
first published: Jul 28, 2022 07:45 pm