Munjal Showa and FIEM Industries: Play on growth in two-wheelers

The auto sector has been on a strong up move for more than a year now, having weathered storms like demonetization, transition to BS-IV emission norms, and the implementation of GST.

The sector continues to cruise on, with the two-wheeler segment performing particularly well in recent times. It has registered a compounded annual growth rate of 7.9 percent between FY13 and FY18, as against the industry's growth rate of 7 percent over the same period.

In fact, two-wheelers registered a year-on-year growth of 14.8 percent in FY18. This was the first instance of double-digit growth in the segment after a long time.

The growth has been fuelled primarily by a good monsoon and the resultant economic recovery has lifted rural consumer sentiment. Given the current impetus of rural economy, and expectation of a normal monsoon, the two-wheeler segment should continue to have a strong run.

Against this backdrop, we revisited the financial performance of two auto ancillary players - FIEM Industries (FIEM) and Munjal Showa (Munjal), both of whose fortunes are linked to the two-wheeler segment.

FIEM is one of the leading manufacturers of automotive lighting solutions in the country, being the first one to introduce LED lights for two-wheelers.

The company also manufactures rear view mirrors, sheet metal parts and plastic components. It has ventured into LED luminaries for indoor and outdoor applications, and Integrated Passenger Information system (IPIS) for railways and buses, as well. 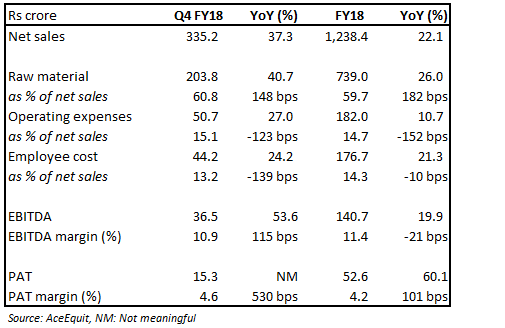 Riding well on the growth coming in from the two-wheeler segment, the company posted a 37.3 percent year-on-year growth in sales, led by a 35.3 percent growth in the automotive segment.

This was driven by 32.5 percent and 28.6 percent rises in volumes from key clients Honda Motorcycle and Scooter India and TVS Motor, respectively.

Interestingly, the LED luminaries business earned a revenue of Rs 1.1 crore this year, which was in itself a positive because it had reported negative sales of Rs 1.1 crore in FY17, because of a return of goods worth Rs 2.3 crore in the March quarter last year.

Despite the rise in raw material (RM) prices, the company reported an on-year expansion of 115 bps in its earnings before interest, tax, depreciation and amortisation (EBITDA) margin in FY18.

This was mainly driven by higher operating leverage and efforts to reduce cost undertaken by FIEM. The company reported a net profit of Rs 15.3 crore in FY18, compared to a loss of Rs 1.8 crore in the previous year.

The company was formed out of a collaboration between Hero Group and Japan's Showa Corporation. It manufactures shock absorbers such as front fork and front/rear cushion for two-wheelers, and struts for passenger cars, with most of its revenue coming from the two- wheeler segment. In the quarter gone by, the company's net revenue from operations grew 17.4 percent on year on the back of strong volume growth coming in from its customer Hero MotoCorp.

On the profitability front, the company posted a 232-bps YoY expansion in EBITDA margin, which was due to a fall in raw material prices and operating expenses. Net profit grew 131.4 percent, with net profit margin expanding 337 bps.

Within two-wheelers, the scooter segment has been growing faster than the motorcycle segment. The former grew 20 percent on year in FY18, while the latter only grew 14 percent.

Fiem is well placed to take advantage of the high growth coming in from the scooter segment, as its key clients are some of the strongest players there. Honda Motorcycle and Scooter India is its largest client, accounting for around 45 percent of its revenue, while TVS Motor brings in 24 percent.

From Munjal's perspective, two-wheeler manufactures Hero MotoCorp, Honda and Yamaha contribute to around 85 percent of its revenues, while the remaining comes from the passenger vehicles segment where one of its key clients is Maruti Suzuki.

Hero is the formidable leader in the two-wheeler segment, clocking strong volume growth because of its strong penetration in rural India. Honda, on the other hand, is a leader in the high-growth scooter segment and is well placed to capture the growth coming in from these customers.

The increasing adoption of LEDs by original equipment manufacturers (OEMs) would offer great opportunities for FIEM, as LEDs require technical expertise and the company's in-house research and development supports it.

The wider adoption of LEDs unlocks huge potential for the company both in terms of sales growth and margin expansion.

Further, while the government's decision to make 'Automatic Headlamp On (AHO)' mandatory in two-wheelers from 2017 is not the most energy efficient way, LED-based DRLs (day running lights) are more energy efficient.

Ahead of competition – strong R&D

FIEM has a strong in-house research and development center and has become India's first NABL-accredited lab for testing of automotive lamps.

Through the strong focus on research and development, the company was the first to supply LED-based lamps for a two-wheeler model. In fact, unlike other players in the industry who have sourced technology from outside and pay royalty, FIEM does not have that obligation, which positively impacts its financial performance.

Munjal, on the other hand, has a technological collaboration with Showa Corporation, Japan, and has been sourcing the best-in-class technology from there. The company has also indigenized many products to reduce the cost with the help of its collaborator.

BS-VI norms, to be implemented by 2020. would require vehicles to be more energy efficient, which would lead to higher adoption of LEDs as a lot of energy would be saved by those lighting products.

Further, BS-VI may lead to pre-buying of vehicles, giving a boost to the financials of both of these companies.

We also believe that the issues pertaining to the LED luminaries business of FIEM have been factored into the stock price, as is evident from the stock price underperformance over the past year, despite strong overall earnings.

The prevalent weakness in the market provides an opportunity to buy into these businesses with an eye on the long term.