ICICI Lombard is better positioned in the sector with market share of around 8 percent among all non-life insurance companies, making it a stock worth looking at.

However, the insurer's subdued profit growth in Q3 is an optical illusion. As per accounting rules, commissions paid to agents is recognised upfront while premium income is amortized over four quarters. Upfront expensing of acquisition cost incurred to achieve higher business growth dragged down the insurer's profit (referred to as new business strain) in Q3. Overall business growth and operating performance remained healthy.

While there is inherent volatility in its core risk-underwriting business, ICICI Lombard is better positioned in the sector with market share of around 8 percent among all non-life insurance companies, making it a stock worth looking at.

While the insurer maintains a diversified portfolio, mandated longer tenure policy in third party motor insurance by the Supreme Court benefited ICICI Lombard disproportionately, as its presence in the segment is well above the industry average. As a result, share of motor insurance in product mix increased to 42 percent as on end-December as compared to 36 percent at previous quarter end. 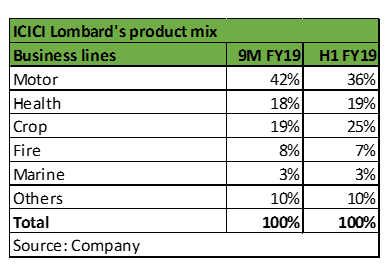 Management expects overall premium to continue to grow at 15 percent-20 percent in medium- to long-term. The insurer remains cautious on government related business segments like crop insurance and mass health.

The combined ratio, measure of insurance company's profitability, improved to 95.9 percent in Q3 from 101.1 percent in Q2. The insurer’s combined ratio was higher in the last quarter due to higher claims because of Kerala floods. 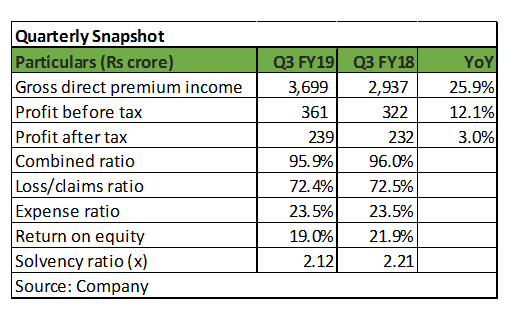 The overall underwriting performance was dragged by higher losses in the crop insurance with claims ratio at 116.9 percent for the 9M FY19. All other segments reported moderate claims ratio (below 100 percent).

Capitalisation is adequate for ICICI Lombard as reflected in its solvency ratios at 212 percent, comfortably above the regulatory requirement of 150 percent.

The general insurance industry in India has witnessed compounded annual growth rate (CAGR) of 17 percent in GDPI from CY01 to CY17. There are several growth levers that will drive high-teen growth over the next few years as well. India continues to be a grossly underpenetrated market with a non-life penetration at one third of the global average in CY17. The insurance density (non-life insurance premium per capita) also remains significantly lower than other developed and emerging market economies.

Regulations continue to be progressive and supportive of growth in the sector.

For instance, GST rate on third-party motor insurance premium in case of goods carrying vehicles was reduced from 18 percent to 12 percent effective from January 1, 2019. The reduction in tax rate is expected to lower the cost of insurance, thereby making it affordable, which is a positive change for the general insurance industry.

In another circular, the Regulator has unbundled and de-tariffed compulsory personal accident cover.

From September 2018, following the Supreme Court's order, the regulator made third party (TP) insurance cover for new cars and two-wheelers mandatory for a period of three years and five years, respectively. This was a big positive development since it is expected to address the problem of non-renewal of motor insurance in case of older vehicles and drive growth in motor insurance premium.

ICICI Lombard is well poised towards earnings growth with an increase in insurance penetration, focus on profitable segments and improvement in operating efficiency. The stock is currently trading at 7.7 times its trailing book. The current valuation is rich even after considering high return on average equity at over 21 percent.

We have seen that leading companies in the secular growth sector tends to trade at higher multiples for a long period of time. In the absence of suitable and comparable listed peer, ICICI Lombard trades as a proxy for the sector commanding a higher valuation. While the premium valuation will sustain, near term upside in stock price is limited.  Nevertheless, investors with long term horizon and wanting to participate in the growth in non-life insurance sector, can consider buying the stock on dips.