Here’s what to expect from today’s OPEC meet

OPEC’s meeting in Vienna, which kicks off today, will decide the cartel’s future course of action. We look some major developments in the oil world, which could be taken up at the meeting

Highlights:
- Strong expectations of a supply cut but scepticism over the final deal
- Estimation of a 1-1.4 million barrels per day production cut
- Uncertainty on whether Russia would be willing to forego barrels

Crude oil prices have seen a sharp plunge in the last two months, which impacted fortunes of oil exporting countries. The softness was due to: 1) Expectations of a slowdown in demand growth; 2) Softness in implementation of Iranian sanction, with US granting waivers to eight countries; 3) Rapidly rising supply; 4) An uptick in the US reported inventories; and 5) Covering of hedged exposure by banks.

Amid all this, Qatar has announced plans to exit the Organization of Petroleum Exporting Countries (OPEC), citing limited benefits from the cartel and its focus more on gas production and export.

During such an environment of growing discord within OPEC and concerns over continuity of the consortium, the members are scheduled to meet today to decide on the cartel’s future strategy.

While there is a brief outline of what the outcome might be and strong expectations that there would be some sort of a deal to take substantial barrels off the table, how much each nation might be willing to forego would be something to watch out for. There is scepticism about how willing Russia would be to be part of this production cut, given the country has been consistently looking to raise production.

Qatar to exit OPEC
In a surprise announcement, Qatar disclosed its intentions to leave OPEC, citing limited benefits it enjoys from the cartel and minimal returns on investments it makes in the group. Qatar highlighted that while it does not want to exit oil export in any way, it wants to focus on increasing gas exports. Though Qatar accounts for a mere 2 percent of OPEC’s oil production, the country is one of the largest natural gas exporters in the world and the strategy only seems reasonable. However, it raises questions on the continuity of the cartel itself.Saudi’s take
In the last few weeks, Saudi Arabia has been aggressively pushing the need for production cuts to stabilise prices. Though the nation would not want to irk the US who has bailed the Saudis out on the Jamal Khashoggi affair. (Khashoggi was a veteran Saudi journalist who was killed in Istanbul after walking into the Saudi consulate). Meanwhile, the US Senate passed a bill ending American support for the Saudi war in Yemen, significantly upping the pressure on Saudi Arabia not to cut output by too much.Russia’s takeThe dynamics of how the Russian ruble fluctuates are much less linked to oil as it is for the Saudi riyal. This makes lower prices much less painful for Russia compared to Saudi Arabia. Due to this, Russia has been less vocal on oil price movement and in pushing production cuts.

On December 1, despite Russia expressing its intention to continue working with Saudi Arabia over managing production on the sidelines of the G20 meet, there still seems some scepticism over how much output Russia would be willing to forego. There have been indications that Russia is negotiating a mere 150,000 bpd production cut. This means Saudi would have to forego a much higher level to achieve the target.

Given the increasing strain between Saudi and US, Russia might be more than willing to maintain strong ties with Saudi and be more flexible. 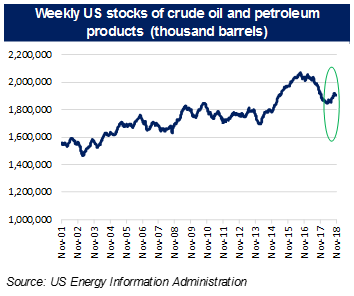 US oil inventories have seen an uptick in the last few weeks and was one of the major reasons which led to the softening in prices. With inventories pilling, it only indicates an oversupply in the market.

The US has been vocal and aggressive about bringing oil prices down. In a bid to exert pressure on Saudi Arabia, the US ended support to the Saudi war in Yemen. Moreover, the 180-day waiver granted by the US from Iranian sanctions seems more of a bridging mechanism to ensure adequate supply and lower prices. This period would give US producers some time to boost production and add capacities, which are expected to come in from the middle of 2019. That’s when US’s dependence on crude import would fall.

Indian has strong engagements with OPEC nations, sourcing nearly 83 percent of its crude, 98 percent of its LPG (liquefied petroleum gas) and 74 percent of its LNG (liquefied natural gas) needs. Rising crude oil prices had a serious impact on its current account as well as the overall fiscal math. There have been speculations that India is looking at countries outside OPEC (such as the US and China) to source its crude and gas supplies at more competitive rates.

Momentary exemption from the Iranian sanction until May next year comes as a relief for India and should ease pressure on the current account balance and margins of many companies. While oil prices seem in bearish mode for now, a rebound cannot be ruled out. The turmoil is also expected to continue until the market finds equilibrium. With volatile geopolitical dynamics, decisions from the OPEC meeting might define the contours of near term price movement.