Avanti Feeds, Apex Frozen Foods & Waterbase: The good days seem to be over

FY18 turned out to be an exceptional year for shrimp exporters as the companies benefited from slight pick-up in realisations as well as benign raw material prices.

Shrimp companies had a dream run last year. The 3 big companies in this space turned out to be multibaggers as the sector hit a sweet spot in FY18. The stock of Avanti Feeds, which was sub-Rs 500 levels in January last year, moved close to Rs 3,000 towards the end of the year. Similarly, shares of Apex Frozen Foods and Waterbase rose between 4 times and 5 times last year. 2018 has turned out to be bitter year for investors as stocks have seen a sharp correction in recent months, following concerns of oversupply and a drop in shrimp prices. So, is there a case for investments at this point of time?

Players on a capacity expansion spree

The shrimp feed market is largely controlled by two major players: Avanti Feeds and CP Aquaculture. Avanti is the leader in the shrimp feed business with 43 percent market share while the same for CP Aquaculture, part of Thai-based Charoen Pokphand Group, stands around 32 percent. The total market size of the shrimp feed industry is estimated around 1-1-1.2 million tonne per annum (mtpa) in FY17 with capacity of about 2.2 mtpa. Industry experts expect the industry to grow at 15-20 percent annually for the next 3 years. 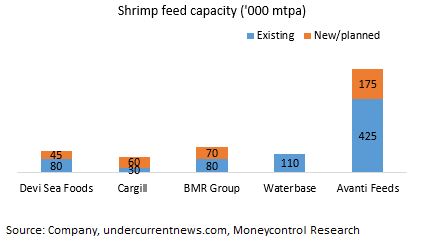 To take advantage of the growing market, aquaculture players have been on an aggressive capacity expansion path in recent years. Avanti has recently completed its shrimp feed expansion process, which took its total capacity to 600,000 mtpa at the end of March. Last month, Cargill, the world’s largest agricultural company, inaugurated its Indian feed plant, which tripled its output to 90,000 mtpa. Similarly, Andhra-Pradesh-based Devi Seafoods India, the country’s second-largest shrimp exporter,has tripled its capacity in the last three years. 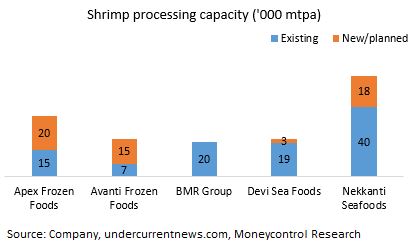 Realisations to take a hit on oversupply concerns

The aquaculture industry is highly competitive as there are low-entry barriers. The companies in the sector compete with several domestic and international players, primarily in Asian countries such as Indonesia, Vietnam, Ecuador and Thailand. Besides they also face competition from several players in the unorganised sector.

While companies attribute the price fall to sluggish demand in the US market, the management of Avanti and Waterbase expects prices to revive in the short term. With so many players undergoing capacity expansion at the same time, we expect competitive intensity (domestic and international) to remain at elevated levels and realisations to remain under pressure in the short to medium term on oversupply concerns.

The major raw material for production of shrimp feed is soya de oiled cake (DOC), wheat flour and sterilised fish meal. Together these account for 54-55 percent of Avanti’s FY16 and FY17 revenue. 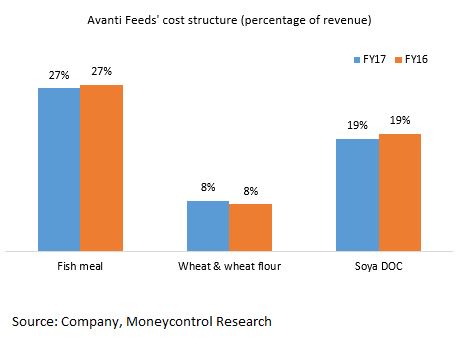 Operating margins expanded in FY18 as prices of soyabean and fishmeal dropped 8-10 percent year-on-year (YoY). At present, fishmeal and soyabean are trading higher by 22 and 35 percent YoY. A back of the envelope calculation reveals that higher prices should impact Avanti and Waterbase’s margins by 8-10 percent. 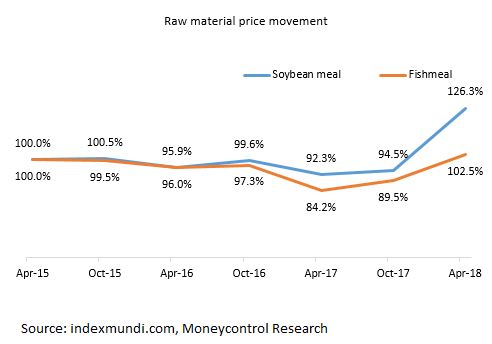 Soyabean is a global crop and its prices are driven by global demand-supply dynamics. Prices are unlikely to moderate to 2017 levels on account of multiple reasons. First, soybean production in Argentina (third largest producer) has fallen 30 percent this year. Second, China is planning to cut import tariffs on soyabean from India. Third, the Indian government has increased import duties on crude and refined soybean oil to 30 percent and 35 percent, respectively. Fourth, the government and domestic players are encouraging soya food as a protein rich-diet for vegetarians.

The US Department of Commerce is also contemplating raising anti-dumping duty on shrimp exports from India to 2.34 percent from 0.84 percent. The quantum of hike is small and should not impact the topline growth meaningfully, but bottomline could be impacted due to margin compression.

The long-term growth outlook for industry looks bright as the global seafood consumption is on an uptrend. Crisil expects shrimp exports from India to nearly double to $7 billion by 2022. However, it expects short term pain in the sector as US shrimp export realisations (in dollar terms), which account for 70 percent of export value, are expected to fall 10 percent in FY19 due to increased production of Vannamei shrimp (white shrimp) in India and other key exporting countries and slower offtake from the US.

FY18 turned out to be an exceptional year for shrimp exporters as companies benefitted from a slight pick-up in realisations as well as benign raw material prices. Q1 and Q2 are the strongest quarters for shrimp exporters as they account for over 60 percent of yearly revenue. Given the current situation in the industry, companies are potentially staring at a washout year as realisations are at multi-year lows and raw material prices are significantly higher.

The shrimp feed business is essentially a commodity business with little or no pricing power. With industry utilisation at 50 percent, the current demand-supply scenario should keep a check on prices, although a weak rupee-dollar might boost shrimp exports.

Avanti, through its superior execution, has already gained over 40 percent market share in the feeds segment. Given its scale and market share, the feed segment looks difficult to scale from here and incremental revenue growth will be derived from the shrimp processing segment.

Apex is engaged in shrimp processing, which is a much larger market compared to feeds. Its exports majorly comprise processed Vannamei shrimp, which is sold under the brand name: Bay Fresh, Bay Harvest and Bay Premium. The vertically-integrated shrimp processor, with operations spanning hatchery and farming, has been gradually shifting focus from the US market to grow and diversify its revenue base. The company is going through a backward integration and focusing on high-margin value-added products, which should help it increase margins in the long run. With a majority of the capex behind it, the company has enough spare capacity to grow 30-40 percent over the next 3-4 years.

Although the long term prospects for Apex seem bright, we expect near term pain in the all three stocks as quarterly results should be a dampener in all aspects. Investors should avoid any positions in these companies for the time being and wait for greenshoots to appear before venturing in.

For more research articles, visit our Moneycontrol Research pageGet access to India's fastest growing financial subscriptions service Moneycontrol Pro for as little as Rs 599 for first year. Use the code "GETPRO". Moneycontrol Pro offers you all the information you need for wealth creation including actionable investment ideas, independent research and insights & analysis For more information, check out the Moneycontrol website or mobile app.