Will bulls march on D-St this March? Historical data suggests it's likely

With the market in a consolidation mode, and with domestic flow coming into the market it’s very likely that the fiscal year could end on an upbeat note, said Naveen Kulkarni, of Reliance Securities

Historical data suggests that in six out of the last 10 years during the month of March, benchmark indices closed in the green. Sensex witnessed strong gains in March 2009 when it recorded an upswing of 12 percent followed by over 6 percent rise in 2014 and 2016.

Some analysts attribute the March euphoria to the financial year closing, but this year, general elections and the geopolitical situations are likely to affect the trend for markets.

“Historically, March phenomenon could be attributed to local allocation factors associated with tax planning. With the market in a consolidation mode, and with domestic flow coming into the market it’s very likely that the fiscal year could end on an upbeat note,” Naveen Kulkarni, Head of Research, Reliance Securities told Moneycontrol.

“General election and geopolitical tension are the two factors one should keep a close watch. Both of these factors will play a huge role in the market movement. Though opinion polls will be keenly watched, they tend to change. Therefore, investors need to be careful in treading the market,” he said.

Even institutional activity accelerates in March. Foreign institutional investors (FIIs) were net buyers in Indian market (debt + equity) in March in all of the last 10 years. FIIs poured in more than Rs 30,000 crore in 2017, followed by Rs 20,000 crore net flows seen in 2016 as well as 2014. 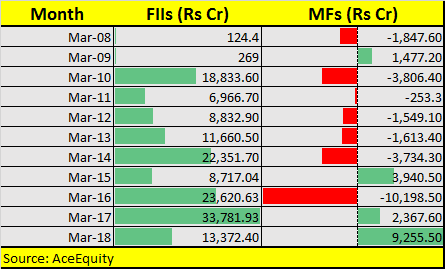 How are markets looking on charts?

The way markets shrugged off bad news around the geopolitical front suggests that bulls are here to stay and the momentum is likely to continue. Investors who have not joined the party are most likely waiting for a breakout.

If the momentum continues, experts suggest that Nifty is on track to add another 200 points that could translate into gains of roughly 300-400 points for the Sensex.

The Nifty managed to float above the lower end of its consolidation range 11,000–10,550 even in the midst of NBFC crisis or geopolitical tensions.

“Resilience shown by the Nifty in the past month or so suggests that traders/investors are finding value around 10,550 that has repeatedly propelled the index higher,” Mazhar Mohammad, Chief Strategist – Technical Research & Trading Advisory, Chartviewindia.in told Moneycontrol.

“Of late, the market appears to have shrugged off its sluggish pace of movement. Now, it appears it is on the verge of a bigger breakout above its 3-month old consolidation range. March can be expected to favour the bulls. Once Nifty manages a close above 11,000 for a couple of sessions then we will not be surprised to see a higher target close to 11,400 in next 30-45 days,” he said.