Trade Spotlight | What should you do with Aegis Logistics, BASF India, Speciality Restaurants on Wednesday?

Stocks that were in action included Aegis Logistics which jumped 8.7 percent to Rs 288, the highest closing level since August 4, 2021 and formed large bullish candlestick pattern on the daily charts with robust volumes. In fact, the stock has been in an uptrend, barring intermittent corrections, since after it has broken the long downsloping resistance trend line (adjoining July 13, 2021 and June 6) on July 21, 2022.

By looking at the higher time frame charts of Speciality Restaurants, we can notice that the trend in the stock was on the upside while forming continuously higher high, higher low formation. Around the level of Rs 117, we can spot change in polarity by the prices.

On July 29, 2022, the stock gave a breakout from rounding bottom pattern, which indicates that the prices can go higher in the direction of breakout and continue its prior uptrend.

The breakout was followed by high volumes which tells that the demand is pushing the prices higher and also confirms the breakout.

The prices are roaming around the upper Bollinger band which indicates that the volatility in the stock is rising for the upside move.

RSI (relative strength index) plotted on the daily timeframe is sustaining above 50 mark on daily as well as on weekly time frame which indicates that prices have a strong momentum in it. Also the stock is trading near its all-time high level which again confirms that the stock already is in a good momentum.

Going ahead, we expect the prices to rise higher till the level of Rs 245. Thus we recommend traders and investors to buy and accumulate the stock, with a stop-loss of Rs 170, on the closing basis. On the daily timeframe of BASF, prices were in a downtrend from August 11, 2021. Post May 2022 prices witnessed a pause in the form of ascending triangle pattern.

Prices on August 3, 2022 gave a breakout from Ascending Triangle pattern indicating reversal on the upside from prior downtrend. The breakout is in sync with the high volumes which confirms the breakout.

The Bollinger band has started to expand with rising volumes reflects that the volatility in the prices are rising for the upside movement.

RSI plotted on the Daily timeframe have given a breakout which tells that prices are in strong momentum.

We recommend traders and investors to buy and accumulate this stock for the target of Rs 3,400 with a stop-loss of Rs 2,740 on the closing basis. 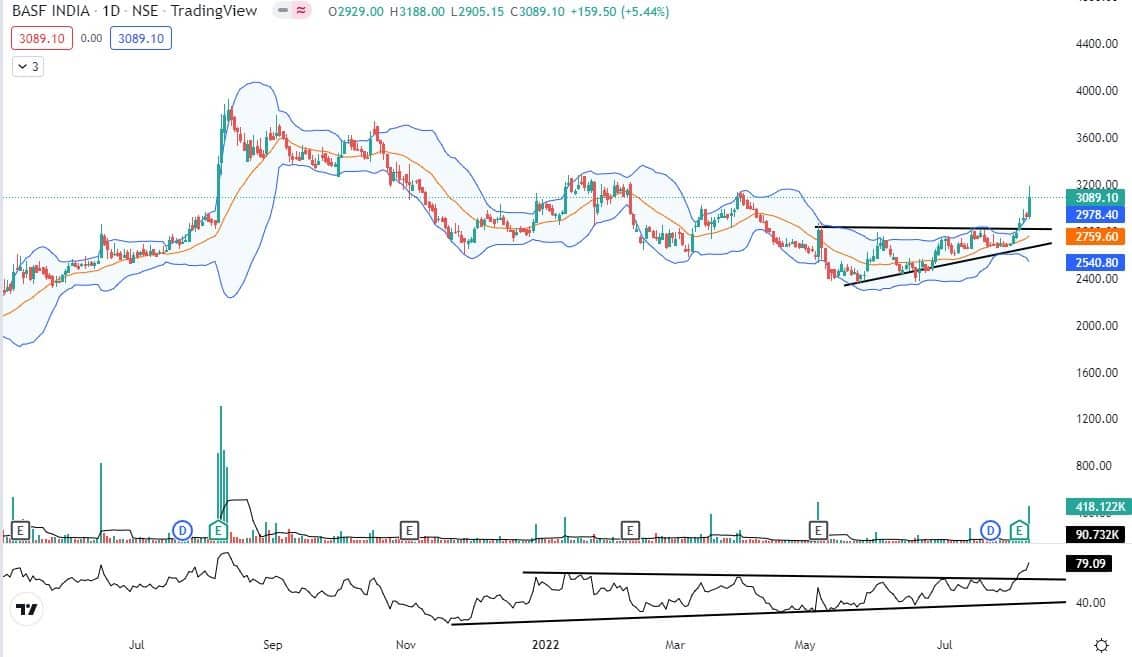 On the daily timeframe, we can spot that prices were in a clear downtrend from July 2021 and later from December 2021 prices formed a base in the range between Rs 250 – 170 levels.

Prices on July 21, 2022 gave a breakout from Symmetrical Triangle pattern which Points towards the beginning of new trend on the upside.

The breakout was confirmed by the high volumes.

Currently the prices are around the Upper Bollinger band which tells that volatility in the stock has already started to rise for upside movement.

RSI plotted on the daily as well as on weekly timeframe is above 50 mark indicating strong momentum in the price.

We recommend traders and investors to buy and accumulate this stock for the target of Rs 340, with a strict stop-loss of Rs 250 on the closing basis. Disclaimer: The views and investment tips expressed by investment experts on Moneycontrol.com are their own and not those of the website or its management. Moneycontrol.com advises users to check with certified experts before taking any investment decisions.
Sunil Shankar Matkar
Tags: #Aegis Logistics #BASF India #Market Edge #Nifty #Sensex #Speciality Restaurants #Stocks Views #Technicals #Trade Spotlight
first published: Aug 10, 2022 07:04 am