Nagaraj Shetti of HDFC Securities feels a sustainable move above the immediate resistance of 17,800 could open strong upside bounce towards 18,000 mark.

The market closed its volatile session with minor losses on September 29 ahead of expiry of September derivative contracts on Thursday, continuing downtrend for second straight day due to selling in select banking & financials, auto and FMCG stocks. However, metals, pharma and PSU banks bucked the trend, rising 1.6-2.7 percent.

"A small positive candle was formed at the lows with minor upper and lower shadow. Technically, this pattern indicate a formation of high wave type candle pattern. Normally, such formations after a reasonable decline could hint at a possibility of halt in present trend and this needs to be confirmed with reasonable upmove in the subsequent sessions," said Nagaraj Shetti, Technical Research Analyst at HDFC Securities.

He feels the short term trend of Nifty remains negative. "But, lack of sharp follow-through selling and an emergence of buying from the lower supports suggest chances of upside bounce in the market in the next 1-2 sessions," he said.

Maximum Call open interest of 94.94 lakh contracts was seen at 18000 strike, which will act as a crucial resistance level in the September series.

Maximum Put open interest of 59.83 lakh contracts was seen at 17000 strike, which will act as a crucial support level in the September series.

Persistent Systems: The company's officials will meet investors and analysts on September 30.

Century Textiles: The company's officials will meet investors and analysts in B&K's Ideation Conference on September 30.

Persistent Systems: US subsidiary acquire Software Corporation and its affiliate Fusion360. The company also entered into an agreement with Shree Infosoft, India to acquire its business. Along with this transaction, its US subsidiary will acquire certain assets from Shree Partners LLC, USA, parent company of Shree Infosoft.

Blue Dart Express: The company announced its general price increase, effective from January 2022. The average shipping price increase will be 9.6% compared to 2021. 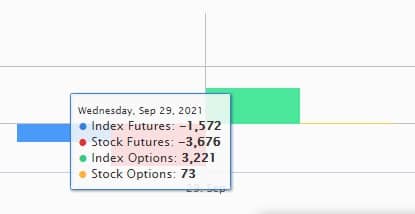 One stock - Sun TV Network - is under the F&O ban for September 30. Securities in the ban period under the F&O segment include companies in which the security has crossed 95 percent of the market-wide position limit.