Chandan Taparia of Motilal Oswal Financial Services said Overall price setup suggests bullish bias at the upper band of the trading range but requires a hold above 10,985 to extend its fresh move towards 11,118, then 11,200

The Nifty fell for the second consecutive day on March 8 and but gained 1.5 percent during the week despite global growth concerns.

The index managed to settle the week above 11,000 and formed bullish candle on the weekly scale with the highest weekly close in the last 24 weeks.

"Overall price setup suggests bullish bias at the upper band of the trading range but requires a hold above 10,985 to extend its fresh move towards 11,118, then 11,200. Whereas on the downside, support exists at 10,929, then 10,888," Chandan Taparia, Associate Vice President | Analyst-Derivatives at Motilal Oswal Financial Services told Moneycontrol.

Interestingly, the Nifty is trading above its three major simple moving averages 20-DMA, 50-DMA, and 200-DMA that are placed between 10,830 and 10,870. This suggests a validated up move is in progress and strong support zone exists on the lower side, experts said.

The broader markets also closed marginally lower on March 8 but continued its momentum for another week and outperformed benchmark indices. The Nifty Midcap rose 2.5 percent and Smallcap index rallied 4.2 percent during the last week.

Maximum Call open interest (OI) of 22.45 lakh contracts was seen at the 11,500 strike price. This will act as a crucial resistance level for the March series.

Maximum Put open interest of 33.70 lakh contracts was seen at the 11,000 strike price. This will act as a crucial support level for the March series. 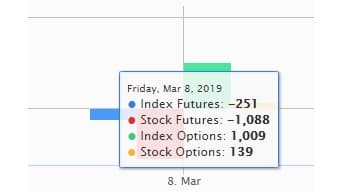 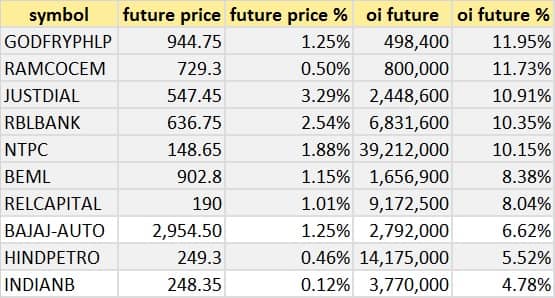 Balaji Telefilms: Shobha Ravi Kapoor bought 7,02,964 shares of the company at Rs 87 per share on the NSE.

Granules India: Promoter Krishna Prasad Chigurupati sold 50,00,000 shares of the company at Rs 101.08 per share on the NSE.

Allcargo Logistics: Management of the company will be attending the Valorem Analyst Conference 2019, organised by Valorem Advisors to be held on March 11.

Shreyas Shipping & Logistics: Management of the company will be attending the Valorem Analyst Conference 2019, organised by Valorem Advisors to be held on March 11.

Alphageo (India): Management of the company will be attending the Valorem Analyst Conference 2019, organised by Valorem Advisors to be held on March 11.

Kwality: Board meeting is scheduled for March 14 to consider the unaudited financial results for the quarter and nine months ended December 2018.

Rallis India: Analyst meet is scheduled to be held on March 11.

Multi Commodity Exchange of India: The company's officials will have concall with Prusik Investment Management on March 11.

Himachal Futuristic Communications: Management of the company will be attending the Valorem Analyst Conference 2019, organised by Valorem Advisors to be held on March 11.

Commercial Syn Bags: Management of the company will be attending the Valorem Analyst Conference 2019, organised by Valorem Advisors to be

Viceroy Hotels: 18th meeting of the Committee of Creditors of the company is scheduled to be held on March 11.

Sheela Foam: Officials of the company will be meeting with various investors on March 11 in Mumbai.

Zenith Healthcare: Board meeting is scheduled for March 22 to review the performance of Non-Independent Directors and the board

as a whole, and the performance of the chairman of the company.

Sharda Motor Industries: Board unanimously approved the scheme of arrangement of the company with the resulting company presently under incorporation in the name of NDR Auto Components Limited. The scheme provides for the demerger of Automobile Seating undertaking into the resulting company.

GMR Infrastructure: Subsidiary GMR Airports received the formal Letter of Award from MIHAN India Limited, the concessioning authority for the Nagpur Airport, towards the development, operations and management of Dr Babasaheb Ambedkar International Airport, Nagpur, at a revenue share of 14.49 percent of gross revenues.

Vishal Bearings: Board allotted 44,96,000 equity shares of Rs 10 each, as bonus shares to those members of the company entitled thereto as on March 04, 2019 being record date fixed for the purpose.

Bharat Electronics: Board declared the second interim dividend of 70 paise per share of Re 1 each fully paid-up (70 percent) for the financial year 2018-2019.

Suven Life Sciences: Board approved the creation of wholly owned subsidiary (WOS) Suven Pharma, Inc a Delaware Company in USA under CRAMS division, and investment of $75 million in the said WOS for new business opportunities and acquisitions, etc.

HG Infra Engineering: Company has received a letter from NHAI with respect to nullifying of bidding process and to re-invite the bids for new EPC project under NHAI for construction of 6-lane access controlled Green field highway in Rajasthan.

Salora International: The company proposed voluntary delisting of equity share from National Stock Exchange of India without giving exit opportunity to the shareholders as the equity shares of the company will continue to remain listed on BSE Limited.

Monte Carlo Fashions: Company will dispatch the Letter of Offer along with the tender forms for the buy-back to eligible shareholders appearing on the record date of February 22, on or before March 13, 2019. The buyback will open on March 19 and close on April 2.

Bharat Dynamics: Company has fixed March 27 as the record date for the purpose of payment of first interim dividend.

Mcleod Russel: Company decided to dispose of its estates and bearer plants and other assets of Boroi Tea Estate in Assam, and for the said, it entered into a Memorandum of Understanding with Jatinga Agro Tech Private Limited.

CG Power and Industrial Solutions: Company completed the divestment of its power business in the US and the automation business based out of Spain. Hence, the board decided to re-classify its businesses and as of now the non-cash impact of such re-classification is estimated to be approximately Rs 200 crore in the consolidated financial statements.

Eveready Industries: DSP Trustee cuts its stake in the company by 3.8 percent to 1.09 percent.

Dilip Buildcon: Company has been declared L-1 bidder for EPC project in Maharashtra, NH-547E, valued at Rs 480.06 crore by the National Highways Authority of India.

Dhampur Sugar Mills: CARE reaffirmed its rating of the company with revision in outlook from 'A-; Negative to A-; Stable for long term credit facilities from banks and fixed deposits.

Sun TV Network: Board declared a fourth interim dividend of Rs 2.50 per share of Rs 5 each for the financial year 2018-19.

Zicom Electronic Security Systems: Board appointed Dhaval Mehta as an (additional) independent director of the company.

For March 11, IDBI Bank, Reliance Power and Jet Airways are present in this list.

Out of F&O ban: Wockhardt