Benchmark indices Sensex and Nifty closed in the red on September 12 on profit-booking as investors turned cautious ahead of the release of key macroeconomic numbers.

On the other hand, the country's industrial output grew 4.3 percent month-on-month (MoM) in July against a growth of 2.0 percent in June.

Manufacturing output, which accounts for more than three-fourths of the entire index, grew 4.2 percent in July, against 1.2 percent growth in June.

Broader BSE Midcap and Smallcap indices closed 0.18 percent down and 0.12 percent up, respectively.

Rupee's healthy gain against the US dollar capped the fall of the domestic market, whereas firm global cues amid the signs of easing US-China trade war also saved the market from suffering a steep fall.

Continuing its winning run for the sixth straight session, the rupee climbed 52 paise to end at 71.14 against the US dollar.

Nifty formed a bearish candle which resembled a bearish engulfing kind of pattern on daily charts.

A bearish candlestick pattern suggests that bears were able to regain control after the index moved in a narrow range for the past few sessions. It is usually seen as the end of an uptrend but if the index breaks below its crucial support level of 10,850, selling pressure could accelerate.

"The present weakness is unlikely to damage the near-term positive sentiment of the market and we are likely to see upside bounce from the lows. Next lower supports to be watched are at 10,920-900 levels," Shetti added.

Maximum call open interest (OI) of 23.87 lakh contracts was seen at the 11,000 strike price. It will act as a crucial resistance level in the September series.

Maximum put open interest of 29.42 lakh contracts was seen at 10,800 strike price, which will act as crucial support in September series. 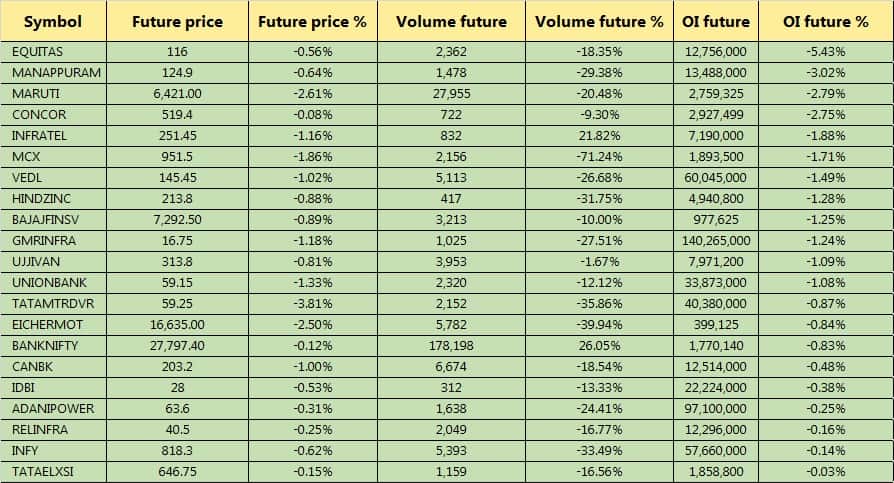 Upcoming analyst or board meetings/briefings:

Acrysil: The board will meet on September 13 to consider and approve the cost audit report for the financial year 2018-19.

Adharshila Capital Services: The board of the company will meet on September 13 to consider and approve quarterly results.

Bemco Hydraulics: The board of the company will meet on September 13 to consider and approve quarterly results.

Canara Bank: The board of directors of the bank is scheduled to meet on September 13 to consider the amalgamation of Syndicate Bank into Canara Bank and to consider capital infusion up to Rs 9,000 crore by the government by way of preferential issue of equity shares.

Dr Reddy's Labs: The company said it has received an EIR from the USFDA, indicating the closure of the audit of its formulations manufacturing plants at Duvvada, Visakhapatnam, which was completed on June 21, 2019.

Biocon: The company said it has signed a license and supply agreement with a subsidiary of China Medical System Holdings for three generic formulation products.

PNB: Punjab National Bank said CARE Ratings has placed the ratings of its bonds on "credit watch with developing implications".

SBI: State bank Of India has informed the exchange regarding an offer for sale of equity shares of SBI Life Insurance Company.

Coffee Day Enterprises: The exchange has sought clarification from the company with respect to recent news item captioned ICRA Cuts Rating Of Coffee Day's Long-Term Loans. The response from the Company is awaited.

PVR: The exchange has sought clarification from the company with respect to recent news item captioned PVR, NY Cinemas probed for not passing on GST perks. The response from the Company is awaited.

Oriental Bank Of Commerce: CARE Ratings has revised the rating outlook of Tier I & II Bonds from "stable" to "under credit watch with developing implications".

DHFL: The company defaulted on payment of interest & principal on NCDs worth Rs 197 crore.

L&T Finance Holdings: The company will consider raising up to Rs 150 crore via preference shares.

Rs 126.82 crore worth of shares in the Indian equity market on September 12, as per provisional data available on the NSE.

For September 13, not a single stock is under F&O ban. Securities in ban period under the F&O segment include companiesin which the security has crossed 95 percent of the market-wide position limit.