The Nifty50 registered a bullish candle on a weekly basis tracking positive global cues. Sectorally, all major indices ended the week in the green lead by financials, metal, and auto.

The Indian market witnessed a volatile week, but bulls regained their control on D-Street in the second half of the week pushing the S&P BSE Sensex above 32,000 while the Nifty50 reclaimed 9,550 levels.

There are as many as 94 stocks in the S&P BSE Small-cap index gained 10-30 percent that includes names such as Orient Cement, Subex, HOEC, JBF Industries, Alok Industries, Prozone, Birla Corp and Skipper. 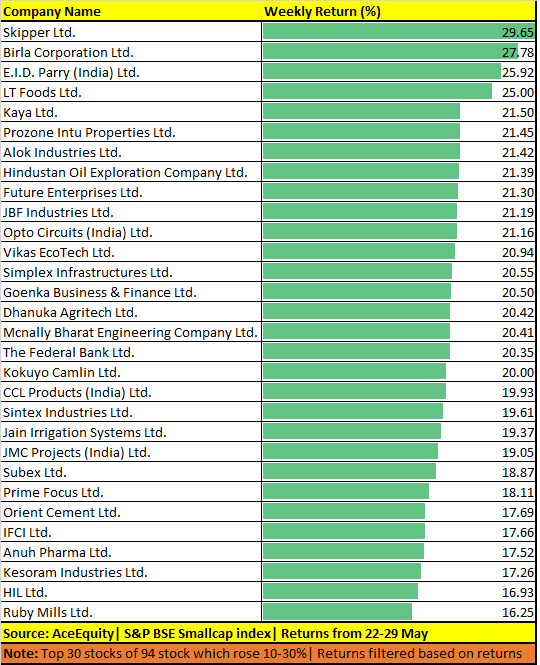 In the S&P BSE Midcap index – as many as 18 stocks rose 10-30 percent, including  names such as RBL Bank, Godrej Properties, The Federal Bank, Future Retail and Jindal Steel & Power among others. Indian markets largely mirrored movement seen in the United States' markets despite growing cases of COVID-19 in India as well as globally. But, growing tensions between the US and China capped gains.

“Although the number of new infections remained elevated in India, the general expectation was that the economy would slowly start emerging out of restrictions, post-Lockdown 4.0, except in the hotspots,” Vinod Nair- Head of Research- Geojit Financial Services told Moneycontrol.

“Globally, the markets heaved a sigh of relief after more stimulus packages were announced by China, the European Union, and other countries, following the easing of lockdown measures. However, these gains were somewhat clouded by the persistent US-China tensions, which threatened to affect the global trade and recovery process,” he said.

Strong rollovers for the June series as well as a close above 9,500 on the Nifty suggest that the momentum could well continue as long as the index holds above 9,400 levels. But, muted global cues as well as weak gross domestic product (GDP) GDP print for the March quarter could cap the upside.

"Indian market’s underperformance can be attributed to the stringent and extended lockdown and lack of near-term direct benefits from the government to jump-start the economy,” Jimeet Modi, Founder & CEO, SAMCO Securities & StockNote told Moneycontrol.

“This bull bear tussle phase is likely to continue for a few more months before investors can see any significant lasting up move in the indices," he said.

The Nifty50 registered a bullish candle on a weekly basis tracking positive global cues. Sectorally, all major indices ended the week in the green lead by financials, metal, and auto.

Data suggests that the Nifty50 has witnessed the longest pullback in the past four weeks as the index rallied 800 points, compared to the previous up move of 541 points.

The crucial support for the index is placed at 9,200 and the Nifty50 could well retest 10,000 levels. Possibility of cool off is high as the index trades near key resistance levels, suggest experts but that should be used to go long, they say.

“This makes us confident that the index would resolve higher and eventually challenge the psychological mark of 10,000 in the coming weeks,” he said.

Shah further added that any cool off from here on should not be considered as negative instead it should be capitalised as incremental buying opportunity to ride the next leg of the up move.