The index formed a Bearish Belt Hold kind of pattern on the daily charts while a bearish candle on the weekly charts for the second consecutive week in a row.

Benchmark indices might have moved in a narrow range, but the big carnage was seen in the small & midcaps which fell up to 30 percent in five trading sessions.

India is displaying divergent behaviour when compared to the global market. The Wall Street also ended lower on Friday but closed the week with gains.

All three major indexes posted gains for the week: the Dow rose 0.4 percent, the S&P 500 gained 0.5 percent, and the Nasdaq added 0.7 percent.

Mixed macro data, the upcoming US Federal Reserve policy meeting on June 18-19, the progress of monsoon, high valuations, the progress of US-China trade talks and retaliatory tariff from India on US goods are some of the factors which weighed on the sentiment.

Indian markets ended the week on a negative note with cash strap, and debt-laden companies bear the brunt of brutal sell-off. The sell-off intensified on Friday afternoon on news reports that India would impose retaliatory tariffs on US goods.

The S&P BSE500 index which represents nearly 93 percent of the total market capitalization on the BSE fell 0.7 percent in the same period.

The fall in the index was led by stocks from both Small & Midcap space which include names like The Lakshmi Vilas Bank, Indiabulls Real Estate, Dilip Buildcon, Jaiprakash Associates, Reliance Power, Yes Bank, Reliance Capital, and Jet Airways among others. 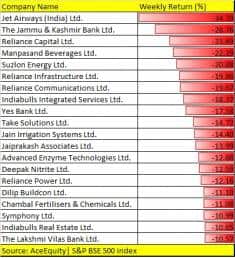 “Market breadth is chaotic. The mid and smallcaps stocks are still under pressure. Such a divergent behavior signals one thing that markets are unwilling to move either way,” Jimeet Modi, Founder & CEO, SAMCO Securities & StockNote told Moneycontrol.

“The Nifty could test the gap created on Election Day results in a worst case scenario, which could be a good starting point for the bulls,” he said.

The index formed a Bearish Belt Hold kind of pattern on the daily charts while a bearish candle on the weekly charts for the second consecutive week in a row. It breached its 20-day exponential moving average (EMA) briefly.

The Index has not been able to sustain above 12,000 levels for the entire week. It traded in the range between 12,000 levels on the higher side and 11,800 levels at the lower side.

For the next week, most experts feel that the upside looks limited, and chances of further consolidation look evident. A breach of 11720 on the downside could take the index towards 11600 levels.

“Upside looks limited for Nifty and it may find difficult to close over 12,000, where the supply is expected. On the other hand, downside movement will be swift, and Nifty can soon touch 11,720 levels and close below that may take it to 11,600 levels,” Romesh Tiwari, Head of Research, CapitalAim told Moneycontrol.

“On the technical chart, RSI is looking weak on daily charts and now placed at 51.87 levels. MACD on the same chart has shown a downward crossover. Negative news flow from the finance sector on loan repayment is dampening the investor’s sentiments which can be a trigger for a bigger correction before the budget session,” he said.