Sensex on firm footing in the month following Diwali in last 5 years; can it hit record high this year?

Historical data for the last five years post-Diwali suggest that Sensex has risen 1-4 percent in the period following Diwali. The Sensex rallied by over 45 post-Diwali in 2019, followed by over 3 percent gain in 2015.

The year 2020 has been a volatile one for the equity market. At the start of the year, benchmark indices hit a high in January and then a 52-week low in a matter of just two months in March. And now, we are just 4 percent away from reclaiming fresh record highs.

The Indian market has recouped most of the losses after hitting a low in March. Both Sensex, and Nifty have rallied by over 50 percent since then, and are on the verge of breaking into unchartered territory if the momentum continues.

Sensex is just 4 percent away from hitting a record high, placed at 42,273 compared to October 21's closing of Rs 40,707. Historical data of last five years suggests that Sensex rallied 0.2-6 percent in the run-up to Diwali, and the trend post-Diwali is much more firm. 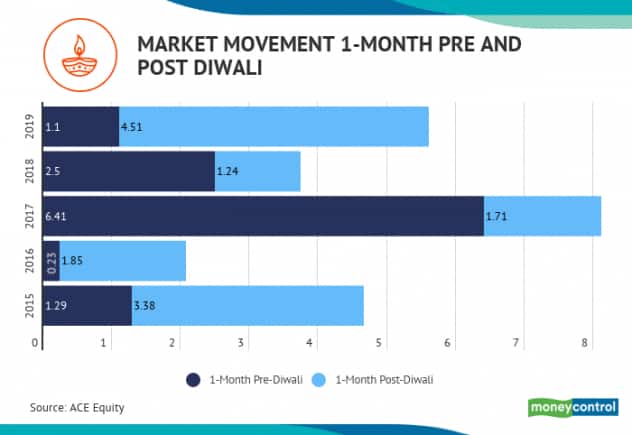 Five-year data suggests that Sensex has risen 1-4 percent in the period following Diwali. The Sensex rallied by over 4 percent post-Diwali in 2019, followed by over 3 percent gain in 2015.

If the momentum continues and both Sensex and Nifty manage to hold on to their crucial support levels we could hit the magic number around Diwali. The S&P BSE Sensex record high is placed at 42,273 while for Nifty50 it is placed at 12430.

“Global cues will continue to be in focus as a revival in virus cases around the world would lead to more restrictions and more pressure on economic recovery. Likewise, the news on COVID vaccine development will be on the radar,” Palka Chopra, Senior Vice President Master Capital Services told Moneycontrol.

“If the momentum continues in terms of reforms and improvement in the current scenario of slowdown and if the COVID treating vaccine is announced soon enough, the market would see record highs post-Diwali,” she said.

Another major factor which is boosting domestic sentiment is the seasonality factor. In the run-up to the festive season, sectors like autos, capital goods, home appliances, as well as FMCG usually come in demand, and in 2020 because of COVID, pent-up demand is expected which could further fuel earnings.

The September quarter earnings have not also been that bad hence any dip triggered by an external event will get bought. Hence, starts are aligned for Sensex, and Nifty to achiever newer highs possibly in the run-up or post Diwali but will it be able to sustain --- that’s a bigger question.

“We are talking about seasonality and it is bound to have an exceptional year. Traditionally, as one moves closer to Diwali one sees a sudden spick in demand for Autos, Home appliances, Textile, and other FMCG products which later on have an impact on other sectors too. This demand normally due to the way traditionally Indians celebrate Ganpati, Navrati & Diwali,” Vishal Wagh, Research Head of Bonanza Portfolio told Moneycontrol.

“Coming to global events, the US election normally has an impact on the world economy. The volatility is always there on cards. If Nifty sustains below 11650 then surely one may see further downside till demand zone of 11200 vice versa if close above 12050 then chances of moving higher will increase,” he said.

Wagh further added that Nifty is not far away from an all-time high. A move of 5% will take it well above record high but can Nifty sustain there will be a big question.