Shares of Reliance Industries Ltd., India’s largest company by market capitalisation, underperformed the benchmark S&P BSE Sensex and the Nifty 50 in 2021 for the first time in seven years.

Reliance shares gained 19.3 percent in 2021, while the Nifty climbed 22 percent and the Sensex advanced 24.1 percent.

“The new smartphone JioPhone Next plans are less aggressive than we expected,” Morgan Stanley said in a note to investors. “While the subscriber market share increase could be more measured, considering the handset price point, subscriber churns could be lower as well.”

The re-evaluation of a proposed investment in Reliance’s oil-to-chemicals business by Saudi Aramco and Reliance was a sentiment dampener.

“Non-consumption of deals is negative; but we don’t rule out more broad-based partnership in future. Recent stock price correction offers an attractive entry point; we expect multiple value unlocking opportunities at play,” Prabhudas Lilladher said in a note to investors.

Kotak Institutional Equities upgraded the Reliance stock to ‘buy’ from ‘add’ after noting a favourable reward-risk balance following the decline in the shares and the relative sharp underperformance compared with peers in the telecom and retail businesses. 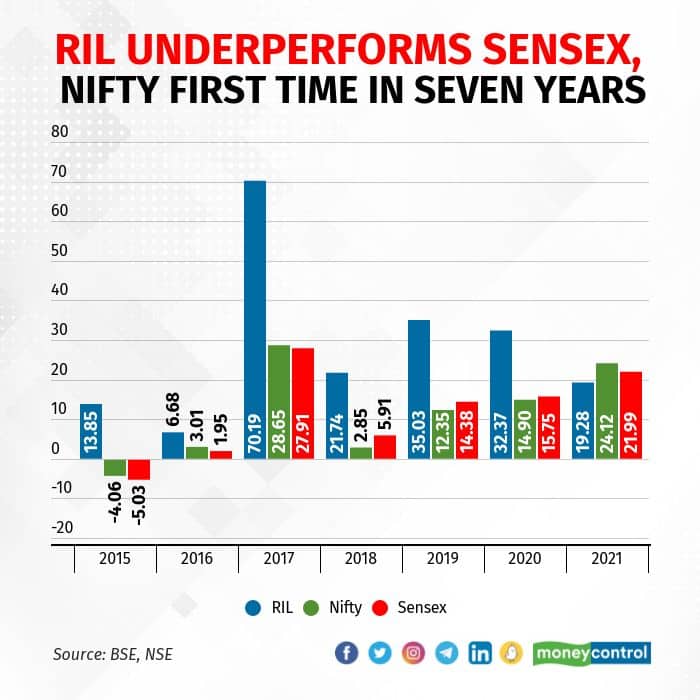 It expects Reliance’s earnings before interest, taxes, depreciation, and amortisation (Ebitda) to grow at a compound annual rate of 26 percent over the next two years, driven by strength in refining and polyester margins, higher telecom tariffs, robust growth in retailing, and an increase in contributions from the oil exploration and production segment.

It said the stock is set for a re-rating, led by the scaling up of its new commerce and energy ventures. Kotak said the stage is set for further increases in telecom tariffs in the coming years following the recent policy decision to defer adjusted gross revenue and spectrum liabilities payable by telecom companies by four years.

Kotak raised the FY22-24 Ebitda estimates for Jio by 8-23 percent and by 2-10 percent for Reliance (consolidated), factoring in higher average revenue per user along with a modestly lower subscriber base and other minor changes.

Analysts said the 5G spectrum auction and pricing, expected next year, progress in the new energy business with large acquisitions and stake sales to outside investors, and the listing of Jio and retail entities would be the new triggers for the Reliance stock.

“We do not see Jio/Retail being listed for the next 18 months at least; stake sales of any other businesses (e-commerce/smaller stake sale in O2C) would be positive. We highlight that e-commerce across segments for Reliance is growing strongly,” JPMorgan said in a note to investors.

Chairman Mukesh Ambani said recently that Reliance will become one of the strongest and most reputed Indian multinational firms in the world in the coming years, propelled by its entry into the clean and green energy sector as well as retail and telecom operations reaching unprecedented heights. Ambani also said it is in the process of effecting a momentous leadership transition.