The Nifty50 and the Sensex have rallied 41 percent from the lows of March 23, with leading sectors gaining 32-55 percent during the period.

India now has more than 7.2 lakh confirmed coronavirus infections, the third-highest in the world, and over 20,000 deaths.

The country has been adding more than 20,000 cases each day since July 3, a spike that experts say poses a major risk to earnings and growth as it will come in the was the full capacity utilisation. Adding to the problem is that hot spots or the worst-hit areas are in major revenue spinner states like Maharashtra and Delhi.

"Given the high rate of spread of infection at around 10 percent, which should be below 7 percent consistently to prevent an increase in active cases, restrictions are likely to remain in place at least in the hotspots," Japanese brokerage firm Nomura said, adding risk to earnings remained.

The Nifty consensus earnings estimates for FY21 and FY22 are down 27 percent and 16 percent, respectively, since the start of FY20.

Economic activity across sections has improved since late May. There has been a month-on-month increase in sales and the major support has come from rural areas, as agriculture has largely remained unaffected by the outbreak. Infections are high in urban areas and companies are not using their full capacity due to social distancing norms.

"On consumption, we find stable sales of staples and a pick-up in certain discretionary segments. One consistent feedback from companies has been stronger growth in rural areas compared to urban," said Nomura.

"The reported recovery data needs to be seen against the backdrop of pent-up demand, higher economic activity during the start-up phase (only around 40 percent of the economy was functional during lockdown) and higher inventory stocking by businesses and households. Seen in this context, the data thus far does not inspire confidence. Therefore, the recovery is not reflective of underlying demand," it added.

To an extent, near term-earnings are supported by pent-up demand, low raw-material costs, lower discretionary expenditure and no material increase in credit costs (moratorium impact).

"With reversal in some of these factors and slower economic growth, there are risks to further cuts in earnings estimates. At present the market is factoring in 21 percent earnings CAGR over FY20-22F, which compares to 6 percent CAGR over FY15-20," the brokerage said.

Nomura is selective in sectors and stocks, with preference for exporters, rural consumption and companies likely to gain market share through the crisis.

The Nifty50 has rallied 22 percent since May 18, and in this period India has been an outperformer in the regions and among EMs.

"We see this as a catch-up rally, as the Indian market was a significant underperformer over February to March, with relentless FII selling in March 2020. In this rally, domestic cyclicals have outperformed defensives. After this rally, the Nifty 50 is trading at 19.8x 1-yr forward earnings, the highest in the past decade," Nomura said. The earnings outlook remains challenging, it said. 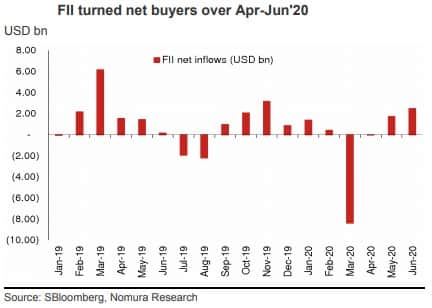 FIIs net sold Rs 89,069.01 crore worth of shares in India during January-April, including Rs 65,816.7 crore of highest ever monthly outflow in March, but they turned net buyers in May-June.

Overall, the Nifty and the Sensex have gained 41 percent from the lows of March 23, with leading sectors gaining in the range of 32-55 percent.

"We believe the market is looking beyond FY21 earnings, and on two-year forward basis, the market is at 15.6x, above the long-term average of 14.4x. The spread between earnings yield and bond yield has narrowed, and is now within fair value zone, in our assessment," Nomura said.