Among the markets analysed, German benchmark DAX rose the most.

It was not too long ago when most of us were celebrating the turn of the decade with much pomp and splendour. At that time, the outbreak of coronavirus seemed like just another seasonal flu that was shaping up in China.

A couple of months later, the situation became alarming but still many of us wrote it off as a health crisis unfolding in the First World. To most of us, coronavirus offered good banter, memes were shared about its name and how similar it is to "Corona beer", some even resorted to racial innuendos targeting people from the North-Eastern states.

After all, India just had cases in single digits and the common man felt well-insulated from the clutches of the virus.

Around mid-February, the gravity of the situation started sinking in. More and more countries started reporting COVID-19 cases which were rising exponentially day-on-day.

On March 11, expressing increasing alarm about mounting infections, the World Health Organisation (WHO) declared the burgeoning health crisis a global pandemic. At that time, there were 118,000 cases in 114 countries with 4,291 deaths. India had about 60 cases with no casualties.

Since then, India has witnessed four rounds of near-complete economic shut down, with the latest one extending till May-end. Nonetheless, the cases have been on a steep ascent, crossing the 1,00,000 mark recently.

The stock market, which was already in a downturn (before March 11), saw a bout of ebb and flow with Nifty correcting over 15.6 percent between March 11 and May 18.

The 50-share benchmark formed the most recent bottom at 7,511.1 on March 24, falling over 39 percent from its all-time high seen in January. Thereafter, a relief rally ensued in the month of April as the Nifty added 14.68 percent, only to succumb to profit-booking in May. Till May 18, the index had dropped 1,065 points or 10.77 percent during the month.

How did India fare compared to other economies

Despite the late bloom of COVID-19 cases, the country is the worst performer among the nine major markets we looked at.

Meanwhile, five economies reported negative returns between March 11 and May 15. After Nifty, Brazil's BOVESPA fell the most at -8.9 percent, followed by China's SSE Composite which dropped -3.13 percent. Other benchmarks that logged losses during the period were France's CAC 40 (-2.42 percent) and UK' FTSE 100 (-1.3 percent).

In India also, the Nifty started to trade higher after PM Modi announced a package of Rs 20 lakh crore. While the market gave a thumbs up to the headline number, the details announced later, failed to cheer up the market. 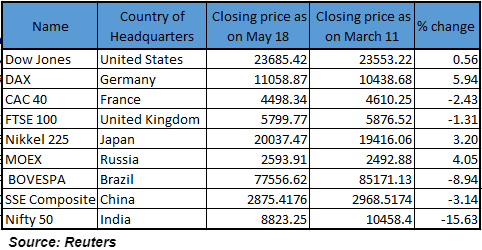