The Sensex fell 1.7 percent during the week and the Nifty declined 1.6 percent, while the BSE midcap was down 0.3 percent and the smallcap index 1 percent.

Worries over a second COVID wave and weak global cues dragged the indices over a percent in the volatile week ended March 26. Both BSE Sensex and  Nifty50 closed at crucial levels of 49,000 and 14,500, respectively. 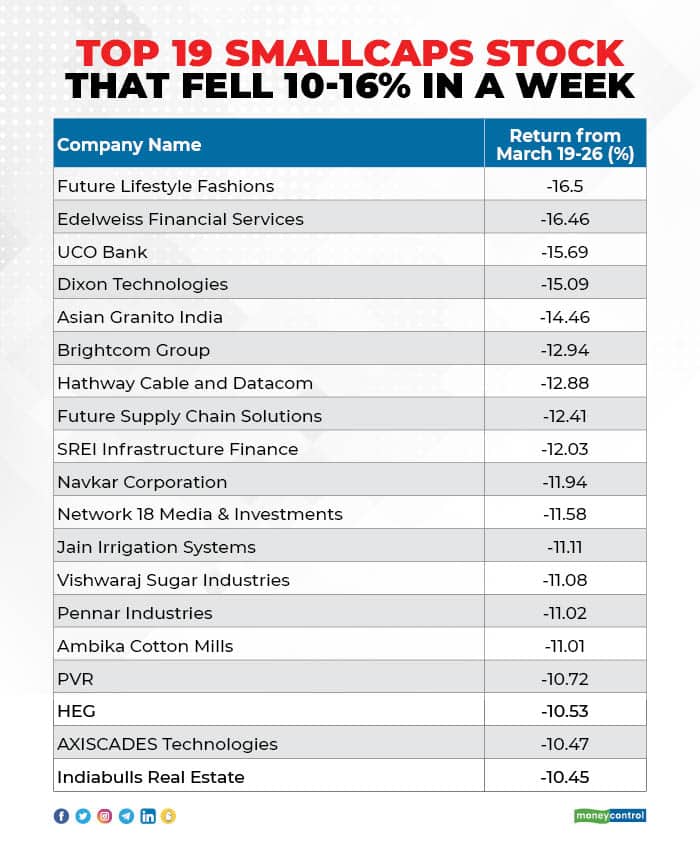 On the weekly chart, the Nifty bounced back from the weekly 10-period EMA. The moving average is now at 14,590 and the Nifty closed just below it, as per week's close, said Nagaraj Shetti, Technical Research Analyst, HDFC Securities.

"Previously, such downside violations of this EMA has offered strong upside bounce in the subsequent weeks in past," Shetti said. "Having recovered from the lows in the last two weeks, the odds of further upside bounce could be alive in the market."

On the sectoral front, Nifty media index shed 6.6 percent, while Nifty auto and energy indices fell 4 percent each. On the other hand, the Nifty pharma index added nearly 2 percent.

"The market may remain under pressure in the near term amidst weak global cues and fast-spreading second wave of COVID in India, which could impact the pace of economic recovery," said Siddhartha Khemka, Head - Retail Research, Motilal Oswal Financial Services.

Given the likelihood of high volatility continuing in the market for some time, investors would do well by staying calm and gradually accumulating good quality companies on declines in the market, he said.

"FPI poured Rs 22,300 crore this month into Indian equities taking their total inflows to $38 billion as of March 24, 2021. The December quarter flows of $20 billion were in fact the highest ever in any quarter," said S Ranganathan, Head of Research at LKP Securities.

"FPI’s on Friday has emerged as the largest non-promoter owner of financial stocks in India as of the December quarter and we expect this trend to accelerate further during the March quarter," he added.

The Bank Nifty is also expected to move to 34,700 above the resistance at 33,700. The focus should be on FMCG and capital goods, Chouhan added.