172@29@17@151!~!172@29@0@53!~!|news|business|markets|broader-long-term-india-story-intact-like-pharma-nbfcs-ubs--962221.html!~!news|moneycontrol|com!~!|controller|infinite_scroll_article.php!~!is_mobile=false
Subscribe to PRO at just Rs.33 per month. Use code SUPERPRO
you are here: HomeNewsBusinessMarkets

As a base case, we do not expect a strong recovery for the Indian economy but the market expects so, is the word coming in from Gautam Chhaochharia, Head-India Research, UBS Securities.

However, the broader long-term India story is fairly robust and remains intact, says Chhaochharia in an interview to CNBC-TV18. So long-term investors need not worry, but shorter-term, the market is richly valued.

According to him, if the market is expecting a good recovery then spaces like NBFCs are likely to do even better because even when recovery wasn't good, they had delivered good growth and return on equities. He says the house has a overweight on non-banking financials (NBFCs), However they are no longer attractive on absolute valuation terms but on relative terms they are still good. 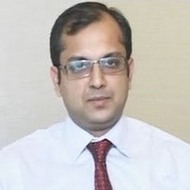 He thinks companies that are into data and petchem, oil and gas would do well. The house is also upbeat on the agri-theme and think entertainment is a secular theme. Entertainment as a space has held its ground despite a sluggish broader economy and relatively sluggish discretionary, he adds.

As a defensive play, he is bullish on pharma space. He likes pharma also because a lot of pessimism has been priced-in into the stocks.

Below is the verbatim transcript of Gautam Chhaochharia's interview to Sonia Shenoy and Anuj Singhal on CNBC-TV18.

Anuj: You have been a bit negative on market for some time now. Your Nifty target is quite aggressive on the way down, do you see this market now at the risk of having topped out a bit?

A: Sort of negative call on the gross domestic product (GDP) and the growth recovery is playing out in India where growth has been a bit sluggish and disappointing.

On the other hand, markets have continued to rally up and that is why we try to attribute the reason behind this. So one big reason is obviously what is happening to global interest rates and the hunt for yield apart from the interest rate coming down in India.

However, theoretically if you look at the framework we have, typically a lower interest rate also coincides with lower inflation, which should theoretically in longer-term mean nominal growth is also lower. So the discounted cash flow (DCF) or the net present value (NPV) should not be impacted. But in the practical world, when your yields go down and when you are looking at a world where a lot of the sovereign debt is negative territory then there is a hunt for it. That is what is helping emerging markets, that is what is helping India.

If you look at India -- what you mentioned about India this week but even year-to-date (YTD) India has underperformed emerging markets in dollar terms while the correlation with emerging markets and global markets is near all time highs. So clearly, the global factors, the global lower rate factors is helping India markets per se a lot. This is a largely price to earnings (P/E) multiple of rerating not the earnings growth playing out.

On the other hand, the markets are expecting a reasonably strong second half recovery. That is where the key would be for the market direction into the next couple of quarters.

Sonia: The pocket that did well this week and that everyone is buying into these days is consumption. We saw lot of auto stocks Maruti, Eicher Motors, TVS Motor hit new highs this week. What is your own view? I see that you do like a lot of consumption stock especially in the midcap space but do you see more value here?

A: Top-down framework suggests that the recovery hope from consumption second half by the market will likely bit disappointed primarily because in our view, monsoons and Pay Commission -- the two big drivers of this growth -- are likely to have far lesser impact than the market believes in. We just released our annual survey. So we run a survey of consumers, which is done by our market research agency every year across India. This is the third year we are doing it. It is an urban survey pre-festive season across fifteen cities and that survey suggests to us that the pace and scale of recovery in urban demand in second half is likely to be similar to what we saw last year rather than a big acceleration.

Anuj: The sector which has been doing well is non-banking financial companies (NBFCs) and so many stocks -- do you justify these price to book value at this point or do you say that the return on equity (RoE) has been so strong for some of these companies like Bajaj Finance, how do you approach this pocket? Staying out hasn’t helped but valuations clearly are not on your side.

You have to remember that over the last couple of years, where growth recovery hasn’t been that strong, these companies, this sector has delivered a superior earnings growth in RoEs. So if the market on one hand believes or expects a strong recovery in growth rates in India, which is not in our base case but that is what the market is expecting then this sector should do even better.

Sonia: The other big stock of the week was Reliance Industries. After so many weeks, finally we saw some outperformance here and now Reliance is up 15 percent in the last three months. I notice that it is one of your preferred companies in your list, what do you see as triggers for Reliance hereon and in the space particularly why would you be bullish?

A: I cannot talk about individual companies but in general, the relevant themes are the data boom in India, which should play out in our view without causing material disruption to the profitability of the broader ecosystem and the oil and gas, petchem cycle is still largely supportive.

Anuj: Looking at some of your other top picks, there are a couple of agricultural themes which you have and couple of entertainment stocks, what kind of themes do you see playing out in some of these stocks going forward?

A: In general, agri theme is about monsoon specifically while we do believe that the impact of monsoons on broader economy and consumption is likely to be much more muted than what the market wants or expects but specifically in the area of agri inputs, that particular segment has had been much more stressed and even a slight improvement does have a much more disproportionate impact on that segment because supply chain, working capital, debt levels etc. So that is the reason why we think that that segment looks good to us.

Entertainment has been one of the secular themes and we are seeing that segment again over last couple of years to three years despite a sluggish broader economy and relatively sluggish discretionary. That is one segment, which has held on reasonably well. Therefore, the outlook in most scenarios going forward is quite comforting for that segment.

Sonia: The next trigger that we have domestically is the earnings season and a lot of people believe that not just the second half of the year but even Q2 you could see a goodish bit of recovery in earnings. What are you forecasting for this season itself and which are the pockets that you would be bullish on?

A: We don’t want to have a forecast ready for Q2 but broadly for fiscal year 2017 forecast is 10 percent growth for Nifty while the street is at 16 percent. So we do see earnings cuts and that is where the survey gives us confidence to our framework.

Sonia: Since you are a bit cautious on the market, just wanted to understand what your recommendation is to long-term retail investors watching right now. Do you recommend them to just keep their powder dry and not invest much because they will get better return or better investment opportunities over the next three-six months?

A: Cannot make specific recommendations for retail investor but generally speaking, the India long-term story is definitely intact despite the concerns around short-term that is more against the markets exuberant expectation and what is priced in but the broader long-term story in India is fairly robust and remains intact.

For long-term investors, I won\\'t advice any major worries. Near-term yes, the markets do look quite rich and even if I peep into one year forward and see whether markets could be at the end of 2017, which we feel they will start pricing in what happens in FY19 even then the market risk reward seems more balanced versus now but still at the base case, looks like offering single digit positive returns, which is not necessarily the best option given the higher risk involved in equity markets.

Anuj: Your financial year end Nifty target is 7,700. Do you see that still playing out?

Anuj: If for this yearend, your target is still a bit aggressive on the downside the bearish scenario, do you expect some bit of positions in defensives like pharma as protection or do you think even that is going to fall if the markets indeed make a move downward?

A: For markets to make a downward move, two things need to happen. One is earnings and growth has to disappoint and secondly, some bit of global factors about interest rates has to play out. But even otherwise, we are overweight pharma from the defensive market perspective and also in absolute terms also because in our view a lot of pessimism seems to be getting priced in into these stocks.