Tune in on 17th July for the Small Business Virtual Summit with Cisco. Register now!
you are here: HomeNewsBusinessIPO

ULIPs are a hot product now because markets are doing well but would prefer to sell more endowment and protect policies, Deepak Parekh, Chairman, HDFC.

HDFC Standard Life is set to join the IPO bandwagon, the life insurance firm's public issue will open on November 7 and will close on the 9. The company has fixed the price band at Rs 275 to 290.

The Rs 8695 crore initial public offering (IPO) of private private life insurer HDFC Standard Life Insurance will open on November 7 and close on November 9. At the upper end of the price brand, the insurer has been valued at Rs 58260 crore.

Deepak Parekh, Chairman, HDFC when asked why the pricing value was so aggressive said that HDFC Life's margins, return on equity (RoE) and persistency was much better than other players. He said the company’s persistency for 13 months was at 82 percent and the solvency ratio was 200 percent. The RoEs for the first six months stood at 26.5 percent and new business margins were 22.5 percent.

So, he does not think the pricing is aggressive. The company does not need capital for growth, he said, adding that they have now entered the pension business, which is also doing well. 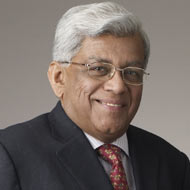 He said today the solvency is 200 percent and if it comes down and more capital is needed then HDFC will infuse money and have no plans to bring down HDFC’s stake in HDFC Life below 50 percent.

He said, currently their ULIP share in the industry is lowest at 50 percent. However, would like to sell more endowment policies and protect policies. He said today ULIPs are a hot product because markets are doing well but what will happen when markets start correcting.