As it plans to launch full scale operations, Tata Power has raised questions over the lack of privacy guidelines, quality of India-made drones

After undertaking proof of concept for over five months, Tata Power is gearing up to start full-fledged drone operations for maintaining power lines, checking on theft of lines, remote power meter reading, and so on.

Apart from buying its own drones, the company plans to develop its in-house drone infrastructure with a dedicated AI-based data analytics module and appointing its own drone pilots, Kiran Gupta, the CEO and executive director of Powerlinks Transmission, told Moneycontrol.

Powerlinks Transmission is a joint venture between Tata Power and Power Grid Corporation of India.

However, Tata Power is still concerned about adopting Indian-made drones over foreign-made ones citing quality issues. Gupta also highlighted privacy and other policy-related issues that may arise as a result of such operations, and delays arising out of the DigitalSky platform under the Directorate General of Civil Aviation, and wants the government to address them.

Between November 2021 and March 2022, with two drones hired from a service provider, Tata Power took up operations and maintenance (O&M) of power lines from Delhi, GIS survey of Odisha power distribution companies or discoms which includes detecting power theft, and remote meter reading in rural areas.

Along the 1,166 km Delhi line of Powerlinks Transmission—which runs from Siliguri in West Bengal to Purnea and Muzaffarpur in Bihar, then to Lucknow, Bareilly and Mandola (about 30 km from the capital) in Uttar Pradesh—visual and thermal inspection of around 225 towers and line corridors were taken up using drones. 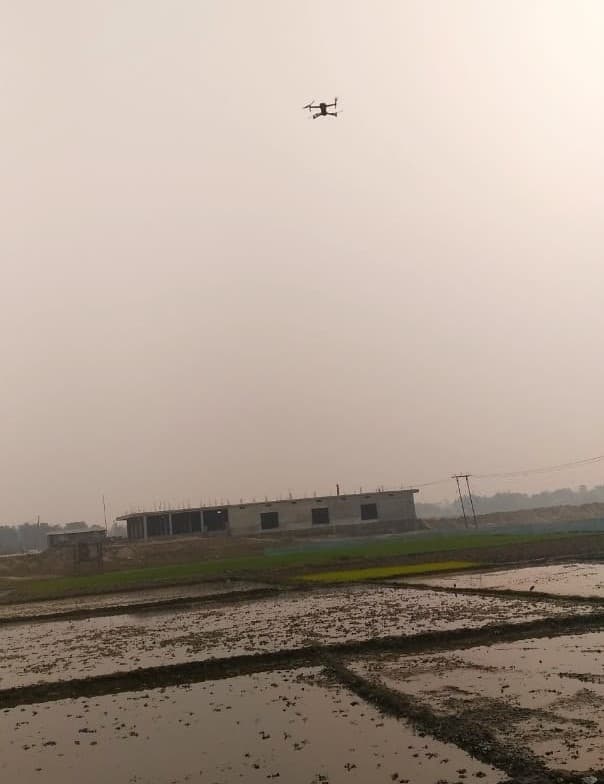 A drone hovering over a farmland during the pilot taken up by Tata Power | Source: Special arrangement

“These represent only 10 percent of total towers. But this 10 percent is the most critical and vulnerable. These are lines that cut across forests and tough terrains, remote villages, farmlands, irrigation canals and so on,” Gupta said.

Some of the towers in West Bengal were also submerged as a result of floods. Taking up manual power maintenance in these areas is a cumbersome process and is unsafe as well, she said. “We could make the drone fly and capture images of those vulnerable towers especially, which were otherwise very unsafe to climb,” she said. During the drone pilot project, Tata Power was able to identify defects such as power tripping and broken insulators, apart from detecting hotspots and foreign objects such as stuck kites or birds’ nests, and so on.

Gupta said against the seven or eight towers that could be inspected under manual operations, with drones they were able to inspect 10 to 11 towers. Also, the company made big savings on fuel for vehicles to visit the spots.

In the Odisha discom leg of the pilot, Tata Power took up detection of power theft in remote locations.

“Generally, we used to conduct raids in the late evenings, late nights or early mornings. However, there is a limitation when we conduct these raids as the lines are amid communities. But with drones, we can really capture and can take those images without anyone in the public noticing us,” Gupta pointed out. “That's a misuse and theft of power. We were able to capture that with the drone,” she said. “We have really been able to understand how the electricity connection from one cable is being tapped and being taken to another place.”

As for remote meter reading in rural areas, Tata Power was able to save around 30 percent in cost with the help of drones. “Earlier, we were giving around Rs 8 per meter reading. However, with drones we incurred an expense of only Rs 5,” she said.

Even though Tata Power has bluetooth-enabled meter readers in a few areas, Gupta informed that due to limitations in distance and network, they were not able to manually read meters. With drones, she added, they were able to. A drone detects broken insulator during the pilot taken up by Tata Power | Source: Special arrangement

“We intend to optimise that cost because we are a regulated business, and we can't afford to be giving that much cost to services. And since we have a good in-house infrastructure, we intend to kind of develop the portal for image analytics. Going forward, we want to use AI. We intend to train the model by loading more and more images into the model,” Gupta said.

As for personnel, she said that Tata Power plans to nominate two officers who would be trained as drone pilots. Gupta added that they were thinking of using drones not just in the transmission side of the business but also in distribution.

As of now, Tata Power owns two drones, both DJI Mavic 2 Enterprise models. Mavic drones (from service providers) were also used in the pilot. China’s DJI is a major player in the drone industry with a commercial market share of 54 percent.

However, in a bid to boost indigenous drones, the Indian government recently banned the import of drones, which brings its own problems.

“Although we have started manufacturing them indigenously, we need to be a little more robust on design,” Gupta said. “We are going to take this (purchasing) up now, but this has been notified as a challenge.”

A recent report released by the World Economic Forum on the  2021 Medicine in the Sky Project showed that drones which were taking up pilots for delivering medicines did not work properly in four cases.

Take for instance, that a case of power theft has been detected through drones. With the image, Tata Power can possibly issue a notice, or take much stricter legal recourse by booking the consumer under charges of misuse. However, the company is now questioning whether these drone images will be acceptable as evidence. “There is no clarity in this regard,” Gupta said.

She commended the government for easing drone regulations in the country but pointed out that there is a lack of clear policies in areas associated with drone operations.

For instance, consumers can very well claim infringement of their privacy for such operations. “The government needs to come out with laws on privacy or data protection. Because once these are notified, there would be more clarity on the dos and don'ts,” she said.

She also pointed out that permissions on the DigitalSky platform were taking a lot of time. Gupta appealed to the government to speed up permission processes.