The government has lined up more meetings on the issue of FDI in e-commerce and whether e-marketplaces are bending the rules. On March 19, the DPIIT will meet with industry bodies FICCI, CII and Assocham, while on March 25, it will sit down with e-marketplaces like Flipkart and Amazon India.

At a meeting with the Department for Promotion of Industry and Internal Trade (DPIIT) on March 17, the Confederation of All India Traders (CAIT), the Retailers Association of India (RAI) and others have demanded that the government should stop e-marketplaces from selling inventory on a B2B basis that is purported to be sold by them on the platform. To do this, they asked DPIIT to clarify the definition of the inventory-based model and marketplace model to remove any ambiguity in the rules.

The retailers have also demanded that an independent national regulator be instituted to overseeing the sector and that the government should have the right to seek information and audit the accounts of the entities involved in e-commerce. The need for immediate action on violations such as deep discounting, preferential arrangements with sellers, discriminatory treatments have also been pointed out. 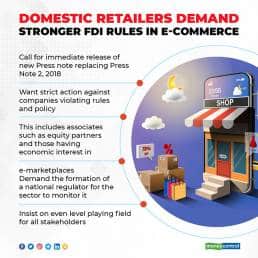 "However, due to creative interpretations about the relationship between marketplace and sellers, these companies are controlling either the sellers on their platform or their inventory. The control of foreign marketplace platform entities over the sellers on their platform, enables them to do anti-competitive practices such as predatory pricing and deep discounting through capital dumping that has led to closure of a large number of small merchants/kiranas leading to job loss for lakhs of people every month," CAIT said in a statement.

"The industry was plagued by deep discounting, capital dumping, exclusive seller agreements and lack of a level playing field. The growing contraventions by these foreign-fed entities that too during pandemic has been targeted to completely uproot the domestic retail sector in India," CAIT Secretary General Praveen Khandelwal, said.

RAI has asked for Indian-owned and Indian-managed retail enterprises to be given better access to  funds both local and international to become globally competitive. "While modern retail in India is about two-decade old, most modern retailers have infact been present only since the last 15 years.

There is a need to support modernisation of retail in the country, especially since it means increased employment and higher contribution to the country’s GDP," RAI said in a statement.
Subhayan Chakraborty
TAGS: #Amazon #CAIT #E-commerce #FDI #Flipkart #India
first published: Mar 17, 2021 09:25 pm