The Indian central bank looks at a variety of economic indicators before making its interest rate decision. How have some of these data points moved since the Monetary Policy Committee last met?

The three-day meeting of the Reserve Bank of India’s (RBI) Monetary Policy Committee (MPC) started on August 3. Headed by RBI Governor Shaktikanta Das, the MPC is scheduled to announce its decision on August 5 at 10:00 am.

As per a Moneycontrol survey, the MPC is likely to raise the repo rate by at least 35 basis points this week. While voting on the interest rate decision, the committee's members will examine a range of economic indicators to understand where the economy stands.

Moneycontrol takes a closer look at the movement of five key indicators since the MPC last met in June, when it voted to increase the repo rate by 50 basis points to 4.9 percent. It goes without saying that this list of indicators is not exhaustive, but they are crucial in representing the state of the Indian economy. The obvious starting point is inflation. The June print of Consumer Price Index (CPI) inflation came in at 7.01 percent. Although the number was in-line with the expectations, headline retail inflation has now spent 33 consecutive months above the medium-term target of 4 percent and six straight months above the 6 percent upper-bound of the RBI's 2-6 percent tolerance range.

When the MPC last met from June 6-8, the latest inflation number it had was for April, which stood eye-wateringly high at 7.79 percent. Since then, inflation has eased, and according to most economists, likely peaked. Core inflation has moved similarly, but remains above 6 percent.

The elevated global crude oil prices have been a key driver of domestic inflation, with retail fuel inflation standing at 10.39 percent in June. A variety of forces have led to a rapid depreciation of the rupee in recent months, with the Indian currency declining 6.6 percent against the US dollar so far in 2022.

While pressure on the rupee has eased marginally in recent days, it hit multiple all-time lows last month and crossed the 80-per-dollar mark for the first time on July 19. While the RBI does not target any level for the rupee, it tries to reduce the volatility in the exchange rate. Moreover, extreme weakness in the rupee is unlikely to be the sole determinant of monetary policy.

The difference between the interest rates prevailing in India and developed countries such as the US is a key determinant of inflows into India. So far in 2022, foreign portfolio investors have withdrawn $28.69 billion from Indian financial markets, although July saw a minor inflow of $239 million. Rapid tightening of monetary policy by the US Federal Reserve can narrow the interest rate differential, as seen between March and May. However, the difference between Indian and US government bond yields has risen since and remained pretty stable around 450 basis points in the last two months.

"...it is a prudent strategy to maintain a certain minimum amount of interest differential, failing which there could be further adverse consequences for the rupee over the near to medium term," noted Kaushik Das, Deutsche Bank's chief economist for India.

While inflation now comes first in the RBI's sequence of priorities, it does not want to sacrifice growth completely either in its fight against price pressures.

As such, rising demand for loans is an indication that the economic recovery is taking hold. Latest data shows non-food bank credit was up 13.7 percent as on June 17. Speaking at a public event last month, Governor Das had said RBI's internal data showed credit growth had crossed 14 percent. 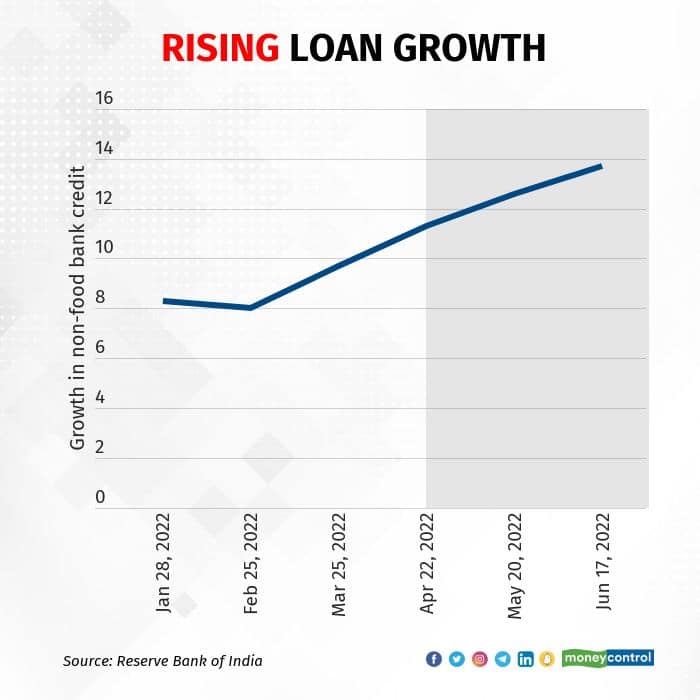