Govt is shooting itself in the foot with borrowing binge

The government will have to use nearly half of its net tax revenues towards interest payment of its past borrowings, an unproductive expenditure

About the data: Interest rates on education loans for all listed (BSE) public and private banks have been considered for data compilation; Banks for which data is not available on their websites have not been considered. Data collected from respective banks' website as on September 3, 2020. Banks are listed in ascending order on the basis of interest rate i.e. bank offering the lowest interest rate on education loan (loan amount of up to Rs 20 lakh) is placed at top and highest at the bottom. Lowest rates offered by the banks on loan up to Rs 20 lakh has been considered in the table. EMI is calculated on the basis of Interest rate mentioned in the table for Rs 20-lakh loan with tenure of seven years (processing and other charges assumed to be zero for EMI calculation); *excluding GST

Personal Finance 101 tells you to keep your loan repayments at less than 50 percent of your income. If we stretch this rule to the government, the Centre would struggle to stick to it.

The government earns mainly from taxes and spends on various schemes for the economy. It always spends more than it earns and, therefore, runs a deficit every year. For a growing economy such as India, there is no escape from a fiscal deficit. The government borrows from the bond market to bridge this gap. 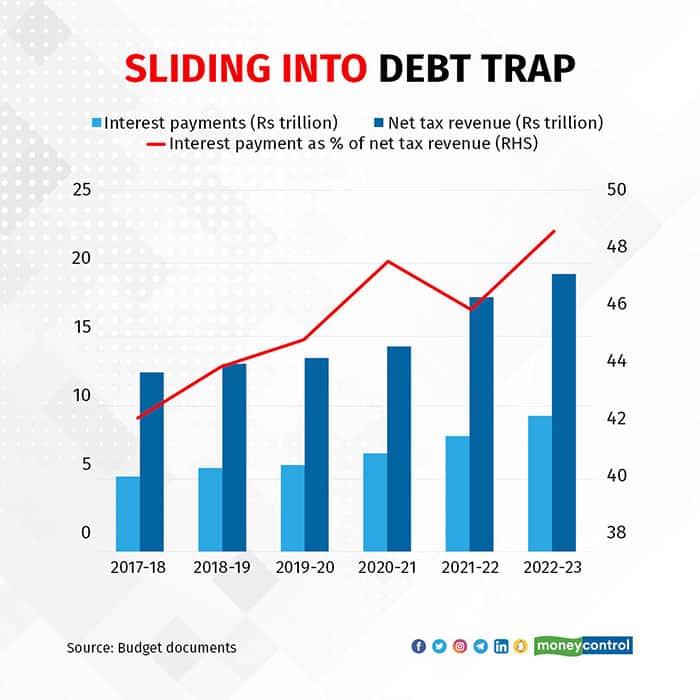 What is detrimental is that the market borrowing is slowly turning unsustainable. As the chart shows, the government will spend nearly half of its net tax revenues towards interest on its past borrowings. Net tax revenues form the bulk of the government's revenue and are fairly stable. Non-tax revenues such as divestment proceeds tend to be lumpy and volatile.

The Budget has pegged gross market borrowing at Rs 14.95 lakh crore, 43 percent higher than the current year's level. Future interest payments would be even higher. Add to the mix a rising interest rate cycle, and the government's interest payments increase further.

If half of its income goes into interest payments, the government is left with less to spend on the economy. It will need to grow its tax revenue or sell its assets. A prudent way is to restrain high borrowing. The government may not be in a debt trap but it is slowly sliding into one.