After 190 basis points of rate increases this year, including three half-point moves, the six-member Monetary Policy Committee led by Governor Shaktikanta Das has more than one reason to switch to smaller increments: inflation is coming off a high and headwinds to economic growth are increasing.

India’s central bank will probably start slowing the pace of interest-rate increases on Wednesday, signaling it’s near the end of its aggressive tightening cycle.

After 190 basis points of rate increases this year, including three half-point moves, the six-member Monetary Policy Committee led by Governor Shaktikanta Das has more than one reason to switch to smaller increments: inflation is coming off a high and headwinds to economic growth are increasing. Twenty-nine of 35 economists in a Bloomberg survey predict the benchmark repurchase rate will be raised by 35 basis points, three see a quarter-point move, while one each expect a 10-, 30- and 50-basis-point action.

Das will announce the rate decision through a webcast at 10 a.m. in Mumbai Wednesday, and will address a press conference at 12 p.m.

Here’s what else to watch out for:

Analysts will be keenly watching for any hints of the beginning of the end of the rate hike cycle. US Federal Reserve Chair Jerome Powell has already signaled a down-shift, a source of comfort for Indian policymakers.

Bond market traders, in particular, would interpret a dovish tone as a clear sign of rates peaking. Falling commodity prices and dampening demand may provide reprieve.

“The pace of rate hikes will be tempered as external headwinds have eased considerably after the recent sell-off in the dollar, oil prices, and the US Fed’s expected pivot to smaller rate hikes,” said Dhiraj Nim, economist at ANZ Group. It would be crucial to scrutinize the language of the monetary policy committee’s stance as both “nominal and real policy rates are now entering growth restrictive territory.”

While most economists expect the RBI to go for another rate increase in February, JPMorgan Chase and Co.’s Sajjid Chinoy said December’s 35 basis points hike could be the last in the cycle. 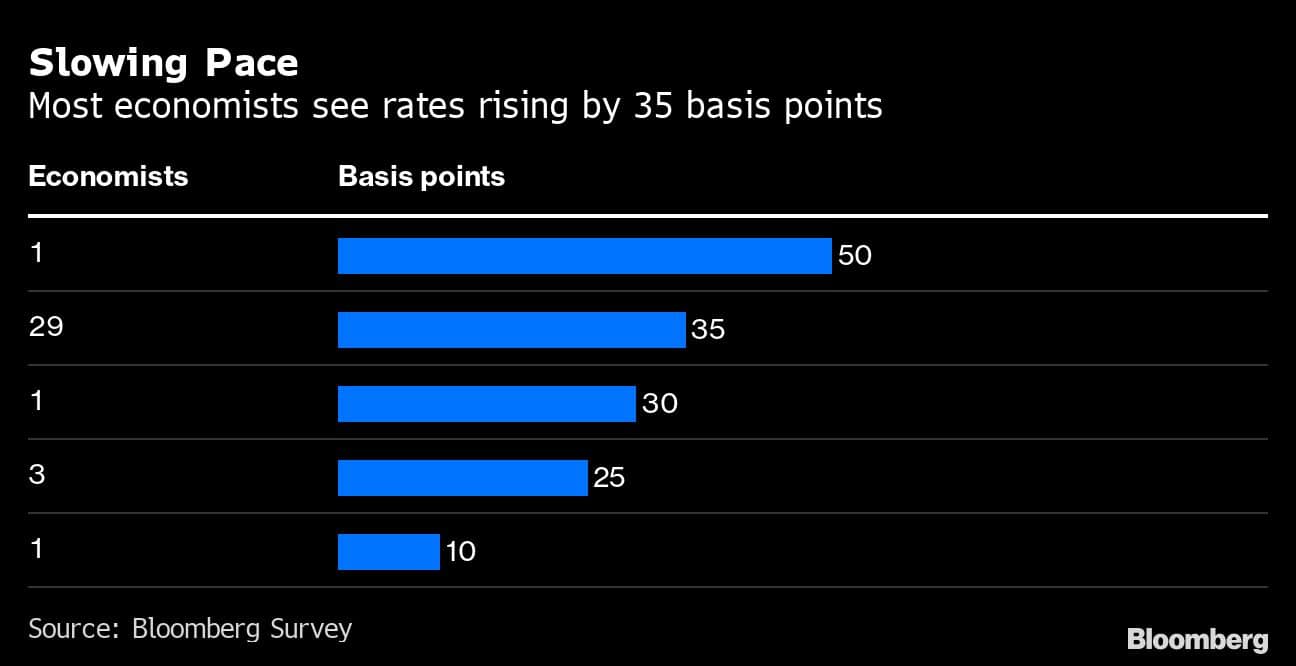 Economists, however, seem to differ on the possibility of a change in stance. The stance may stay unchanged at “withdrawal of accommodation” while maintaining a cautious tone, said Chinoy.

But others feel a change in stance may offer the RBI flexibility to calibrate its actions depending on the incoming data. “We expect a unanimous MPC vote to change the policy stance to neutral from accommodation,” said Abhishek Gupta of Bloomberg Economics.

The governor’s view on the growth-inflation trade-off will also be closely tracked, especially after Finance Minister Nirmala Sitharaman, said economic expansion was the top priority for the government now.

Global headwinds will be a key risk for next year’s growth outlook, said Kaushik Das of Deutsche Bank AG, adding that he doesn’t expect that rate hikes to continue beyond the December policy. The bank expects the RBI to keep its inflation and growth forecasts unchanged at 6.7% and 7%, respectively, for the fiscal year ending March.

The RBI may also broadly spell out the roadmap to tame inflation even as it would refuse to discuss details about the letter it wrote to the government explaining why it failed to keep inflation within its 2%-6% target band for three straight quarters. India’s foreign exchange reserves have climbed over $20 billion in the last three weeks to $550.14 billion as of Nov. 25, giving the central bank more control over the exchange rate. The rupee saw its first monthly gain this year in November.

The recent rally and sharp flattening in the rupee swap curve suggest that markets are pricing for the approaching end of RBI’s hike cycle with the repo rate currently priced to peak at around 6.50% by the first quarter of 2023, according to DBS Bank Ltd. Benchmark yields have eased after breaching 7.5% in October, helped by a drop in US yields.