Chart of the Day: UPI on fire, cheques burn but cash endures

Cheques have plummeted as a mode of transactions to just 27 percent of GDP in FY22 from as high as 50 percent in FY16. 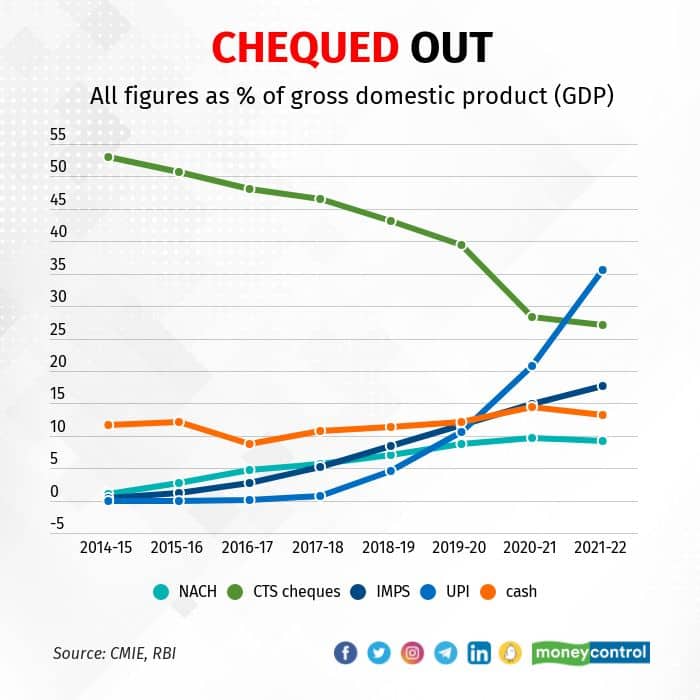 India’s payment system has gone through a transformation in the past decade, and demonetization has hastened the speed of the changes. Even as digital payment systems have grown exponentially, cash still remains a critical component in financial transactions. As a percentage of gross domestic product (GDP), currency in circulation (CiC) or cash with the public is higher now than before demonetization. At the same time, Unified Payment Interface (UPI) has dwarfed all other retail payment systems in terms of transactions and surged ahead. The ratio of UPI transactions to GDP has risen sharply even as cash continues to endure. What has suffered are cheque payments. Cheques have plummeted as a mode of transactions to just 27 percent of GDP in FY22 from as high as 50 percent in FY16. Part of this has been also due to the regulator’s efforts to reduce paper transactions in the economy and nudge even larger transactions towards digital routes. Most digital platforms, from National Automated Clearing House (NACH), national electronic transfer funds (NEFT), mobile phone based Immediate Payment Service (IMPS) and other internet banking modes have been growing fast. That said, UPI’s growth remains the most spectacular. While cheques may slowly recede to the margins of payment, analysts believe cash transactions will persist given the anonymity they give to the user.
Moneycontrol News
Tags: #Digital #RBI #UPI
first published: Jun 22, 2022 05:03 pm